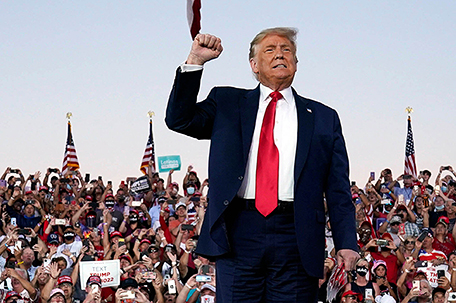 What a difference three weeks makes in America! With former President Donald J. Trump now out of office, his last-ditch effort to claim that the election was stolen continues to stain his legacy on the eve of his 2nd impeachment trial.

Following a corrupt president who challenged every phase of the American democratic system and the Constitution during his time in office has created an uprising of far right militia groups and fanatics that the country hasn’t seen since the Civil War.

On January 6, thousands of Trump supporters showed up and listened to the speeches of President Trump, his attorney Rudy Giuliani and Donald Trump, Jr. as well as Senators Josh Hawley and Ted Cruz from the Ellipse near the White House at the “Save America Rally.”

Trump summoned his followers to Washington D.C. to rally and protest the election results that were going to be certified  by the senators confirming Joe Biden as the next president of the United States of America.

At the rally, the embittered former president riled up protesters, saying, “We will never give up. We will never concede. It doesn’t happen. You don’t concede when there’s theft involved. Our country has had enough. We will not take it anymore, and that is what this is all about. And to use a favorite term that all of you people really came up with, we will stop the steal…” and, “We fight like hell, and if you don’t fight like hell, you’re not going to have a country anymore.”

We understood Trump’s obsession with winning, but his dismissal of a national election that proved to be fair should never have been a reason for a revolution against the country he claimed he would “make great again.”

Considering the number of militia groups backing his false promises and claims of election fraud and challenging states with no actual proof of an irregularity, the insurrection mob should have all been registered voters.

This kind of rhetoric became deadly and resulted in the deaths of five people, including Capitol police officer Brian Sicknick,  who was killed in the line of duty by the insurrectionists.

The big question is, how do you believe you won an election that was challenged in the courts with over 42 cases and that only won one challenge?

This was a farce, and the Republican party and President Trump should have accepted the official results of the election and prepared themselves for the 2024 run instead of creating more division that led to the storming of the Capitol.

Trump’s entire presidency was marred with mistruths, lies and misinformation, so much so that the Washington Post stated that he made 30,573 false or misleading claims during his time in office. Nearly half came in his final year.

Tyler Perry, the actor and business mogul spoke with Gayle King on January 26 about the insurrection and Trump’s upcoming Impeachment trial.

“So many people watched the siege — so many people sieged the Capitol that slaves built right,” Perry said. “You’ve got these Confederate flags walking through where slaves actually built this Capitol.  And for me, it was heartbreaking on so many levels, because I believe in an America that is more inclusive than that.”

“That we all could disagree and still move forward in what we’re doing as a country,”  Perry continued.  “So, to see that kind of division and to see what happened there, I was torn and it was shocking, heartbreaking and I’m glad it’s over. I’m glad we’re moving toward healing.”

There are now more than 170 Trump loyalists that are now facing federal charges. President Trump pardoned about 143 people prior to leaving office — none were from the insurrection that took place on January 6. These people have lost their jobs, careers, pensions, families, prominent advertisers and more importantly, their freedom.

The smartest thing that some of his supporters are now doing is changing their Republican party affiliation. Over 30,000 of them have done so since the insurrection.  This is the price people are paying and the shame of being a “Trump Phanatic.”

“We can now add January 6, 2021 to that very short list of dates in American history that will live forever in infamy. …the final, terrible, indelible legacy of the 45th president of the United States-undoubtedly our worst.” said Senate Majority Leader Chuck Schumer (D-N.Y.).

Trump now finds himself as a disgraced leader and the worst president in American history to be impeached twice.

“They should be prosecuted,” Mrs. J.H.S of West Philadelphia said. “But nothing’s gonna happen. I don’t think that they’ll be locked up. And some maybe let go because they’re for Trump.”

President Joe Biden said in a CNN interview, as his new administration is being confirmed and sworn in by senators who will be part of the impeachment trial as jurors and witnesses , “This has to happen.”

The trial is set to begin the week of February 8.