Trump’s flailing will get more desperate — and more dangerous 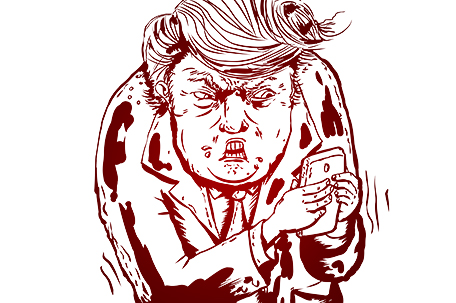 Since the striking victories of Democrats up and down the ballot in 2018, President Donald Trump has been flailing more and more wildly.

He set new records for the length of the government shutdown, watched his defense secretary resign after suddenly announcing the withdrawal of troops from Syria, forced his attorney general to resign, found it difficult to find a permanent replacement for his departing chief of staff, and tweeted that he is “all alone in the White House.”

Quietly, the unrelenting investigation of Robert Mueller becomes ever more ominous. Now the new Democratic majority in the U.S. House of Representatives will probe the corruption of this most corrupt administration, from Trump’s business dealings to the corporate lobbyists who are running entire departments in the interests of their once and future employers.

Essentially, Trump now has three choices. He can stay in office and be impeached. The evidence of high crimes and misdemeanors is building each day, from trampling election laws by payoffs to keep his mistresses quiet to blatant self-enrichment that surely offends the Constitution’s ban on emoluments, to open and secret efforts to obstruct justice.

Democrats will no doubt wait for special prosecutor Mueller to issue his report. They will wait to see if Republicans, alarmed by their sinking poll numbers, begin to separate themselves from Trump. Sen. Mitt Romney’s blast at Trump may be an early warning of what’s likely to come.

Hearings on the impeachment of the president are inevitable. Impeachment in the House is likely. Whether the Republican-led Senate will protect the president remains to be seen.

If not impeached, Trump could stay in office and be disgraced. Disgrace appears unavoidable. He lost the popular vote to Hillary Clinton by 3 million votes at a time many Americans were desperate to change things.

Republicans lost several key congressional races last fall. That’s when the economy was at its best, and Trump’s foreign policy chaos hadn’t yet been felt. Two years from now, if he chooses to run for re-election, Trump will try to pull the Electoral College equivalent of an inside straight again, but he is most likely to be routed, bringing down with him many of the Republican senators who have lacked the backbone to stand up to him.

At the same time, the investigations of his various business dealings, his tax returns, his conflicts of interests will end in myriad lawsuits, if not criminal charges. Once he is defeated, Trump will face not only unending lawsuits for damages, but the real possibility of jail time for himself or his family or both.

Alternatively, Trump — the deal maker — could cut a deal to define his fate. After the Mueller report is issued, as the congressional investigations accelerate, as various criminal investigations begin, he could seek to negotiate his way out. Cut a deal that would give him and his family immunity from criminal liability and possibly civil liability in exchange for his resignation, sparing the nation the agony of what will inevitably be an ugly, divisive fight over impeachment and over criminal indictment after he is defeated.

Americans tend to forgive and forget, once an offender resigns. President Gerald Ford took a hit for pardoning President Richard Nixon, but Nixon survived and regained some of his stature with books on foreign policy. Pelosi and Schumer might take a hit for cutting a deal with Trump, but Trump could retain his freedom and his celebrity, with a base surely willing to support him in the wilderness.

It has come to this: impeachment, disgrace or resignation. Trump, no doubt, will rail against his fate. He’ll claim he could be vindicated in court or in Congress or in the elections. His twittering will grow more frantic and more venomous.

His impulsive and destructive behavior — pulling troops out of Syria suddenly and then reversing position and reversing again, shutting down the government over a wall that won’t be built, using the bully pulpit to try to intimidate his former associates who are testifying against him — will get ever more dangerous.

His flailing only deepens the hold that he is already in. Trump never expected to win the presidency. He clearly might find it sensible to save his fortune and freedom by resigning from a position he never expected to hold.