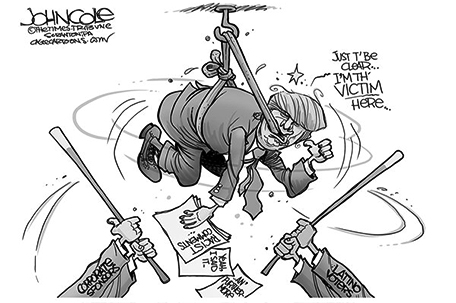 Donald Trump is once again the GOP’s go-to guy when it comes to breathing life into the swatch of the party’s disconnected and alienated hard right faithful.

Here’s why he’s so important in that respect.

Polls show that African-American voters will, as they have done in every election spanning the last half century, give eight to nine out of their 10 votes to likely Democratic presidential standard bearer, Hillary Clinton. The figures won’t look much different in their votes for the House and Senate races either.

This means only one thing and that’s if the GOP is to avoid the loss of the popular vote in 2016, the sixth time in the last seven national elections, there has to be something close to a crusade to the polls by the GOP’s traditional base of older white males from the South, Midwest, suburban and rural areas. But they have to be motivated, aroused, even inflamed to stampede to the polls. This only happened in times past when there were wedge issues such as abortion, affirmative action, and gay rights available to use. There’s some talk about trying to whip up some passion among the hard right and ultra-conservatives over the Confederate flag but that’s too risky, polarizing, and close to openly touting bigotry.

The one issue that does have some possible shelf life to stir the juices of these voters, however, is illegal immigration.

This is where Trump fits into the GOP’s under the table political calculus. He currently flirts with the top spot in popularity polls, draws big excitable crowds wherever he goes, and gobbles up tons of media attention. The GOP gamble is that some of that anti-immigrant vitriol will translate into a flock to the polls of the aroused, but disconnected, lapsed GOP faithful in 2016. In a sense, it’s a low-risk gamble because Trump has absolutely no chance of snatching the GOP presidential nomination.

Trump joins Sarah Palin as the most polarizing Republican in recent political memory. As with Palin, the GOP pragmatists who control the money, media spin and party apparatus will do everything they can to maneuver and massage the primaries and convention to ensure that Trump dies a quick political death. One clue to that is even as Trump barnstorms across the country speaking to rock star-like crowds and adoration, the  silence from most of the GOP candidates about him and what if any role he would play in the election is deafening, with two notable exceptions, Jeb Bush and Lindsay Graham. They feign shock at his rhetoric and the supposed potential damage it does to the GOP in the long term.

Yet, they’re careful not to call for his drumming out of the GOP.

The GOP’s good cop/bad cop ploy with Trump isn’t new. Four years ago, he had serviceable value with the issue of President Barack Obama’s supposed foreign birth. For a time, he grabbed a lot of press, stirred up debate, revved up some passions, and had the president and the Democratic Party on its heels. The issues helped Trump become a  political cause celebre in the run-up to the 2012 presidential contest. Although he knew it was a taboo subject to raise in polite political circles, a significant number, if not a majority of Republicans actually believed or wanted to believe that Obama’s birth was a legitimate issue to dump back on the political table. This was not an insignificant point.

More than two dozen lawsuits and petitions were subsequently filed in various state courts contesting Obama’s U.S. citizenship. The Supreme Court’s eventual refusal to demand that Obama pony up his birth certificate did absolutely nothing to take any steam out of the movement. If anything, it probably added some vapor to it, by convincing more that the Courts are in cahoots with the Obama White House to keep the real “truth” about his imagined foreign birth secret from the American people.

Meanwhile, 2012 GOP presidential contender, Mitt Romney, and the entire GOP establishment denounced Trump for dredging up the phony issue again. And in a political self-righteous pique, they pretended to distance themselves from him claiming he did not represent what the GOP purportedly stood for.

This same tired script has been dusted off, recycled, and plopped back into the GOP political reading room again. Trump and the GOP will use it to provide fodder for media sensationalism, while stoking the frustration and rage of packs of unreconstructed bigots, America firsters, and ultra-conservatives. All of whom it’s hoped will show up in big numbers during the primaries and most importantly during the general election. Trump is the GOP’s trump card to try and make that happen.