Trump did the right thing 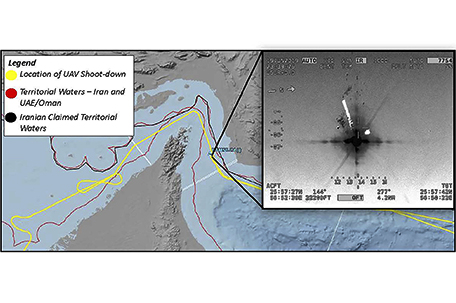 ABOVE PHOTO: This image released Friday, June 21, 2019 by the U.S. military’s Central Command shows what it describes as the flight path and the site where Iran shot down a U.S. Navy RQ-4A Global Hawk in the Strait of Hormuz on Thursday, June 20, 2019. Iran says it shot down the drone over Iranian territorial waters. Iran’s Revolutionary Guard shot down the drone amid heightened tensions between Tehran and Washington over its collapsing nuclear deal with world powers. (U.S. Central Command via AP)

In the last week, President Donald Trump suddenly reversed two major decisions. He announced he would not begin mass deportations of those who are living in the country illegally, which he previously threatened to do, and he pulled the plug on a bombing attack on Iran, even as the military jets were on the runway.

Critics argue that Trump’s reversals undermine his credibility and sap American authority. Cynics discount the decisions, saying even a broken clock gets the time right twice a day.

All that may be true, but it is worth thanking Trump when he makes the right choice.

On Iran, he is surrounded by advisers — like National Security Adviser John Bolton — eager to ratchet up the crisis. Even his former secretary of defense, James “Mad Dog” Mattis, was an advocate of taking on Iran. The so-called “adults in the room” — the folks said to be reining in an impulsive and uninformed president — would have pushed us into another war.

Attacking Iran would have violated Trump’s campaign promise to get us out of “stupid wars.” As president, he repeatedly says that “great powers don’t fight wars without end,” and boasts he’s getting the troops out.

In fact, however, the war in Afghanistan goes on, the troops are still in Syria and Iraq, Trump vetoed the congressional effort to end our role in the Saudi attack on Yemen, and he’s been ratcheting up pressure and sanctions on Iran from the beginning of his administration.

When the Iranians shot down a U.S. drone, the hawks had exactly the provocation they wanted to begin bombing. Trump initially agreed, but then reversed himself, allegedly because he thought a bombing strike that might kill hundreds of Iranians was “disproportionate.” Hopefully, it was also because he remembered his campaign promise, and his sensible instinct that beginning another war in the Middle East would be catastrophic.

Trump has targeted immigrants from the beginning of his campaign, libeling those seeking asylum, implementing truly grotesque policies that rip children from their parents and cage them in unspeakable conditions. He vetoed the bipartisan immigration reform that Congress passed. Now he is ratcheting up the rhetoric for election purposes.

When White House advisers like Stephen Miller reportedly pushed for mass deportations, the president suddenly announced they would begin, and then just as suddenly agreed to postpone them. He may have postponed them simply because the bureaucracy wasn’t ready to act. In any case, the decision was the right one.

The face-off with Iran continues.

The White House announced it has launched a cyber-attack, will continue to punish Iranians with economic sanctions and is considering various covert ways to strike Iran.

The conflict will escalate unless Trump follows the decision not to bomb with a clear plan of action that deescalates the tension and finds a way back to the negotiating table. On the border, Trump only postponed the threat of mass deportations. He clearly wants to make immigrants a target once more in his re-election campaign.

What would make sense is to convene the governments of our neighbors to the south and create a multilateral plan for humanitarian relief and economic development that would alleviate the desperation that forces families to leave their villages and come north.

Without comprehensive immigration reform, Trump’s sudden act of common sense will soon be forgotten. In both cases, Trump’s policies are likely to make things worse rather than better. But at least, in this instance, he chose not to follow the ruinous advice of his aides and supporters. At least that is encouraging.