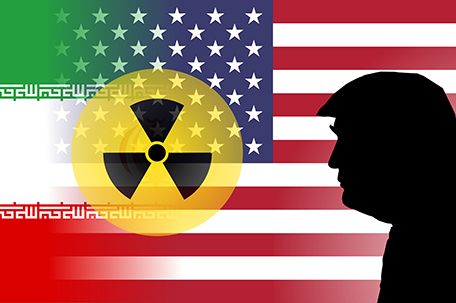 “In theory, the so-called ‘Iran deal’ was supposed to protect the United States and our allies from the lunacy of an Iranian nuclear bomb…In fact, the deal allowed Iran to continue enriching uranium and — over time — reach the brink of a nuclear breakout…”

On May 8th, President Trump announced he was withdrawing America from the Iran nuclear deal. His stated rationale for this action is illogical and fraught with inaccuracies and lies.

Just a little background, the Joint Comprehensive Plan of Action or (JCPOA) or “Iran nuclear deal” was struck between Iran and six world powers – the US, UK, Russia, France, China, and Germany in 2015. It was the signature foreign policy achievement of Barack Obama’s presidency. According to MSNBC’s Andrea Mitchell who interviewed Donald Trump on the day that it was signed, Trump was opposed to the deal as soon as he received word that President Obama had signed it.

His opposition to the Iran deal had nothing to do with its content. According to Andrea Mitchell, he (Trump) had not even seen the deal, let alone read its text before he expressed his opposition to it.

As stated above, Trump said during the speech, “In theory, the so-called “Iran deal” was supposed to protect the United States and our allies from the lunacy of an Iranian nuclear bomb…” Every respected intelligence apparatus, both US, UN and foreign stated that Iran is adhering to the conditions of the agreement. Even former CIA Director Mike Pompeo told the Senate Foreign Relations Committee, “assessment when asked about it on April 12 during his confirmation hearing for secretary of state. “With the information I’ve been provided, I’ve seen no evidence that they are not in compliance today…”

Captain Nativ, the chief of an intelligence section in the “central command” of the Israeli army has stated, “We see a fundamental change in the nuclear challenge from Iran. In the next few years we understand that we don’t really have any threat from Iran because of the deal, I will say from this period to five years from now… So in the long run we can’t really say that it is a good deal or a bad deal. But we can say for the next few years, for the near future we won’t have any nuclear challenge, so for that, that’s is good.” This is a direct contradiction to the lies being spread by Israeli Prime Minister Netanyahu.

As part of his rational for backing out of the Iran deal, Trump said he has proof that Iran has lied, “…we have definitive proof that this Iranian promise was a lie. Last week, Israel published intelligence documents — long concealed by Iran — conclusively showing the Iranian regime and its history of pursuing nuclear weapons.”

According to NBC News, Netanyahu’s presentation on Iran’s defunct nuclear program was high on drama and short on current data. He claimed that tens of thousands of files prove there was an effort to build and test weapons; unfortunately, the presentation did not contain any big surprises for the U.S. intelligence community. There was nothing in the documents, which Netanyahu said were smuggled out of Tehran, to change the American intelligence assessment that Iran is living up to its agreement and is not attempting to restart a nuclear weapons program. All of this was told to the Senate Intelligence Committee by American intelligence officials on Feb. 13, 2018.

Trump continued his fiction by stating, “Over the past few months, we have engaged extensively with our allies and partners around the world, including France, Germany, and the United Kingdom…We are unified in our understanding of the threat and in our conviction that Iran must never acquire a nuclear weapon.” This is a subtle misrepresentation of the facts.  Both French president Emmanuel Macron and German chancellor Angela Merkel, visited Washington last month in last ditch efforts to get Trump to stay in the deal. Boris Johnson, the UK foreign secretary, has been in the US this week and appealed to Trump through an interview on Fox & Friends, telling Trump he is wrong.

Why would Trump site Israeli intelligence when his own intelligence agencies said months ago that Iran was in compliance with the agreement? Like his predecessor President George W. Bush did by creating the Office of Special Plans in the Pentagon, Trump is using bad data, misinformation, disinformation and/or lies to put America in the precarious position of backing Israel in a war with Iran for no rational reason. One of the links between Bush’s war in Iraq and Trump’s aggressiveness towards Iran is John Bolton. Bolton served as United States Ambassador to the United Nations from August 2005 to December 2006 under the Bush Administration and is currently Trump’s National Security Advisor.

Bolton was one of the signatories to the infamous PNAC letter to President Bill Clinton wherein Clinton was asked to overthrow Saddam Hussein. “The policy of “containment” of Saddam Hussein has been steadily eroding over the past several months…Our ability to ensure that Saddam Hussein is not producing weapons of mass destruction, therefore, has substantially diminished…The only acceptable strategy is one that eliminates the possibility that Iraq will be able to use or threaten to use weapons of mass destruction. In the near term, this means a willingness to undertake military action as diplomacy is clearly failing. In the long term, it means removing Saddam Hussein and his regime from power. That now needs to become the aim of American foreign policy.”

President Clinton did not fall for the 1998 lie. President George W. Bush fell for the 2003 lie, helped perpetuate it and invaded Iraq.

In December of 2017 President Trump made the unilateral decision to defy over 20 years of precedence from previous administrations, “…to move the U.S. embassy to Jerusalem or to recognize Jerusalem as Israel’s capital city.” Contradicting well established rationale and policy Trump “…determined that it is time to officially recognize Jerusalem as the capital of Israel. While previous presidents have made this a major campaign promise, they failed to deliver. Today, I am delivering.”

Campaign promises are made by candidates to express a desire to take the country in a particular direction. Once elected, presidents are usually swayed by daily security briefings, consultation with policy experts and meetings with allies. The Washington Post reports, even the simplest version of the presidential brief has proven too challenging. Now, Trump gets his briefing verbally. Trump said, “I’ve judged this course of action to be in the best interests of the United States of America and the pursuit of peace between Israel and the Palestinians.” First, how can he make such judgements when he does not understand the intricacies of the relationships and issues. Second, rarely do “campaign promises” unilaterally become US foreign policy.

Dr. Bandy Lee, assistant professor in forensic psychiatry at the Yale School of Medicine believes, “The special counsel’s indictments started a crisis — a mental health crisis in a president who is not able to cope well with ordinary stresses such as basic criticism or unflattering news.” In her edited volume “The Dangerous Case of Donald Trump: 27 Psychiatrists and Mental Health Experts Assess a President” it was stated, “Trump is an “extreme present hedonist.” He may also be a sociopath, a malignant narcissist, borderline, on the bipolar spectrum, a hypomanic, suffering from delusional disorder, or cognitively impaired.”

Donald Trump has been unable to make the shift from campaign to governance and unilateral decision maker to leader of the free world. His ill-informed rants and decisions are moving this country closer and closer to the brink of international isolation and disaster. The fact that Trump nominated Mike Pompeo as secretary of state and appointed John Bolton as national security adviser — both Iran hawks — does not bode well for peace and stability. I think the US is being positioned to back Israel’s play and attack Iran.

We’ve seen this movie before, it was called Iraq and its sequel is called Libya.