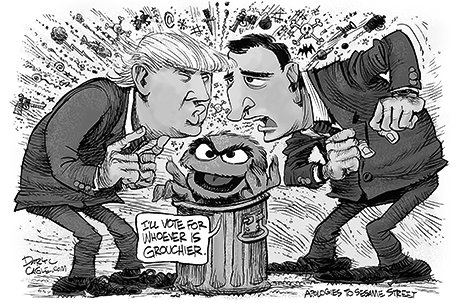 Vice President Joe Biden was not auditioning for a stint on Saturday Night Live or appealing to divine providence when he quipped to a packed crowd of Democrats recently that the Republicans may have given the Democrats a “gift from the Lord” in the presidential race. The heavenly gift Biden referred to comes in the form of a Donald Trump or Sen. Ted Cruz presidential candidacy. Biden and many other Democrats practically salivate at the thought of either one of them getting the GOP presidential nomination.

The conventional wisdom is that this will deliver the White House back to the Democrats in a hand basket. The election walk-over for presumed Democratic nominee Hillary Clinton is the nightmare that has haunted the GOP party leaders from the moment that Trump and Cruz declared their candidacies. Both men are the most polarizing presidential ticket candidates since Sarah Palin turned the GOP White House bid into a running Comedy Central riff.

This election go-round, it’s far worse than when Palin was on the ticket in 2008, and later made some soundings about a 2012 presidential bid. Trump and Cruz have stayed at or near the top of the polls from the start of their campaigns. They both have big, angry and aroused constituencies, be it Cruz’s evangelicals or Trump’s fed up, white blue collar workers. They are mostly white, older voters, and they would likely show up at the polls on Election Day for one of the two.

In the past, it was fairly easy for GOP leaders to rid themselves of a party nuisance such as Palin. After all, they controlled the money, media spin and party apparatus. They banked that they could maneuver and massage the primaries and convention to ensure that the noise and mischief the outsiders could make would die before the primary season began. That won’t happen this time. Trump has got, and will continue to get, non-stop, headline coverage from a slavish, fawning media, he will maintain his mass poll support from the disaffected millions of voters; and, he will likely get a proportional share of delegates in a number of GOP primaries, win or not. Cruz has a mountainous campaign war chest, the solid support of white protestant conservative evangelicals, and the prestige of holding a national office.

They also have gotten a huge lift from the cast of GOP presidential hopeful competitors. With the exception of the momentary fascination with Dr. Ben Carson, the other contenders have wallowed in single digits in the polls, have gotten little to no traction in their campaigns and have been swallowed in the media rush to Trump and Cruz. The bigger problem for GOP leaders are the voter demographics. The average GOP voter is white, older and conservative. Legions of these voters are polarized and put-out with their party.

This didn’t just happen overnight. The disaffection has been building for almost a decade. They lambasted Presidential contenders John McCain in 2008 and Mitt Romney in 2012 for being too deeply tainted by the Washington bureaucratic, compromising and deal-making establishment. A huge swatch of the GOP stayed away from the polls in droves during both campaigns. Their sleep-in on Election Day was a big reason for McCain and Romney’s defeats. In the nearly 8- year tenure of President Barack Obama, the fury of much of the GOP base to a traditional play by the established Washington rules presidential candidate has risen to a fever pitch. The prospect of a Hilary Clinton White House, which is tantamount to a third Obama term, further insures that Trump rallies and appearances will take on the appearance of a crusade.

GOP leaders, in the event of a Trump or Cruz break-away in the caucuses and primaries, can do one of three things: They can continue try to rally support behind a Jeb Bush or Marco Rubio, the party establishment’s preferred choices. They can pretend to remain neutral, which just gives Cruz and Trump even more room to roam or they can jump on the bandwagon of either one of them. If either one is the eventual party nominee, GOP leaders, donors and bundlers, and the national and state committees will have no choice but to support them full throttle. Anything less would insure a runaway win for Hillary Clinton, the possible loss of the Senate to the Democrats, risk losing some GOP controlled statehouses to the Democrats, and even worse, split the party. A Trump or Cruz presidential nomination snub would risk incurring the anger of millions of GOP grassroots voters, a catastrophe that they  will do all they can to ensure doesn’t happen.

Trump and Cruz, then, are the GOP’s textbook Catch-22. One of them figures as a real possibility for the presidential nomination. For GOP leaders to not support them almost guarantees a flaming Election Day defeat. But to support them could mean the same. That’s the GOP’s much deserved worst nightmare.

Earl Ofari Hutchinson is an author and political analyst. His latest book is Trump and the GOP: Race Baiting to the White House (Amazon Kindle) He is a frequent MSNBC contributor. He is an associate editor of New America Media. He is a weekly co-host of the Al Sharpton Show on Radio One. He is the host of the weekly Hutchinson Report on KPFK 90.7 FM Los Angeles and the Pacifica Network

Why the GOP can’t get rid of its clowns