Toward a multiracial youth coalition 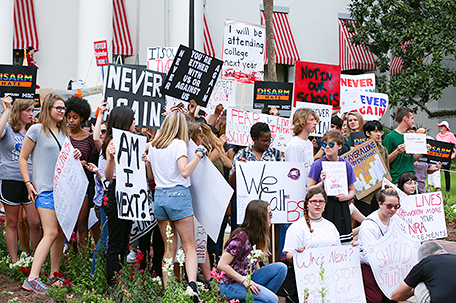 One cannot help but be riveted by the outstanding response from the young survivors of the carnage at Marjory Stoneman Douglas High School in Parkland, Florida, and their absolute audacity in confronting both Florida legislators and the President with their frustration at the absence of common sense gun control.

All of the students who have spoken up have been impressive, so much so that CNN commentator Jack Kingston (former Georgia Republican congressman) and other of his ilk have asserted that these students are “crisis actors” who are being “manipulated” by “liberals” and “Democrats.” All you have to do is listen to one of these young people, hear the tears trailing at the end of their voices, and hear their frustrated voices rising into yelling, to know they have not been coached. The emotion is too raw, the feelings are too real, and one young woman told a CNN reporter that she “resented” the notion of manipulation. These young people are between 14 and 18, middle and upper-middle-class young people who have had the benefit of a civics education. They plan to March on Washington on March 14th, and have already attracted support from Oprah Winfrey, George and Amal Clooney, and others.

The Parkland young people have been savvy enough to note that their school was not shot up by an immigrant but by a homegrown terrorist. They have implicitly rejected the rhetoric that comes from 1600 Pennsylvania Avenue about dangerous immigrants. Imagine that they actively reached out to some of the dreamers and encouraged them to be part of the youth movement for common sense gun laws. Some dreamers will be vulnerable to being deported as early as March 6. If these youth can combine their movements with their demands, they could develop a very powerful movement.

Imagine further, that the young people who have been exposed to gun violence on the streets of cities like Chicago and Washington, DC joined the Parkland movement, and that a group of diverse young people came together to push politicians to do better on legislation that affects their generation. This includes gun laws, but may also include health care, and access to education. Even though the Parkland young’uns come from middle-class backgrounds, they are surely aware of the narrowing of opportunities for the middle class. If these mostly white young people could join with youth of color, they could mirror the dream that Dr. Martin Luther King, Jr. had when he talked about multiracial coalitions.

Perhaps I’m being overly optimistic about the possibility of a multiracial youth coalition. We have seen several young white men pick up automatic weapons and kill multiple people. Dylan Roof was just 21 when he killed nine African-Americans at Emanuel African Methodist Episcopal Church. Nikolas Cruz, the killer In Parkland, is 19. Even as the Parkland students galvanize, there are forces that are also galvanizing young people. These are the neo-Nazis, the White supremacists, and the downright racists who appeal to young White men who somehow feel that others have more opportunity than they do. These are the folks who listen to the siren call of 45’s rhetoric and eagerly embrace his divisiveness.

Still, if we believe, as Dr. King once said, “the arc of the moral universe is long, but it bends toward justice”, then we must be optimistic about positive developments in the political arena. The young people who have risen up are a positive development. If they are able to join with young people of color to push politicians in the right direction, we will all be better off!