To Be Equal: Blackface is a flaunting of White privilege 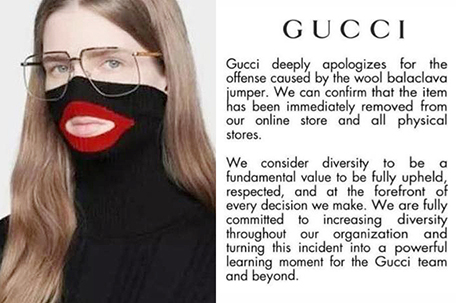 “Blackface isn’t just another costume. It’s a mask of privilege, the kind of unchallenged power that comes through denying the experience of others.”

As a Black student in overwhelmingly White schools in Louisiana, I faced my share of racial insults and slights. But one of the more memorable incidents was not even a deliberate slight directed at me. The offenders probably didn’t even think of me. But when a group of my classmates contemptuously affected exaggerated accents mocking Black people as part of a school production, I walked out.

The governor and attorney general of Virginia are under fire for having worn blackface to parties in the 1980s, and the senate majority leader there edited a college yearbook that featured blackface photos and racial slurs. NBC News anchor Megyn Kelly lost her job after defending blackface Halloween costumes. Fashion design house Gucci was forced to apologize for marketing a balaclava sweater that resembles blackface.

Not by accident, the rise of the minstrel show coincided with the rise of the abolitionist movement. The portrayals were intended to dehumanize Black people, to sabotage any nascent empathy for those held in bondage. The stock character Zip Coon made a mockery of free Blacks, with all his attempts at dignity undermined by his foolish tastes and lack of education. The “coon” part of his name, which remains an all-too-common racist slur, referred to his preference for raccoon meat over more sophisticated fare.

Other stock characters included the overly-sexualized “Buck” and “Jezebel,” which simultaneously fueled a fear of Black men seducing White women and justified the rape of women slaves. The sympathetic minstrel characters, the “good ones,” were portrayed as content with their place in society.

For White people in much of the country, the demeaning stereotypes of the minstrel shows were their only exposure to Black life. The minstrel shows functioned to solidify the concept of White supremacy at a time when support was waning for the inhumane institution of slavery. The stereotypes – lazy, hypersexual, violent, incapable of social grace – persist to this day and are at the root of the inherent bias that infects our institutions.

So prevalent were these characters, so powerful was their role in establishing racial hierarchy, that the name of one character, Jim Crow, became shorthand for the entire system of racist suppression and terrorism that followed the collapse of Reconstruction.

When White people darken their skin or otherwise distort their facial features to resemble Black people, it’s not an “homage” as many have tried to claim. It’s an act that is almost always performed for laughs. It is mockery. Blackface is a White person exclaiming with derisive glee, “Look at me, pretending to be Black! Isn’t that hilarious?”

Those who defend blackface aren’t simply ignoring history; they’re ignoring the very structure of contemporary American society. Whiteness in 21st century America conveys status and privilege as much as it ever did. The status and privilege of whiteness are at the heart of blackface. The cruel humor depends upon the chasm between privilege and disadvantage. It is a kind of flaunting of White privilege. It’s why you almost never see the reverse; Black people manage to get through costume parties dressed as White characters without lightening their skin or disguising their facial features. A Black child with an S on his chest and a red cape is pretty clearly Superman, and almost no one would think his costume was incomplete without White makeup.

Even though we are once again having a national dialogue about this hurtful practice, there are those who will continue to defend it, who refuse to understand why it is offensive, who insist that is their own intentions that matter, and not the effect on others. But it is the very definition of White privilege to decide for oneself what is and isn’t – or what should and shouldn’t be – offensive to Black people. When you step on someone’s foot, even accidentally, you step off and apologize. You don’t stomp down harder and say, “But I didn’t do it on purpose, and I can’t feel it so it must not hurt.”

The fact that blackface gives offense, whether intended or not, is reason enough.

Before multiculturalism, blackface rampant in US pop culture