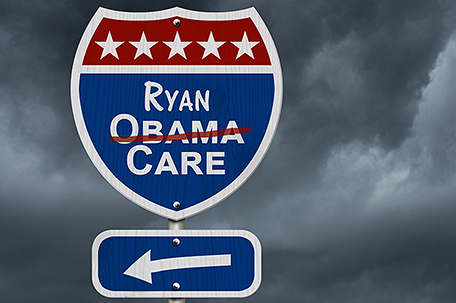 After months of “repeal and replace” rhetoric, Congress has finally passed a pitiful little bill designed to eliminate the Affordable Care Act.

To watch Republicans gather in the Rose Garden to “celebrate” the narrow passage of their paltry bill, you would have thought that 45 [President Donald Trump]was about to sign ground-breaking legislation.  Instead, changes to the Affordable Care Act must be ironed out between the House of Representatives and the Senate.  It is unlikely that the Senate will be as quick to succumb to 45’s pressure in the same way that the House did.

Only 20 Republicans had the decency to oppose the flawed legislation.  Meanwhile, groups like the American Medical Association and the AARP have said the legislation is unacceptable.  It illustrates the odious nature of the 45th Presidency, which is a triumph of predatory capitalism and exploitation.  Poor people lose with this legislation, and so do people with pre-existing medical conditions.  Older people, too, will lose, but people who earn more than $200,000 a year (or couples who earn more than $250,000) see their taxes go down by about 3.8 percent.   The 45th President says this plan will lower premiums and deductibles, and that those who have pre-existing conditions will not be hurt.  The legislation says otherwise.

Democrats were silly, but not wrong, to serenade Republicans with “hey, hey, hey goodbye.”  House Minority Leader Nancy Pelosi (D-CA) was colorful, but not incorrect, in telling the Republicans who voted for the legislation will “glow in the dark”.  As New York Democrat Louise Slaughter said, some committed  “political suicide” by voting for the rancid bill.

Republicans were so desperate for a victory that they didn’t even wait for the Congressional Budget Office to analyze the bill and talk about how much money the bill will cost, and how many people will lose their health insurance under the legislation.  Instead, they crowded on the White House lawn as if they had something to celebrate.  Their gathering was akin to someone giving a party because they took, but did not yet pass, a final exam.  But 45 and his cronies were clearly so desperate for any kind of victory that they reveled in their preliminary celebration.

It is preliminary to wail, moan, and wring hands this early in the game.  After all, the Senate has to weigh in, and is already writing its own legislation.  Some say they will take House concerns into consideration, but others insist that they will keep their own counsel.  Similarly, it is preliminary for 45 and his henchmen to celebrate something that is only the first step in an arduous process that may take months to complete.  What is worth noting, though, is how pitiful this White House is, how eager they are to celebrate narrow victories, and how desperate they are to scrap President Barack Obama’s important health insurance legacy.

Those smiling people in the Rose Garden were, at best, delusional.  They were celebrating the “repeal” of the Affordable Care Act, and its replacement with a paltry, mean-spirited plan to make health insurance more difficult to attain.  It would have been useful if, instead, Republicans had joined Democrats to fix those parts of the Affordable Care Act that can be improved.  Unfortunately, that would mean giving credit to the President whose vision and foresight provided health insurance to millions of Americans.

Thank goodness for a process that sometimes seems cumbersome.  Now, the cumbersome process will save us from Republican anti-Obama venom.  These folks were in such a hurry to “repeal and replace” the Affordable Care Act that they ignored cost, preparation, and process.  They were so eager for a celebration that they weren’t even clear about what they were celebrating.  They are setting themselves up for 2018, and their small, petty victory may be the origins of their defeat, if only Democrats have the discipline and the energy to keep the pressure up.

Haywood: Defeat of SB 76 is Victory for Pennsylvania Taxpayers