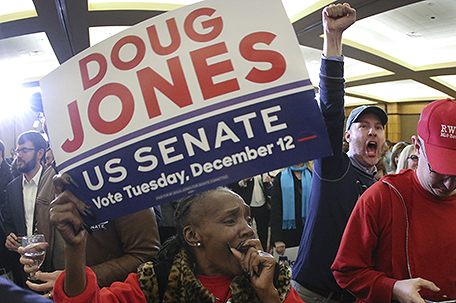 Senator -elect Doug Jones (D-Ala.) did not have to win his battle against accused sexual molester and Republican candidate Roy Moore in the epic battle in Alabama on December 12.

He won because young people, some White women (most of them voted for Moore), and an amazing effort from Alabama’s African-Americans put him over the top.  Some White folks crossed party lines for the first time, voting for Jones because Moore repulsed them.

In cyberspace, people are thanking Black women for their support of Doug Jones, on Twitter, and Facebook, and Instagram.  A friend told me that a woman she had not seen in a decade called her to thank Black women for saving the Senate from the likes of Roy Moore.  Everyone likes to be thanked, but Black women deserve more than thanks.  We deserve the “hook up,” the connection, organizational, institutional and financial support for our efforts.

Black women’s organizations in Alabama should get immediate contributions from the Democratic Party.  Indeed, some of the sisters who led the effort to get the vote out, like Congresswoman Terri Sewell (D – Ala.), need to be consulted on how to effectively support Black women in Alabama.  The Democratic Party ought to cultivate Black women leaders in Alabama so that they are poised to run for other offices. And since Doug Jones has a short term, and will be up for reelection in 2020, Black women need to be deputized to begin working on his reelection campaign immediately.

White women are often in the unique position to hook Black women up, in politics and in the workplace, but they don’t offer the hook up as often as they should because it is challenging for them to step outside their comfort zone and embrace diversity.  But when folk step out of their comfort zone, look at the results!  Thanks to Black women, among others, Doug Jones is the unlikely winner of this Senate contest.

I’m cognizant of the fact that Black women weren’t the sole reason for the Jones victory.  It is especially exciting to see young people reject Roy Moore.  Millennials are far less partisan than their elders are.  You can’t say they cross party lines because many of them have no party affiliation.  But like Black women, young people in Alabama thronged to the polls to elect Jones.  Their participation makes a strong case for generational inclusion when political strategies are being developed.

In any case, it is heartening to see Black women being thanked for doing what we always do – the work.  I don’t just want thanks, I also want the hookup.  Those white folks who are thanking Black women might also send a contribution to Higher Heights ( http://www.higherheightsforamerica.org), a Black women’s PAC named after Dr. Dorothy Irene Height. Or, folks can send contributions to the Black Women’s Roundtable (https://ncbcp.org/programs/bwr/policy), which is part of the National Coalition for Black Civic Participation.   It is great to express gratitude, but it is even better to put your money where your mouth is.

Black women have always had to assert our place in the mainstream, and we have too often been ignored by our natural allies.  And we still come through in a crunch.  Those who are thanking us ought also to support us.  They need to hook Black women up!