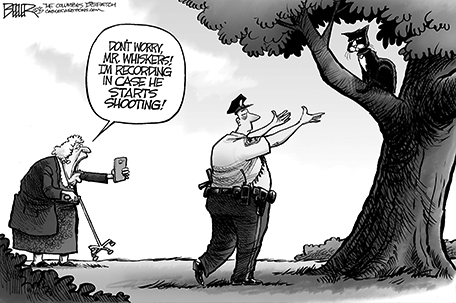 The day after Tulsa County District Attorney Steve Kunzweiler announced first degree manslaughter charges would be filed against Tulsa officer Betty Shelby for gunning down distressed motorist Terence Crutcher, the Los Angeles Urban Policy Roundtable and other civil rights organizations held a press conference. They announced that they were calling on the Los Angeles Police Department, the L.A. County Sheriff’s Dept., and other police agencies, locally and nationally, to immediately establish a “Breaking the Blue Code of Silence” hotline. This would give cops who police legally, professional and constitutionally to blow the whistle on cops who blatantly break the law. This is a common sense measure for several infuriating reasons.

In South Carolina, we watched as a Black officer aided and abetted moving evidence in the killing of Walter Scott. In St. Louis we watched as a cop was caught planting a gun on a suspect he shot. In Charlotte, we watched as an officer may have moved or even planted a weapon in the slaying of Keith Scott. In Tulsa, we watched as Shelby gunned down Crutcher and then claimed she felt threated with no visible evidence of any actual threat to her. We watched because videos allowed millions to glimpse law enforcement either blatantly breaking the law or covering up law breaking.

But in some ways, the more galling thing that we watched is that officers within these departments, and more than a few administrators, also watched and more importantly, knew that their fellow officers were blatantly breaking the law. Yet, not one stepped forward before, during, or after the videos exposed the lies and the cover to blow the whistle on the lie and cover-up. This is so routine that it would have been a shock if one officer had actually broken ranks and screamed foul.

Here’s how deep, prevalent, and terrifying the “blue code of silence” is in police culture. The National Institute of Ethics in a study commissioned by the International Association of Police Chiefs surveyed hundreds of cops in 21 states. They found that nearly 80 percent of cops said that a code of silence exists more than half said it didn’t bother them almost half admitted that the code was strongest when excessive force was used, and half also admitted they had witnessed misconduct by another officer, but kept their mouths shut about it. Why? Because in many cases they were told to keep quiet by other officers, and in even more cases by department higher-ups. And if they didn’t, they were scared stiff that they would be ostracized that the officer who committed the misconduct would be disciplined or fired; or worse, they’d be fired or at the very least, would be “blackballed,” or that their bosses would simply blow their complaint off. A significant number of them said they wanted to speak out about the abusive acts of fellow officers, but were pressured by “uninvolved officers” to keep quiet.

The reasons they clammed up can’t be cavalierly sloughed off. Many readers and movie goers have long memories and remember the true life account of what happened to NYPD officer Frank Serpico who blew the whistle on police corruption, became an instant pariah and eventually was set up for the kill. But officers don’t have to envision themselves getting the extreme Serpico treatment for finger pointing abusive officers to know that their stock would plunge beneath the floor among other officers if they were tagged a “stoolie”.

However, there’s not, or never has been, any need for them to quake at that prospect. Courts have sided with officers in the few times that they have broken ranks and called out other officers to higher-ups for misconduct from beatings to the shooting of suspects or civilians. In one case, an appeals court in California went further and reminded police officers and officials in a ruling on the issue that it’s the legal and professional duty of an officer to report misconduct by another officer. It’s a protected Constitutional right, and that any form of retaliation against the officer for speaking out is illegal.

The problem is that few police departments pound this point home to rank and file officers, or for that matter, to their superiors. Put bluntly, telling them and continuing to tell recruits at the academy, officers in orientation and training sessions, and in their performance evaluations that the department has zero tolerance toward police misconduct. That if an officer witnesses it they are duty-bound to report it. If they don’t they are just as guilty of law breaking as the cop that breaks the law. The blue code of silence makes it possible for bad cops and bad administrators to get away with, and keep getting away with abusive acts from Charlotte to Tulsa and countless other places. It’s the single biggest thing that jades minorities, and increasingly much of the public toward cops, and reinforces the notion that all cops routinely lie, cheap and cover up abuses. When cops break the blue code of silence and administrators back them up that will be a giant step toward changing that notion.

Earl Ofari Hutchinson is an author and political analyst. He is the author of How “President” Trump will Govern, (Amazon Kindle) He is an associate editor of New America Media. He is a weekly co-host of the Al Sharpton Show on Radio One. He is the host of the weekly Hutchinson Report on KPFK 90.7 FM Los Angeles and the Pacifica Network.