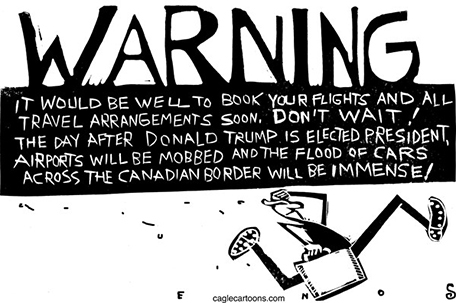 Donald Trump’s boast that he will “easily” beat Hillary Clinton in November was scoffed at, mocked, and laughed away as being “delusional”

Let’s forget for a moment the part about “easily” beating Clinton, because that probably won’t happen.

But thinking the unthinkable, which is that Trump could beat Clinton is another matter.

The brutal reality is that there is actually a path for a Trump November win. It starts with the numbers. November will be first and foremost a numbers game, namely who and how many get to the polls, and who and how many don’t. And it also requires shattering some prevailing myths.

The Pennsylvania primary in April was an ominous warning about the numbers. It is one of the six or seven states that will decide the White House and an absolute must win state for Clinton. Yet, Trump almost matched her vote total in the state, the other five Republicans on the ballot, most prominently Kasich and Cruz, almost matched the total that Sanders got. It was a close run-up between the Democrats and Republicans in the state. This despite the fact that Sanders sparked enthusiasm and energy among his followers and gave Democrats a reason to go to the polls.

Pennsylvania was no aberration. In 10 other primary states more Republicans than Democrats have trooped to the polls since January.

Much is made that there aren’t enough less educated, blue-collar white men in the electorate to push Trump over the top, but that’s misleading. Trump has actually gotten a lot of votes from middle-class white both male and female, college educated, business, and professionals.

There’s more still to the potential Trump vote total. Elections are almost always won by candidates with a solid and impassioned core of bloc voters. In Trump’s case, white males, older voters, middle-income, college educated voters vote consistently and faithfully. And they vote in a far greater percentage than Hispanics and blacks, and especially young voters. The big exception was 2008. Barack Obama’s run to the White House turned the campaign into a crusade to make racial history. That powered the massive sea change in traditional voting patterns. In 2012, it didn’t hold up. Obama won the popular vote by just slightly more than 5 million votes over Romney. In 2014, it totally fell apart with the GOP’s steady voting base again back at the polls and the party used it to seize the Senate.

There’s no guarantee that the enthusiasm, passion, energy, and sense of making history that was there for Obama will be there for Clinton. The red flags on this are the negatives. Trump has them in spades, but so does Clinton with two huge troubling differences. Trump was loathed by many from the start, but the Trump haters weren’t going to vote for him anyway. Clinton’s disliked numbers have been going steadily up meaning the more people that hear and see hear her the more people dislike her. The seeming plus is that Democrats are more solid behind Clinton than Republicans are behind Trump. But there’s a caveat here. This almost certainly will change after the GOP convention with Trump as the nominee. The GOP establishment and rank and file will fall in line. The fear and loathing of a Hillary Clinton White House literally trumps any loathing of Trump. Also, the party and Trump will roll out a slightly more refined, measured, and polished Trump that’s designed to allay the wild man Trump fears, and calm the anxieties of conservative leaning independents whose votes will loom large in November.

The comforting notion that Trump is so repugnant and repulsive, and that since so many routinely mock and ridicule him as an ego maniacal babbling idiot, that in a head-to-head contest the smooth, articulate, well-versed consummate policy wonk Clinton will make mincemeat of him in the debates and on the campaign trail. This is dangerous. The proof of that is from the moment that Trump declared his candidacy in June, pundits, much of the media, and the GOP and Democrats laughed him off as cheap, sideshow entertainment who would wilt in the GOP debates, collapse under intense media scrutiny, and fade away after the drumbeat attacks on him from the top tier GOP candidates. Well, months later they’re all nearly gone. Not only is Trump still standing, he has gotten even more wildly popular in countless voting circles.

In the showdown with Clinton, he’ll have a king’s ransom war chest, a still fawning media that regards him as their ratings cash cow, and a smart, well-honed, well-oiled GOP that smartly stole a big page from the Democrat’s 2008 and 2012 playbook and built a ground game that includes massive phone banks, the creative use of social media, will compile and work the mountains of voter lists, will put hundreds of boots on the ground to work GOP friendly precincts to get out the vote, and will strategically spend on the campaign in the crucial swing states.

Earl Ofari Hutchinson is an author and political analyst. His latest book is From Sanders to Trump: A Guide to the 2016 Presidential Primary Battles (Amazon Kindle) He is an associate editor of New America Media. He is a weekly co-host of the Al Sharpton Show on Radio One. He is the host of the weekly Hutchinson Report Saturdays 9:00 AM on KPFK 90.7 FM Los Angeles and the Pacifica Network