The world watched America as Lady Justice got it right! 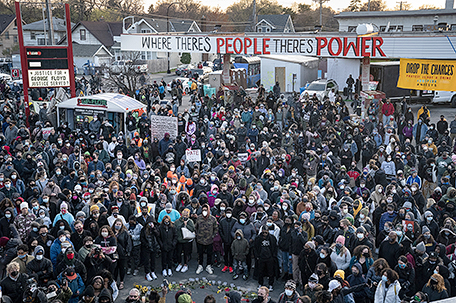 Lady Justice finally took off her blindfold to see what African Americans have been seeing for decades.

America’s iceberg of deceit, secrecy, discrimination, injustice and basic human rights was exposed not only in the court of public opinion but in the criminal court that has shown what “Justice For All” looks like.

The events that preceded the death of George Perry Floyd are forcing the nation to be transparent about the life of African Americans. The change started with the ouster of former President Donald Trump, the pandemic, the insurrection at the Capitol, protests surrounding the deaths of George Floyd, Breonna Taylor and Ahmaud Arbery, and the trial of Derek Chauvin.

Last week, America and the world watched and waited with intense curiosity and concern about the verdict that was about to be read in a Minnesota courtroom by Judge Peter Cahill which  was handed down to him by the 12-member jury made up of six white jurors, four Black jurors and two bi-racial jurors.

“I feel it was justified, ain’t no way in the world, he could got off on that,”  Philadelphia resident Arthur Bridges said. “And I just think that it’s about time. But I want to see what’s gonna happen with the young man that got killed. And then, the 16-year-old girl got killed. On the day of the decision. I just think Jimmy, that it’s time for things like this to come to a head. Because, like the prosecutor said, If you believe your eyes, seeing is believing. He shouldn’t have did what he did.”

Within this verdict was a sigh of relief, joy, excitement, sadness, and sympathy for the Floyd family and others across this country who endured injustices of many lynchings and murders that were not provided the justice realized in this case.

“I was born and raised in Savannah, Georgia in the South and I know all about this.  I know all about the situation and the prejudices down there — and come up here and it’s the same prejudices,” another resident, Sarah Brunson, said. “I have to see how much time he gets first. But, he should get life.”

Were it not for 17-year-old Darnella Frazier and her 9-year-old niece, witnessing the murder in front of the Cup Foods store on May 25, there would have never been an opportunity to see what justice looked like.  Frazier’s cellphone video of the incident went viral and exposed Derek Chauvin as he squeezed the life out of George Floyd.

Now that the guilty verdict is in and Chauvin knows his fate, hopefully the actions of other officers will be scrutinized as they “Protect and Serve” Black and brown people throughout the country.

In West Philadelphia, when protests started last year, there was a lot of vandalism, looting, violence and destruction of businesses — with some businesses never recovering. The scenes from that time did not repeat itself as the outcome of the trial was satisfactory to many in Philadelphia and around the country.

As I went around Philadelphia to get more reactions on the verdict,, many shared some interesting views and opinions.

“People are happy about this cop getting convicted,” said Chris from South Philly. “But what about all these Black people killing Black people. How about the Black on Black crime? How about these kids out here getting killed for nothing? I really don’t have any feelings [about]the conviction of this cop, because he is just one person. Let’s get justice for the other people, too.”

“I’m not American,” explained Tammy Hine. “I grew up in South Africa. I’m glad that justice was served and I hope this is the start of more accountability. … I hope that this is the beginning of fixing that system, because there was a problem that needed to be solved and this should not be the end, by no means, to anything.”

“I have a feeling that the white guards are gonna be protective of him,” Mina Smith of Center City said.  “And I feel like he’s gonna have a much easier time than he deserves. Because, when he was booked and brought into jail the first time, the guards who were in charge of that event — they changed the guards. They said that the Black guards should not take care of him. I think he’s gonna be protected and I don’t think that’s right.”

Hopefully the process of accountability in policing will continue , not only through the public and cellphone videos, but by  fellow officers who follow appropriate training guidelines and common sense when apprehending suspects of color and who do their jobs without deaths occurring.

Floyd verdict gives hope, if only fleeting, to Black America