The voices of the unheard: The generation that will breathe 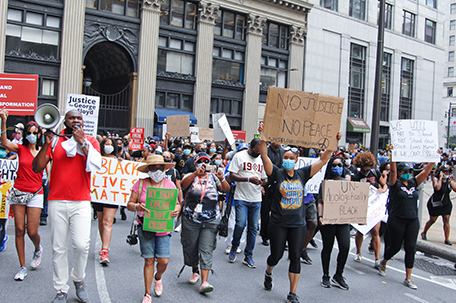 You’ve seen them on the news and your social media is filled with hashtags; #GeorgeFloyd #NoJusticeNoPeace #BlackLivesMatter, and it’s safe to say this generation would rather go voiceless than be unheard.

The youth have dominated the narrative nationwide with their voices and they refuse to be ignored.  After the tragic death of George Floyd surfaced on the internet due to police brutality, social media went into an uproar and the people decided, “We’ve officially had enough!”

People holding up billboard signs began to spread like wildfire through the streets, boldly stating, “My Life Matters” and our youth, from young children, to teenagers, to young adults, have time traveled back to the days of Dr. Martin Luther King’s Civil Rights Movement, when they marched and chanted in unison demanding their voices to be heard, unapologetically.

The pain, anger and confusion is seemingly projected through their voices in the midst of shouting out words of freedom, but most importantly, when the young ones of this generation decide to march, chant, yell and cry, it symbolizes something bigger than a protest.

After all the countless unjust deaths resulting in the abuse of authority over the people, a  number of young ones decided to give the system a wakeup call; (can you smell that?) It’s the smell of hope. The youth are very much aware of the injustice across the country, as well as the systemic racism against young Black boys and girls.

Our time is now. Some people may say 2020 is “canceled,” however, the energy shift towards equality in order to put a stop to systemic racism and to allow the voices of those we lost to be heard because of a broken system has marked this year as history.

The people are speaking up courageously through hardships with the economy, a pandemic, and the clear disadvantages of the system we are living in. As the protestors gathered together as a people and shouted the names of our brothers and sisters, we filled the air with the last words George Floyd uttered before he died an unjustifiable death. Their footprints are marked on the streets of our city. There is no block too long that the people will not march down!

If you are reading this, ask yourself, “how can change start with you?” A protest organizer/ leader recently stated, “I think we need to educate the youth on what is going on, but first ask them how they feel, because it’s essential to understand their raw emotions first before we educate them. Once we have that positive dialogue, then we begin to bridge the gap where there may be misunderstandings.”

From the beginning of the suppression of our ancestors, to the continuous oppression from the system, we as a people have been in an unbearable knee-kneeling, chokehold for years. George Floyd is the last breath the system will take away without a fight. In fact, we will breathe, we will be heard, and we will not give up.

Bio– Kayla Taylor is 22-years old, born and raised in Philadelphia. She is an English major, studying secondary education and is currently enrolled in Community College of Philadelphia, planning to transfer next year.

Over the years, Taylor dabbled in modeling and singing, but expressing herself through writing saved her life. She says that being a writer is about finding the “beauty in the beast” and unlocking a world of creative expression where “my passion flourishes.”

A Millennial Voice: White voices in conjunction with the BLM movement – A conversation with Marla Newsom