The Un-United States of America 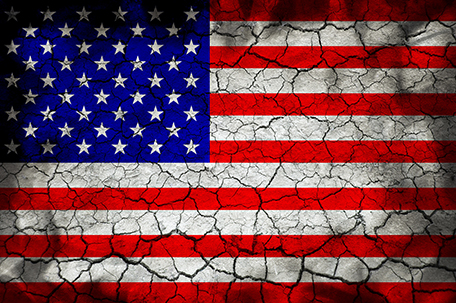 Shortly after the Declaration of Independence was signed on July 4, 1776 the Second Continental Congress struggled to develop a document that would provide the structure for the first government of the United States.  On November 15, 1777 the representatives of the 13 original colonies adopted the Articles of Confederation.  It provided structure for a loose association of independent states, enabling them to cooperate on specific matters while maintaining individual state sovereignty.

The Articles of Confederation failed for a number of reasons.  Among those reasons were, the inability of the national government to tax, regulate interstate and foreign commerce, and provide for central leadership.

One major event that signaled the failings of the Articles was Shay’s Rebellion, an armed uprising that took place in Massachusetts in 1786 and 1787. Daniel Shay, a Revolutionary War veteran and Massachusetts farmer was being forced into foreclosure on his farm as the state raised taxes and interest rates to cover its war debt.  Shay and fellow protesters shut down county courts to stop the judicial hearings for tax and debt collection. The government’s inability to deal with the issues leading up to the rebellion signaled a break down in order and signaled that a new structure was needed.  The country was becoming ungovernable.

Today, 226 years later, Americans face yet another threatened shutdown of the government but this time there’s a difference.  Shay’s Rebellion was an uprising led by a small band of citizens against the established order, the government.  Today, the anticipated shutdown is being led by a small band of elected officials who are more focused on their narrow political ideology than operating in the best interest of the American people. They are also willing to misrepresent the facts and lie to the American people to make their case. Congress’s unwillingness to work with the Executive Branch and its inability to pass legislation is a clear indication that once again, the country is becoming ungovernable.

Conservative Republicans in the House of Representatives have passed a bill linking the continued funding of the government to the unrelated defunding of the Affordable Care Act (ACA).  Sen. Ted Cruz (R-TX) is the poster boy for the conservative opposition to the ACA.  He has called the ACA a “glitch-riddled healthcare takeover that is killing jobs, wages, and health-care benefits all across the nation.”  It’s not a takeover of health-care; it’s a change to health insurance which provides greater access to care for the previously uninsured.  Why are Republicans opposed to expanding healthcare to more Americans and willing to shut down the government in order to prevent it?

According to fact checking by USA Today, Cruz’s diatribe on the Senate floor was filled with outright lies. For example, Cruz falsely claimed that the spouses of 15,000 UPS employees will be “left without health insurance” and forced into “an exchange with no employer subsidy.” UPS is dropping coverage for spouses only if they can get insurance with their own employer. Cruz also cited an outdated quote from Mark Zandi, chief economist of Moody’s Analytics, to back up his claim that Obamacare is slowing job growth. Zandi told us the slowdown in job growth at small businesses is “no longer the case.”

House speaker Boehner has stated, “”The American people don’t want a government shutdown and they don’t want Obamacare…The House has listened to the American people…Now is the time for the US Senate to listen to them as well.”  The problem with Boehner’s statement is that it is just not supported by the facts. For example, CNBC released a poll earlier this week showing Americans oppose defunding the new health care by a 44 percent to 38 percent margin and strongly opposed defunding 59 percent to 19 percent, if it means shutting down the government. Not to mention the fact that health care reform was a significant plank in President Barack Obama’s platform in both the 2008 and 2012 campaigns. He won convincingly both times.

Senator McCain addressed the previous point by saying, “the people spoke” and still reelected President Barack Obama in 2012. Lawmakers shouldn’t “give up our efforts to repair Obamacare” McCain said, but said it wasn’t worth shutting down the government. “We fought as hard as we could in a fair and honest manner and we lost…”

These are the same people who two weeks ago under the direction of the House majority leader, Eric Cantor (R-VA), pushed through a bill that slashes $40 billion from the food stamp program over the next 10 years and limits the time recipients can get benefits to three months. Cutting food stamps at a time when according to Bread for the World 14.5 percent of American households struggle to put food on the table? More than one in four American children are at risk of hunger? Senate Democrats have pledged to not pass this bill and President Obama has promised to veto the bill if it comes across his desk.

Cantor’s bill would also require adults between 18 and 50 without minor children to find a job or to enroll in a work-training program in order to receive benefits.  This, at a time when according to Census Bureau statistics there are 11.3 million unemployed persons and the unemployment rate at 7.3 percent, changed little in August?  Lest we forget, Cantor and his cronies are also leading the charge to cut funding for job training programs.

The Ted Cruzs and Eric Cantors of the world are the modern day Daniel Shay.  The difference is Shay led a populist movement of citizen’s who’s way of life was being threatened by the government.  Cruz, Cantor, and their band of Tea Party political terrorists are holding Americans hostage and using the American government against the American people; making the United States of America, un-united and ungovernable.

The Most Useless Man In America

New survey takes a snapshot of the view from Black America