The significance of the 1619 Project 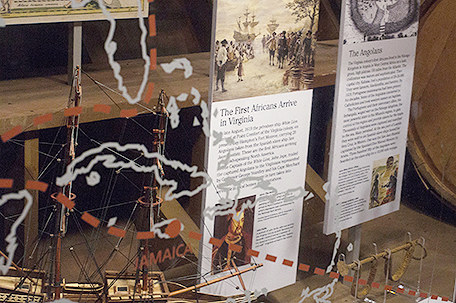 ABOVE PHOTO: The Hampton History Museum has created an exhibit, “The 1619 Arrival,” that tells the stories of the first Africans who landed at Point Comfort in 1619. (L. Todd Spencer/The Virginian-Pilot via AP)

Recently, the New York Times unveiled “The 1619 Project,” a journalistic series in the Sunday magazine that seeks to tell the “unvarnished truth” about slavery and its impact on America’s history.In 1619, just 12 years after the founding of the first permanent English settlement in the Americas, the Jamestown colonists bought the first slaves, 20 to 30 enslaved Africans,from English pirates.

The Declaration of Independence, penned by Thomas Jefferson, a slave owner, issued America’s founding creed: “We hold these truths to be self-evident that all men are created equal, … endowed by their Creator with certain unalienable Rights, … among these are Life, Liberty and the pursuit of Happiness.”

As Nikole Hannah-Jones writes in her stunning introduction in the New York Times Magazine, at 43, she is part of the first generation of Black Americans in the history of this country to be born into a society in which blacks had equal rights of citizenship. Blacks suffered under slavery for 250 years, and brutal racial apartheid for a century more.We have been legally free for just 50.

Americans prefer not to face this reality. Our history classes address it gingerly, if at all. Even as President Donald Trump and cynical politicians stoke racial divisions for political profit, we too often look away from it. Trump has recently decided to make four young, newly elected congresswomen of color a central target of his already launched campaign for re-election, scorning them as un-American, suggesting that if they don’t like America, they should go back to where they came from. This though all four are American citizens, and three were born right here.

Trump is poisonously invoking the old lie of slavery and segregation that people of color are somehow not real Americans. Yet, as Roger Wilkins wrote in his book “Jefferson’s Pillow” and Hannah-Jones in her introduction, it is the freedom struggles of Black Americans that propelled the cause of equal rights for everyone.The Constitution excluded women, Native Americans and Black people, and did not provide the right to vote to most Americans.

It is the laws born out of the Civil Rights Movement that extended the right to vote to everyone and banned discrimination; not simply on race, but on gender, nationality, religion and disability. Without the idealistic and patriotic struggle of Black Americans, as Hannah-Jones notes, “our democracy today would most likely look very different — it might not be a democracy at all.”

Recently, Ken Cuccinelli, Trump’s acting director of  Citizenship and Immigration Services, sparked outrage when he brazenly reworded Emma Lazarus’ famous poem found at the foot of the Statute of Liberty that reads “give us your tired, your poor, your huddled masses yearning to breathe free…” What Cuccinelli probably had no clue about is that the Statute of Liberty was a gift to the people of the United States from the people of France and was dedicated in 1886 to celebrate the national abolition of slavery.

It is the figure of Libertas, the Roman goddess of freedom. A broken shackle and chain lie at her feet as she strides forward, commemorating the abolition of slavery in 1865, an abolition that turned out to be the first step in America becoming in fact, as well as in word, the land of the free. In telling the “unvarnished truth” of slavery, we will face the horrors of our past, as well as the triumph of our progress. It is a telling that is long overdue.

Rev. Jesse Jackson Sr. is president/CEO of the Rainbow-PUSH Coalition.