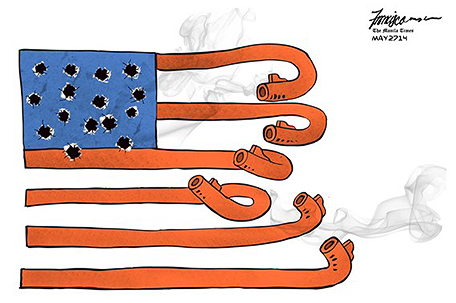 FBI official David Bowdich issued this statement immediately after the mass killing in San Bernardino by alleged shooters Syed Rizwan Farook and Tashfeen Malik, “It would be irresponsible and premature for me to call this terrorism. The FBI defines terrorism very specifically, and that is the big question for us: What is the motivation for this?” Two days later FBI Director James Comey finally did use the word “terrorism” in announcing that the FBI would investigate the mass killings as a possible terrorist act “inspired by foreign terrorist organizations.”

But this still begged the question of calling the massacre exactly what it was, namely domestic terrorism. There is no need to spend the countless hours trying to decipher a motive for the killing. Fourteen people  were slain and scores others injured. The killing ground was not chosen randomly. The shooters had stockpiled a cache of weapons and exploding devices which strongly indicated more mayhem and more murder was planned. Despite the Fox News fear machine and the boundless thirst for others in the media to endlessly remind us they were Muslims and to snatch at any and every fragment about their lives to make the ISIS, Al Qaeda, Saudi connection to terrorism, the brutal reality is that Farook was born, raised, studied and worked in America. Their heinous act was not foreign import terrorism. It was terrorism  made-in-America.

But the absolute refusal by the FBI again to brand the massacre “domestic terrorism” fits in with the by now well-established pattern of officials and virtually all GOP leaders to avoid using that term at all costs. The only exception is when those who commit mayhem and murder are Muslim. And according to numerous studies, they are the rare exception since the overwhelming majority of those who commit targeted mayhem in this country are non-Muslim, usually white and male, and have a checkered history of crime, mental instability, and are deeply influenced by right-wing rants.

How the two alleged San Bernardino shooters were characterized is a prime example. Some news outlets had no compunction about immediately slapping the label “terrorists” on the pair. However, the label was applied on the basis of a very shaky and tenuous alleged tie to Saudi Arabia via a trip and a Facebook entry allegedly praising ISIS. The word “domestic” was not placed in front of terrorist with them.

The refusal to call their alleged act “domestic terrorism” strikes to the heart of how many Americans have been reflexively conditioned to regard terrorism. It starts, of course, with who is routinely branded as terrorists, and what is officially called terrorism. In the first instance, it’s exclusively related to the Middle East and the perpetrators are Muslim. The FBI’s working definition of what constitutes terrorism is: “Terrorism is an act done or threatened to in order to try to influence a public body or the citizenry, so it’s more of a political act.”

Even when South Carolina church shooter Dylann Roof plainly wrote that he had an animus toward blacks and acted out that insane animus by gunning down multiple black churchgoers, he still did not rate being branded a “domestic terrorist.” The same held true for alleged Colorado Springs Planned Parenthood clinic shooter Robert Lewis Dear, who despite plainly targeting the clinic and giving the reason why, was still not branded a terrorist. Instead, the ritual was to officially whitewash, and air brush, the mass carnage with condolences and prayers for the victims and their families.

The consequence of refusing to stray one jot from the textbook definition of who is a terrorist and what is terrorism on U.S. soil has consequences beyond disarming, confusing and in effect putting even more Americans in harm’s way from home-grown terrorists. It also is overloaded with a heavy mix of political calculation and cynical manipulation. Both were quickly evident in the ritual brand of the massacre as “radical Islamic terrorism” by GOP presidential candidate Ted Cruz at a gathering of the Republican Jewish Coalition. This was more than just playing to the audience’s fears. It was also yet another chance to use the killings to lash President Barack Obama for refusing to knee-jerk play into those fears that Cruz and others stoke about Muslims and brand any violent act here and abroad as “Muslim terrorism.” This also provides a springboard to pound Obama again for not beating the war drums for an all-out attack on any and every real and imagined foe in the Middle East.

Whether it’s shooting up a Planned Parenthood clinic, a center for the developmentally disabled, or any other domestic target, there’s simply no political incentive to call the shooters “domestic terrorists.” This crashes hard against the official narrative that made-in- America terrorists and terrorism constitute minimal or no real threat to life and property here. This danger supposedly only comes from a foreign group, Muslim of course. The San Bernardino massacre and the almost ritual frequency of these killings in the US may soon force government agencies, much of the media and the broad swatch of the public to confront the bitter and dangerous truth that made-in-America is a horrific reality; and should be called that.

Earl Ofari Hutchinson is an author and political analyst. His latest book is Trump and the GOP: Race Baiting to the White House (Amazon Kindle). He is a frequent MSNBC contributor. He is an associate editor of New America Media. He is a weekly co-host of the Al Sharpton Show on Radio One. He is the host of the weekly Hutchinson Report on KPFK 90.7 FM Los Angeles and the Pacifica Network

Anti-terrorism success may not help Obama in 2012