The Resilient Rebellion of Stacey Abrams 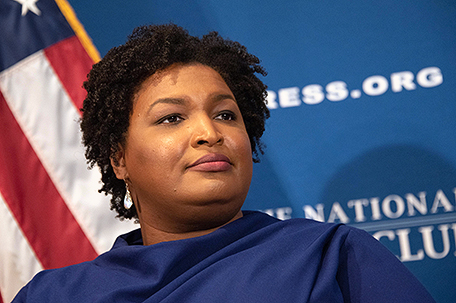 There is an inherent risk when it comes to praising a politician. To be a successful one, you may have to exchange your principles for the necessity of getting something done. In the current climate of hyper-partisan politics in Washington and in statehouses across the country, compromising with the other side is frequently viewed as surrendering to the enemy.

Last week, white people rioted at the command of their recently defeated cult leader and white people are going to have to fix what they broke. Black people are not responsible for Donald Trump’s insurrection plot against America. Black people have already done their part to save democracy.

The result is America is a house divided against itself.  Which makes the ascent of one Stacey Abrams all the more remarkable.

Abrams is not the “Magic Negro” of the moment as chosen by the mainstream media. While she deserves all the accolades she is receiving with the stunning turn of events in Georgia, she has become the most powerful person in American politics.

I’m just going to say this — and be mad at me if you want, but I have to speak the truth. The truth is if Stacey Abrams looked like Kamala Harris, she’d be the 46th president of the United States. That’s the way it would be if this was a world that went beyond appearances to accomplishments. Then women who look like Stacey Abrams — who don’t pass the eye test for standards of beauty which have never taken Black women into consideration — would rise above sexism and racism to power in politics, regardless.

However, instead of wringing our collective hands over what they did wrong, let’s celebrate what we did right. It’s no coincidence what happened in Washington came immediately after the results of the runoff election in Georgia where two Democrats challengers knocked off two Republicans incumbents for their seats in the U.S. Senate.

By doing so this gave control of the Senate, House of Representatives and the presidency to Joe Biden and the Democrats, giving them the power to force through Biden’s agenda and a chance to work without Mitch McConnell obstructing everything.

No one person can take all the credit from flipping the Georgia electoral map from ruby red to a bright shade of purple. Black Voters Matters, Nse Ufot, who leads the New Georgia Project, and other organizations have been doing the work of finding, informing and registering Black, Latino, white and Asian Pacific voters for over a decade. Warnock and Ossoff’s victory were powered by years of labor that paid off in a stunning demonstration of the awesome power of grassroots activism.

In 2018, Abrams, the former minority leader of the Georgia statehouse, ran for governor in Georgia and lost. That’s the nice version of what happened. The not-so-nice version is that she ran against Brian Kemp, the secretary of state for the great state of Georgia, who was in the novel position of being the guy who supervised his own election when he ran for governor against Abrams.

He could have stepped down and allowed someone else to run the office as the overseer of the state’s election, but Kemp didn’t do that. He ran for one office while using the powers of his current one to his own advantage, mostly by making it harder for the very voters he was sworn to protect to vote for his opponent. Disenfranchising the Black vote is the game plan mediocre-to-terrible Republicans follow to win power and hold it in the South.

This year Abrams tore up that playbook.

In some ways, Abrams shares much in common with Martin Luther King, Jr. in receiving an inordinate share of the spotlight, but that is not to say she didn’t put in the work to flip the state out of the exclusive control of the Republican Party to a time share with the Democrats.

Ossoff will have a full six years before facing the voters again, but Warnock will have to run again for the seat in 2022, which could lead to a rematch with Loeffler or Perdue challenging him instead.

He’s likely to be joined by Abrams, whom it is anticipated will decline any offers to serve in the Biden Administration in favor of a rematch with Kemp. For all her successes, Abrams still wants the prize she was cheated out of four years ago.

To sum up Abrams in one word is tough, but let’s go with resilient. She defined herself before her enemies could.

As she was quoted from the Washington Monthly in 2018, “My being a Black woman is not a deficit. It is a strength. Because I could not be where I am had I not overcome so many other barriers. Which means you know I’m relentless, you know I’m persistent, and you know I’m smart.” Abrams said.

By harnessing, focusing and unleashing the power of the Black vote, Biden, Warnock, and Ossoff won.  They won because people like Abrams had lost. She didn’t go away, sit down or shut up. She was advised to take that loss, be quiet and wait her turn because that’s what “good girls” are supposed to do in politics. Abrams didn’t do any of those things and now she — along with the other activists of the Peachtree State — have shown the Democrats a way forward and it’s a path she’s likely to take to win the governor’s office, the prize that she desires most.

Don’t bet against Abrams getting it.