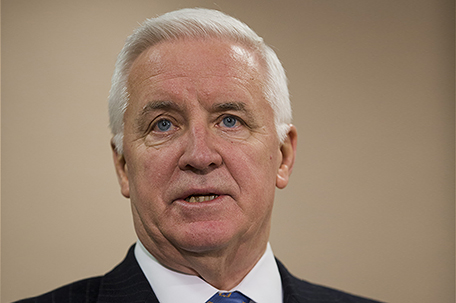 It may surprise some to hear that not one but two gubernatorial campaigns are under way in the Keystone state. One of them, of course, is the red hot Democratic race now featuring four candidates, any one of which could win the primary, and all of whom would be formidable nominees in the fall. The other race for governor, flying well under the radar screen, is Republican incumbent Tom Corbett’s primary “race.”

The Democratic race is getting most of the attention, but the Republican race may be more crucial. Democrats need only to select a nominee to run against Corbett; Republican’s already have a nominee – now they need to make him a contender.

Elections involving incumbents are always a referendum on how the incumbent has done the past four years. Corbett at this point isn’t doing well in that referendum. A large majority of voters don’t believe he deserves to be re-elected. That, more than anything, is something he must reverse and soon.

This recognition that Corbett is in deep trouble with the electorate is no dark secret. In fact, he is widely considered to be the most endangered gubernatorial incumbent in the country. Not so well understood, however, is that Corbett is in as nearly much trouble with his own party. Thirty percent of Republicans don’t believe he deserves re-election. Corbett has to win back his own “base” if he is to have any chance to win in November.

In order to do that, his first task should be to refurbish his image within his own party.  Now that voters are beginning to pay attention, the Corbett campaign is trying to do precisely that.

Primarily, they are doing so with media advertising. Corbett now has been on the air since February, running commercials reminding voters of his “promises kept.”

The ads clearly have a major objective – to remind Republicans why they voted for him in 2010. If he can’t do that nothing else matters much. Corbett cannot win a second term without solid support from Republican voters. Right now, he doesn’t have it.

Corbett’s problems, of course, don’t stop with Republican voters. Winning back Republicans doesn’t guarantee him reelection; it just guarantees the fall campaign won’t be a one sided event. To make the general election a contest, Corbett has more work to do – a lot more work.

Even Corbett’s harshest critics acknowledge that he has faced daunting challenges during his first term. He inherited Pennsylvania’s unsolved pension problem, one that poses the state’s biggest fiscal threat since the 1970’s. In addition, he has struggled against a weak economy and high unemployment through much of his term.  And now he joins a long line of Republican governors that tried and failed to achieve liquor privatization.

This question looms critical for Corbett: How will voters evaluate his leadership given his modest list of legislative accomplishments. And leadership looms as a fundamental element in gubernatorial re-elections.

Adding to his woes is Corbett’s polling performance with women voters. Corbett generally does not do well with women in match-ups with likely Democratic opponents. This is a critical deficit that he must address, if he is to win re-election.

One possible bright spot is the still unsettled Democratic primary. It certainly would help if Democrats oblige Corbett by nominating someone he can beat. Bereft of a good crystal ball, naming that candidate isn’t possible. But clearly the Corbett campaign prefers to run against Allyson Schwartz, perceiving that her long past and many votes as a state and federal lawmaker making her the most vulnerable of the leading Democratic gubernatorial candidates.

At the end of the day, however, the vital question remains: can Corbett recover from his steep slide? Far down in the polls, losing decisively to most of his Democratic challengers, contending with an economy that has not produced large state surpluses, faced with an electorate that overwhelmingly thinks the state is moving in the wrong direction – can Corbett convince voters to take a second look?

Pennsylvania’s other race for governor is all about getting the  answer to that question.

Politically Uncorrected is published twice monthly, and previous columns can be viewed at http://politics.fandm.edu.