The N-word: It’s no less ugly today than then 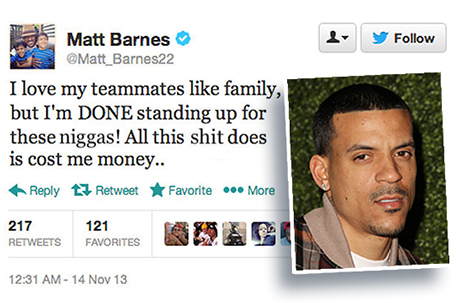 ABOVE PHOTO: Matt Barnes (insert) with tweet in background.

The high school students enter the room and begin the process of de-electronic devicing themselves as they look over the handouts on their desks.

I’m at the head of the class to give my second of three presentations on the civil rights movement. Earlier in the week, I had successfully badgered the teacher into referring to me as a visiting scholar. Always wanted to be called that.

An African-American boy gives another black boy a fake forearm shiver and calls him the N-word. Several black boys and girls giggle. I cringe at the sound of the most vile word in the English language, but say nothing. A white visiting scholar, I assume, is expected to stay on task.

To understand events of the 1960s, I enumerate a list of what the lay of the land was like when that decade began. Thirty-cents-a-gallon gasoline. Three channels on TV. A week’s worth of cafeteria lunches for $1.25. No gizmos brought to school fancier than a yo-yo.

Outside the window of the Indianapolis-area high school, two uniformed officers stand next to patrol cars. They wear bulletproof vests. Didn’t have that back then, either.

I tell the boys and girls that the southwest corner of Virginia where I grew up didn’t desegregate schools until the fall of 1965, my junior year. Before then, the 10 or so black kids from my home town were bused 15 miles to Douglass High School across the street from the Morocco Hotel and its “For Colored Guests” sign in flickering neon.

In my home town, people of color lived on A Street by the railroad tracks or on Baltimore Street adjacent to the black cemetery.

There was no African-American professional class. No doctors. No lawyers. No insurance agents.

There was no black middle class. No factory foremen. No service reps. No delivery truck drivers.

Most of the black men were either janitors or garbage collectors. If their wives and sisters had jobs, they were probably domestics.

On my first visit to the high school, I told the kids about “Jubilee in the Rear View Mirror,” my two-act play set in 1964 at the height of the civil rights movement in a fictional town in Mississippi.

To reflect the segregation of the play’s period, the audience was divided into separate White and Colored sections. Patrons were assigned to one or the other randomly, not by race.

I had interviewed around 50 men and women who went South during the 1960s to desegregate schools and businesses and to sign up black voters. (I was told that a common question asked by voting registrars to folks of color was, “How many bubbles are in a bar of soap?”) What I learned became background for the play.

The students watched portions of two DVDs we created for the play’s educational pre-show — oral histories of African-Americans in Evansville, Ind., and Greenwood, Miss., who talk about living under segregation until the movement took root.

For a long time, this was all the back story I shared with classes of kids regarding my interest in the civil rights movement. Then one day, a young lady raised her hand. “There’s more to it, isn’t there?” she said. “Yes,” I replied. “So, give already,” she said. “I’m too ashamed,” I replied.

A totally inadequate response. I recognized. So now I tell it all when I visit a school.

James was one of the transfers from Douglass and a good student. We sat next to each other in French class. I liked the guy.

The Key Club was the most prestigious club for males at my high school. A miracle happened the year before, and shy little me was voted in. James wanted to join and kept bugging me to get an application. I could see bad things coming and didn’t want any part. He eventually got the paperwork from the faculty adviser.

We Key Clubbers met on a Sunday afternoon at the vice president’s house. Each member received a list of the pledge class. One of the football players printed the N-word next to James’ space on every ballot and underlined it in Magic Marker.

Somebody noticed that James had used my name as a recommendation. Somebody else said he had seen us walking down the hall together on the way to French class. There was total silence as every eye zeroed in on me. Red-faced and blubbering, I denied we were pals.

The next step was the speeches. An applicant’s name was announced, and one or more club members spoke on his behalf. James’ turn came. Nobody stood up. I wanted to say James was a great guy, but lacked the courage.

Several members looked over my shoulder while I filled out my ballot. I knew that I would be called “N-word lover” for the rest of my time at school if I wrote “Yes.” I also knew that what little popularity I had mustered would evaporate. So I didn’t vote for my friend. Nobody else did either.

James called that night to find out if he had been accepted. I said, “Hey, pal, I did all I could, but you came up a couple votes short. The pledge class was really strong this year. Sorry.”

James bought the lie and thanked me for being such a booster.

I could never look him in the eyes after that. Wherever he was, I tried to be somewhere else. By graduation, we had little more than a hailing frequency. We didn’t even sign each other’s yearbooks.

During my first visit to the Indianapolis high school, the teacher had encouraged her students to write down questions. I answer some of them at our next get-together.

Did you make your peace with James?

I reply that I’ve tried to get hold of him without success. The last I heard, he was in California. Maybe he moved. Maybe he died. We’re no longer young men, I tell the class.

How do you feel about the N-word?

I was glad to get this one. Now the visiting scholar can be on task.

The slur has been in the news lately. Its use is at the core of the bullying imbroglio in the Miami Dolphins’ locker room between Richie Incognito, a white National Football League player, and Jonathan Martin, a black teammate.

“The word I used is a word that’s used on the court, is used in the locker room, is used by most of my friends and family,” Barnes explained, adding that “It’s like saying ‘Bro.’ That’s just how we address people now.”

I tell the students the N-word was used by white racists as far back as the 19th century to reinforce the stereotype that persons of color are lazy and stupid.

The new movie 12 Years A Slave contains scene after scene of brutish slavemasters unleashing the N-word on cowering African-American plantation workers who have no choice but to take it.

One girl shrugs shoulders and says her mother greets her every morning with “How’s my little N-word doing today?”

Another black girl says she has changed her mind about the N-word. “It’s wrong to speak it. I’m not going to do that any more.”

I commend her for having the gumption to articulate a point of view that some of her friends might not share.

Later in the day, I see the same girl in the hall. In loud fashion, she drops the N-word. The boy next to her laughs.

Mathews is the retired metro columnist for the Evansville Courier & Press. His email address is [email protected]