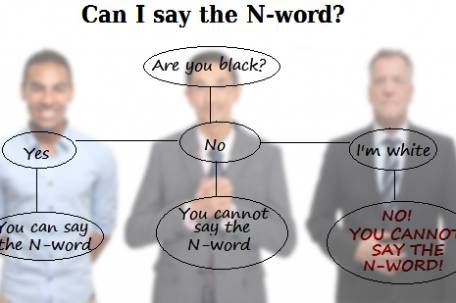 There’s probably not a single word in the English language that dredges up profound imagery of one kind or another as ‘nigger’. A most derogatory term—and at the same time, recently, a word that has been adopted as a term of both animus and endearment among African American youth.

There are centuries of pain and injustice attached to the word. It is a term that sits at the heart of anti-Black distortions and Black decrepitude; however, Hip-hop music brought the term back into some strange kind of vogue. These young musicians adopted the term—co-opted it, actually—as a term of both kinship and derision.

The history of the word ‘nigger’’ has most often been traced to the Latin word ‘niger’, meaning ‘Black’. This word became the noun ‘negro’ (Black person) in English, and the color ‘black’ in Spanish and Portuguese. Early English substitutes / derivatives were ‘negar’, ‘neegar’, ‘neger’ and ‘niggor’. It is likely that ‘nigger’’ is a phonetic spelling of the white Southern mispronunciation of ‘negro’.

Historically, Black intellectuals have rued the use of the word. “Back during the turn of the (20th) century, a Black man didn’t have a name, “ said comedian and activist Dick Gregory in an interview for HBO’s ,’Joe Louis: American Hero Betrayed’. “He was just ‘nigger’’. ‘Hey you, “nigger.”

During the halcyon days of hip-hop, ‘nigger’’ contained an interchangeable, ecumenical connotation, used to describe both friend and foe alike. NWA (Niggaz With Attitude), the West Coast hip-hop aggregation of the 1980s, used the term as part of their name. Synonymous with the ‘gangster rap’ phenomenon, NWA parlayed the brand into multi-million dollar sales, creating a paradigm that defined the genre for several decades—and influencing scores of cheap imitators.

Chuck- D, the socially-conscious leader of the controversial hip-hop aggregate, Public Enemy, had a stinging criticism of his fellows who casually bandy the pejorative about in their lyrics in an interview with ‘TMZ’. His was a response to former hip-hop mogul Suge Knight’s stated preference of the word to describe Black people as opposed to the term African American.

“The term African American may not be the most fitting to describe Black people,” said Chuck D, “but allowing the masses to call Black people the ‘N’ word would not only set the race back years of struggle, but would also cripple those who do not yet fully understand the word, its usage and it’s legacy.

“Being called ‘Black’ in America is part of the struggle to keep us moving and breathing over bloody water. Being a ‘nigger’ is like drowning in bloody water, dragging down those who have not yet learned to swim.”

Writer, social critic and educator Michael Eric Dyson, opined that it’s okay for Black people—particularly rappers—to use the word—but never whites. Said Dyson, “I would suggest to all white people that there’s an iron-clad law that will help you at all points. Here’s when you can say the word: NEVER!!!”

However, CNN journalist Roland Martin disagreed with Dyson’s contention that the ‘N’ word is ‘okay’ for Blacks but not anyone else. “The ‘N’ word is never acceptable—not for me, not for thee, not for anyone.”

This writer found while researching this article that many young Black people in the 21st century, have disavowed the use of the term.

“Unless I’m quoting someone—or referencing a (hip-hop) song, I don’t use the word,” says Adam Hill, 28, an African American classical violist from Atlanta. “My parents, both highly educated people, prohibited the word from being used in our house. We were prohibited from using it even in jest or in reference.”

Mycah Simms, a computer analyst from Nashville was even more vehemently opposed to the use of the ‘N’ word.

“In my opinion,” said Simms, “young Black people are more educated of the word’s connotations and mindful of derogatory terms they use against each other. We want to be more aware of how we treat each other as a people. We know that the views of other cultures toward us is often informed by the manner in which we treat each other.

“We’re also aware of the significance of having a black president.”

Simms says there is a sexual divide among young Black people on how the culture is protected. “Mostly, it’s Black women who have initiated these kinds of changes in the culture because we are primarily responsible for raising the next generation of Black citizens. We’re more accutely aware of the effects on our children. We want to alter the cycle…”

Is Queen Latifah using character on ‘Single Ladies’ to finally come out?