The meaning of Kente; more than just a fashion statement 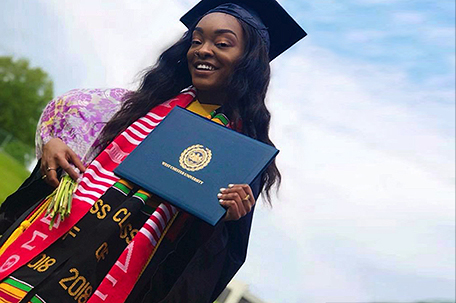 As I walked through the gymnasium, accompanied by the sounds of African drums playing the soundtrack of my story and a host of other graduates, I sensed that I was a part of something bigger than myself. Something that I, as a Black student graduating from a PWI (Predominantly White Institution), could be proud of. My rite of passage. My significance. My pride.

Culturally specific graduation ceremonies aren’t newfangled, but as of late, they’ve grown both in popularity and criticism. The number of minority students graduating from PWI’s has risen as well. Because of this, predominantly White colleges/institutions across the country have taken to hosting pre-commencement ceremonies, often referred to as Kente, to highlight minority students’ and their accomplishments. While no diplomas are handed out at said service, the bronzed necks of hundreds of students are decked with beautiful Kente cloth stoles in recognition of the achievements that our ancestors could only dream of.

Kente cloth holds cultural significance beyond the celebration of minority graduates. The sacred cloth was claimed to have been founded in the 1700s by two brothers who were introduced to the art of weaving by Anansi, a sneaky spider. The two carried their newfound knowledge back to the Bonwire village, where the cloth was reserved for special occasions and royalty. And though the use of Kente has grown and changed exponentially over time, the royal aspect rooted in its origin has not faded.

A painful history filled with ugly realities has yielded some of the most beautiful anecdotes of survival, struggle, unrestricted love, and glory this world will ever see. Like our stories, our identities remain complex in the most astounding fashion, hence ceremonies like Kente are essential. In that moment, our village is once again restored. The unapologetic Blackness ornamented with the grins and subtle relief of proud relatives, the warmth of love that lies within every church toned “amen”, and the history you can see in the very cracks of the Black hands that wave at you through the crowd, feels like the beaming of a million rays on your skin. In that space, blood relation is insignificant. We are one.

There’s a sense of pride that can only be felt when Black people come together for something as joyous as graduation. The feeling is reminiscent of listening to the choir sing at a Baptist church, but amplified.

While I hope that most minorities can understand the power that lies within culturally specific ceremonies like Kente, I can surmise that none of our counterparts can fully comprehend the weight. But, how could they? They’ve never had to cope with the harsh realities of being the pip(s) on a dice cube.

There are a number of non-kin folk who support ceremonies like Kente, but there’s also a horde of those who do not agree, citing that culturally specific events are racist, regressive, separatist, and discriminatory. Through my search I came across Charlie Kirk, a writer, who amongst other things, attested that Martin Luther King would be appalled by the events, which made me think about how often Dr. King is used as a scapegoat in racial discrepancies on either front. However, I wish I could ask Kirk if he always felt represented, welcomed, and supported on his college campus. Many of them do not understand and cannot think the way we do. They do not understand a sense of community the way we have to, because they’re not grouped together at every turn. I wish I could tell him to read “Why Are All the Black Kids Sitting Together in the Cafeteria” by Dr. Beverly Tatum or “Tears We Cannot Stop: A Sermon to White America” by Michael Eric Dyson. Maybe then he’d understand why his comments are rooted in bigotry and not concern.

The counter argument “they’d be mad if we had an all-White graduation” is something worth bringing up, but not worth dissecting in this article. I charge you to think about the implications of that sentiment.

Too often, being pro-yourself is seen as being anti the “other,” but that viewpoint is flawed. Many of our counterparts genuinely believe that we are no longer oppressed, which further confirms why still we need culturally specific graduation ceremonies. Part of me wishes they could understand the yearning, but the bulk of me enjoys being with like-bodies.

We have much to celebrate. There’s nothing like feeling a sense of community on a campus that did little to make you feel there was one. To be seen by your people, there’s nothing like it. Walking across that stage and receiving my Kente stole meant more to me than receiving my diploma. Kente: My rite of passage. My significance. My pride — to the Class of 2019, Ashe’.