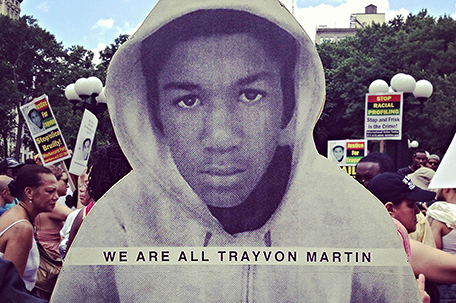 Editor’s note:  The SUN is running this article in the memory of Trayvon Martin, who would have been 24 last week. Never Forgotten.

Celebrating his 24th birthday this week, and preparing to receive a masters degree this spring.

That’s what Trayvon Martin should be doing today.

The masters degree would likely be from Florida Memorial University, where he received a bachelors of science in aeronautical science — with a concentration in flight — from their Department of Aviation and Safety.

Because Trayvon Martin was murdered in 2012.

In August 1619, a ship named ‘White Lion’ arrived in Virginia with Africans — from Angola — and African slavery in America began. And though slavery was ended in 1864, the oppression of Blacks in America has not.

Lynching, murder, and police brutality visited upon young Black men is nothing new. Thousands have been executed by whites for little more than being Black. So many that few caused more than a local uproar.

But every now and then, a murder of precious young men catches the attention of the whole nation.

In 1955, it was the horrific murder of Emmett Till, a 14-year old boy who was accused of whistling at a White woman in Mississippi — and beaten, mutilated, then shot before being thrown into a river.

A photo of the murdered teenager, lying in his casket, so disfigured that he looked like a monster was published in a Black newspaper, and then published and shown around the world.

His murderers were known, taken to trial, and acquitted. They later admitted their guilt in a paid magazine article.

Emmett Till’s murder was a catalyst for The Civil Rights Movement.

On February 26, Trayvon Martin was murdered by George Zimmerman, an insurance underwriter and head of the neighborhood watch for a gated community.

15-year old Trayvon had just bought a can of soda, and a bag of candy and was on his cell phone with a friend while walking back to his father’s apartment when Zimmerman first saw him in the gated community.

Zimmerman called the police and said there was a suspicious man — i.e. a Black man wearing a hoodie — and was told by the police to not confront the suspect.

Zimmerman hung up and confronted the suspect.

Shot and killed him in fact.

Though police came and talked with him almost immediately after the homicide, Zimmerman was not arrested until six weeks later.

So he was arrested, sent to trial, and was acquitted.

Trayvon Martin’s murder was the catalyst for the Black Lives Matter Movement.

But none of the Movements seem to have stopped the killing of our youth.

Trayvon Martin would have turned 24 this week. He should be celebrating, then getting back to studying for his finals so he could get his Master’s Degree in May.

No Movement will bring you back, but please know that you will not be forgotten.