The lies that bind: When the ME TOO movement becomes a tool of destruction 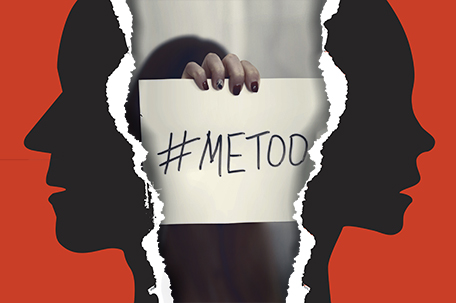 In October of 2017, after many rumblings that something was amiss because numerous women were speaking up in solidarity at public events about being sexually harassed, abused and then dismissed, American film producer Harvey Weinstein became the first well-known male, who was accused and recused from his powerful position.

He began fighting back until he realized that his decades long gig of abuse was finally up.

From the consistent accounts of women who allegedly suffered at his hands, that takedown was well deserved.

Since then, more than 201 powerful men, who were once considered untouchable, fell like dominoes, with women replacing almost half of those positions formerly held by those men—according to an in-depth New York Times article entitled “#MeToo Brought Down 201 Powerful Men. Nearly Half of Their Replacements Are Women.” published on Oct. 29, 2018.)

The Me Too movement, founded by Tarana Burke —who is a powerful advocate for women’s voices in the United States and the world — finally gave women and men who have suffered at the hands of their bosses, lovers and acquaintances the courage and platform needed to exhale and speak of that which was before unspeakable.

One slight problem – another, much quieter movement is afoot that we must also recognize.

There are some women who are using “Me Too” as a tool to willfully accuse men, while knowingly causing irreparable harm.

They cry foul and destroy the lives of innocent men, without consequence. Not even an apology to said accused, who are now victims themselves.
But who is paying attention to them?

Once someone is accused of any kind of immoral sexual act, the mere tone of an accusation can destroy their reputation totally, even when they are later found innocent.

Where is the “due process”? Due process by law, generally requires fairness in government proceedings. A person is entitled to be heard at a hearing when they have life, liberty or property at stake. Due process requirements apply to both criminal and civil law.

Society tends to see all women as fair maidens who would do no wrong, but, there are a few documented cases of women lying and becoming the abusers, receiving what amounts to little more than a pat on the wrist, for being “mistaken,” while they plot to destroy someone they may be angry with, as an example.

Should those women not be held accountable for willfully destroying people too?

Writing this piece was not easy — we tend as human beings to see either/or, when it should be both.

We should hold the men who are abusers accountable AND the women who purposely lie accountable, too.

Whispering behind closed doors helps no one.

Here are two powerful examples of how an accusation of sexual assault can change the course of many lives forever. The story of football player Shawn Oakman, a defensive end for the Baylor Bears.

You may have read his story that two weeks before the NFL draft in 2016, where he would have most assuredly been chosen as a player for the National Football League, Oakman was accused of sexually assaulting a young lady. When interviewed by the police, Oakman countered that he had had consensual intercourse with the young woman.

There begat the 3-year journey that altered the course of this young man’s life forever.

He went from seeing on the horizon a solid way to finally watch his hard work come to fruition and the ability to help his family find an easier way of life, to literally fighting for HIS life.

Being that Oakman was 6’9, a solid 280lbs, the media pounced on the comparisons between him and his accuser, which led to his being unfairly tried by public perception.

As Oakman continued to maintain his innocence and had to watch in silence as he was excoriated, he also lost any deal he may have had with the NFL, as they now would not touch him as the accused.

What Oakman thought would be over in a couple of weeks, believing that surely the evidence would support him, became three excruciating years of darkness no one wants to ever imagine.

He held tightly to his faith, and refused to accept the forced plea agreement of three years’ probation, as he knew, that to many, it would be an admission of guilt.

Oakman was threatened with two decades in prison if he refused to take the plea agreement and run the risk of losing his trial. He stood his ground and maintained his innocence.

In recent weeks, Oakman had his trial, and March 1, 2019, was unanimously found NOT guilty. Like he maintained, the evidence did not point to him raping that young lady.

This awful accusation not only impacted Oakman’s life, but his beloved football coach at Baylor University was fired and the president stepped down.

Think of all the lives affected in that one lie. And we may never know what motivated her to tell it.

After his trial ended, Oakman spoke about his experience in a February 28, 2019 Waco Tribune-Herald article. “I’m feeling like a million bucks,” he said.. “But it never was about me. It was about everybody who was around me. They slandered my name; they fired my coach. I felt like all that was on me. I was a leader of Baylor, of Waco, of the community that I was in, and they took us down from the top.”

“They took the best player off the field and they took the best coach out of the Big 12,”Oakman continued in the article. “We are coming to get everything back because everything is ours and it never should have been taken away. We built this program from the bottom up, and they tarnished it. They said we was this, they said we was that. But they all taught us better. Coach Briles, Judge Starr, they taught us better. We are not animals.”

And there you have it – a young man who had to find his way through a life, when his mother was unable to raise him; his father died before he could have any relationship with him, so he clung with hope to an uncle who was the disciplinarian that loved him and an aunt who was his second mother.

Those two people showed up in court every day and never gave up. They were there when he was acquitted. And there they will remain, as he slowly picks up the pieces of his once promising football life and builds a mosaic that will be far greater than the one he lost.

In a January 25, 2015 New York Daily News article, the story of another promising football player robbed of his career due to false allegations is highlighted:

“Brian Banks was 16 years old in the summer of 2002, a 6-foot-2, 220-pound linebacker with speed at powerhouse Long Beach Polytechnic High in Southern California, as promising a football player as any high school kid in the country,” the article stated. “As one of the most highly recruited middle linebackers in the nation, he had a verbal commitment to play on full scholarship for Pete Carroll at USC.

Life isn’t fair, Banks says over and over in the life-coach talks he gives now, a devastating message that took flight for Banks on July 8, 2002. He was taking summer classes at his high school and left the classroom for what was supposed to be a quick call to a documentary crew preparing a feature on the rivalry with De La Salle High School in Northern California.”
“I stepped outside to make the phone call and I ran into a classmate of mine,” Banks says,” the article continued.

“Her name was Wanetta Gibson. She was a friend. She was 15.

“We met, hugged, started talking and agreed to go to an area on our campus that was known as a make-out area,” Banks says. “We went to this area and made out. We never had sex.”

By the end of the day, Banks was in custody, accused of raping Gibson on the school’s campus. But we never had sex, Banks pleaded. Nobody believed him.

Banks lost 10 years of his life, a frightful five years and two months in prison followed by five years of high custody parole.” (Eventually Gibson recanted her claim that she had been raped by Banks…but not before his life and career had been destroyed and her family had received 1.5 million from the Long Beach school system.)

“Banks now does volunteer work for the California Innocence Project. A movie is being made about his life that will be released August 2019. Banks also has developed a business speaking to schools all over the country. He has a strong message and an appropriate T-shirt. It’s a California license plate that says, XONR8,” the article concluded.

I guarantee you this — Shawn Oakman’s and Brian Banks’ lives are forever impacted, and they will never be the same because of this experience.

I challenge you all to do this — give the alleged victim the space to speak AND do a thorough investigation before allowing private accusations to become public, because as we can clearly see, sometimes the real victim is the one who was accused.

Disclaimer:
The views, thoughts, and opinions expressed in the article belong solely to the author, and not necessarily to the author’s employer, The Philadelphia Sunday SUN, the author’s organization, committee or other group or individual.

Hattie, Coretta, and women of the Movement