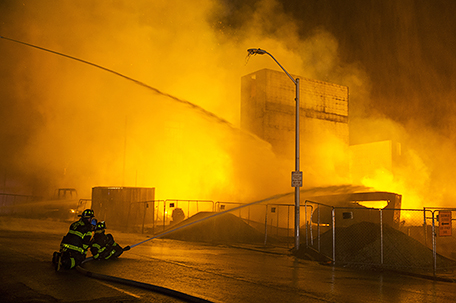 The current unrest in my hometown of Baltimore didn’t have to happen. But if we don’t as a nation start to address our savage inequities, it will happen again somewhere else.

Few things are worse than watching as your home burns to the ground, knowing that you’re powerless to do anything about it and that the people who could have prevented it have decided that it wasn’t in their best interest to do so.

It’s a feeling that I’ve been experiencing most of this week as I’ve watched hours and hours of news coverage of the riots in Baltimore that have followed the protests of the death of Freddie Gray at the hands of the city’s police.

You see, for me Baltimore is home. It’s where I was born and raised. I went to the city’s schools. I graduated from Morgan State University. I used to sell beer and hot dogs at the old Memorial Stadium.

So seeing my home burn to the ground, and watching the coverage on television and social media, has saddened me.

It’s also pissed me off.

But my anger isn’t necessarily directed at the young people who are burning police cars and looting stores. It’s not even really directed at news outlets like Fox and CNN that didn’t cover the peaceful protests that were also going on because there wasn’t sufficient Black dysfunction to hold their interest.

My issue was with the respectability politics that seemed to rise with the fires, providing their own foul stench. Baltimore’s politicians and regular citizens, almost all of whom are Black, seemed to care more about the destruction of property and appearances that they seemed to forget the reason why these kids were so mad in the first place.

Freddie Gray is dead. And while insurance will cover the costs of rebuilding the CVS, no amount of insurance is going to bring him back.

Don’t get me wrong. I don’t condone the rioting that often destroys Black communities and does nothing to solve the problem. But I also don’t condone the fact that people would rather not acknowledge that this unrest from our youth is a cry for help from a community of poor, Black, human beings who have been long neglected by the politicians and other adults who were supposed to look out for them.

Oddly enough, someone you wouldn’t have expected to have noticed this pointed it out. Although his team was forced to cancel two games due to the unrest, John Angelos, the chief operating officer of the Baltimore Orioles, still managed to keep what was happening in the city in perspective.

He tweeted the following:

“We need to keep in mind people are suffering and dying around the U.S. and while we are thankful no one was injured at Camden Yards, there is a far bigger picture for poor Americans in Baltimore and everywhere who don’t have jobs and are losing economic civil and legal rights and this makes inconvenience at a ball game irrelevant in light of the needless suffering government is inflicting upon ordinary Americans.”

Or, in other words, the riots in my hometown are the result of long-time neglect of problems associated with poverty, lack of education funding and the criminalization of poverty.

If that sounds familiar, it should. It’s the recipe for every bout of civil unrest that’s taken place over the last few years.

For example, in the West Baltimore neighborhood of Sandtown where Gray’s funeral was held, the unemployment rate is at 52 percent.

And the death of Gray, who had his spinal cord severed, was the tipping point of a problem that has been festering for a long time.  According to an investigation by the Baltimore Sun, the city has had to pay out more than $5.7 million in awards and settlements in 100 cases of police brutality since 2011.

It’s funny that Mayor Stephanie Rawlings Blake failed to call the once “thugs” like she did the kids who were rioting and looting. If severing someone’s neck isn’t part of the definition of “thuggery,” you need to tell me what is.

Part of the reason why I’ve always felt at home in Philadelphia is because of how similar it is to my hometown of Baltimore.

Because of that, I find myself asking the same questions of the elected officials in my hometown, most of whom are Black, that I’m asking in my new home when is about to have a primary in May.

What have you done, Mayor Blake and your fellow Black office holders, to provide jobs, fix a broken education system, stop institutional racism or improve the overall quality of life for your constituents? My guess is, not much.

So it’s time to bring up the “A” word: accountability.

It’s about time that we, and when I say “we” I mean the citizens in both my ancestral home and my new home, to hold all our politicians accountable without regard to race or party affiliation. It’s time to fervently push them to solve the issues of our cities.

Because if we don’t, we’ll be having the conversation that President Barack Obama talked about when he addressed the riots in the Rose Garden on Tuesday.

“If we really want to solve the problem, if our society really wanted to solve the problem, we could,” he said. “It’s just that it would require everybody saying this is important, this is significant and that we don’t just pay attention to these communities when a CVS burns and we don’t just pay attention when a young man gets shot or has his spine snapped. We’re paying attention because we consider those kids our kids and we think they’re important and they shouldn’t be living in poverty and violence.”

The CVS Pharmacy on Pennsylvania and North will be fine thanks to insurance and the largess of a multi-billion dollar corporation, but there will always be a void in the Gray family and for that matter in the Black community in my hometown.

Fla. woman doused in gas, set on fire at 7-Eleven