The Face Of Trauma 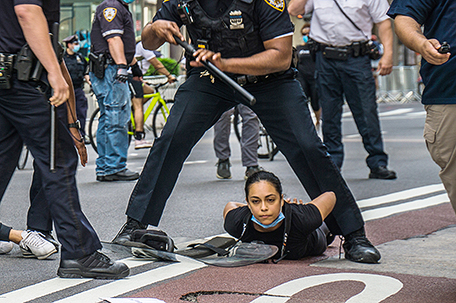 “And this is How Social Media Kills Black Folks…”

When you’re a Black kid from the hood, you’ll see beer stores on almost every corner, maybe a crackhead or two, sometimes even a tree branch with some teddy bears and balloons. Sometimes police sirens wake me out of my sleep or that sudden confusion of not knowing if you’re hearing fireworks or gunshots at night.

If you’re that same Black kid, then trauma is a product of your environment. And to be honest with you… I’m tired of it. Sometimes growing up Black may mean to not understand trauma when you see it, you may not even know it’s traumatic to you because it became something that is normalized in your life.

I grew up hearing my parents argue almost all the time, sometimes the arguments were bad and then sometimes it was horrible.

Then when you step outside your home, as you walk to the corner store I see people laying on the ground with a bottle in their hands, someone screaming “Do you have any change?” at me and passing that tree filled with teddy bears and balloons. That’s how you know you’re in the hood. And Black folks from the hood like myself, well, trauma, we can’t escape it. Trauma, Trauma read all about it! Haven’t you seen it? It’s all over the media.

The lives of black folks dealing with trauma is the number one headline on all platforms. The first thing I do when I wake up is check my phone, scroll down my timeline and there I see someone that looks like me, looks like my brothers or my neighbor being killed on camera.

The recent video of George Floyd, an African American man being killed by a police officer surfaced social media and the famous hashtag #BlackLivesMatter became the number one trending hashtag in 2020. A Black man crying out for his mother, weeping out that “I can’t breathe” and knowing that day was possibly his last when he said “they’re going to kill me.” One video turned into two, two into three and before I knew it, the disturbing video was all that I saw on my timeline.

At that moment social media became the hood I live in, that I couldn’t escape. Not only was trauma reflected in my environment but it was all in my mind and my eyes were consumed. The constant reposting of the video, the phone calls and conversations brought to my attention, every time I turned on the News, and here it was, trauma meeting me once again at my front door.

One day I decided to deactivate my accounts because my stomach literally could not disgust what I was seeing. Even then I couldn’t escape it and I found myself going into a depression.

The thought, the flashback of Floyd’s death was still so vivid in my mind, and at that moment, it was starting to kill me. I asked myself why is sharing the suffering and pain of Black folks a trend? Is it because our ancestors’ history consists of trauma with our background of slavery?

Is it because Black folks from the hood are used to hearing about death or the trees we may see around the neighborhood with candles, bears and balloons representing someone’s death? But never did it occur to me that sharing the pain and suffering of black people will be a part of activism.

We see these videos and we share them, and caption it with #blacklivesmatter to bring awareness to the injustice toward black lives, but do we pay attention to the stress and heartache we may cause on ourselves while viewing?

When we consume such content and we see a Black person being killed and not having any justice brung to them, we start to build pain and sorrow for this person, even more so because they look just like us.

The trauma we consume is all around us but when we see it on our TVs, on social media and the news, it’s almost like a maze that we are trying to get out of. And the constant consumption of trauma, and the reposting of each traumatizing video is how social media kills Black folks because how we cope may result in drugs, alcohol or even violence if we are not aware.

Not only is it ineffective but it can cause us to become numb or overtime, we can normalize seeing disturbing content. Before sharing, think about that Black kid that may come across it, what do we want them subjected too?