The Cultural Coach: Winner of the J. Whyatt Mondesire Scholarship seeks a world where diversity is reflected and respected 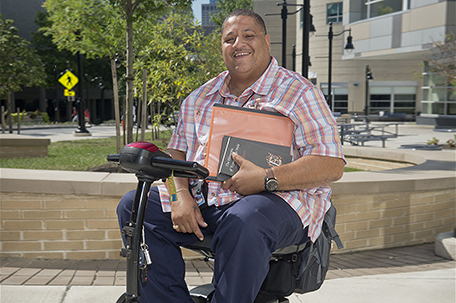 Troy Albert Bundy, the winner of this year’s J. Whyatt Mondesire Community Impact Scholarship at Community College of Philadelphia, wants many of the same things the late Philadelphia journalist and activist wanted: a more equitable world and greater opportunity for his children.

Bundy said he was grateful for the Mondesire Scholarship.

“By awarding me the scholarship, you have lightened my financial burden, which allows me to focus more on the most important aspect of school, learning,” said Bundy, 50. “I hope someday I’ll be financially secure enough to be able to help others in their struggles.”

The $1,000 award, funded by Mondesire’s friends and colleagues, gives voice to emerging leaders who have demonstrated strong leadership ability and have served as change agents in their schools, neighborhoods and faith communities.

Two-time Student Government Association (SGA) President Bundy led the successful student campaign to retire the College’s long-time mascot, Colonial Phil. Bundy and number of fellow students argued that the mascot, dressed in Colonial style clothing, was outdated. They argued that the College needed a new mascot that better reflected its community-centric mission and the diversity of the student body. The College intends to unveil its new mascot this fall.

Awards and accolades have been mounting for Bundy, who recently was named to the state’s All-Pennsylvania Academic Team, honored with the SGA’s service award and selected as the student speaker at CCP’s 52nd commencement on May 5th at the Liacouras Center. There are 1,885 candidates for degrees and certificates in the Class of 2018.

Bundy “definitely embodies the spirit of what Jerry stood for. Troy’s passion for diversity and activism along with his support for the underdog and less fortunate are the attributes we hoped the person receiving the scholarship would possess,” said SUN publisher and co-owner Catherine Hicks, Mondesire’s fiance’. Hicks and Mondesire’s son, SUN co-owner Joseph Mondesire, took over the SUN after Mondesire’s death.

Mondesire, who founded the Philadelphia Sunday SUN in 1992, advocated for the voting rights of African-Americans and for sanctions against South Africa. Before he passed away in October 2015, Mondesire took on leadership roles as head of the local and Pennsylvania chapters of the NAACP, where he advocated for quality schools and challenged Pennsylvania’s voter ID law. 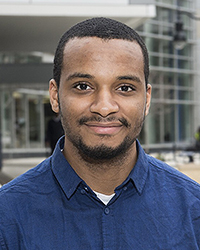 In addition to his other accomplishments, CCP President Donald Guy Generals also recognized Bundy, a work-study student, for his role in establishing and helping to stock the College’s new food pantry, which assists students who are hungry or food insecure.

Bundy also received the My Brother’s Keeper Award from the Center for Male Engagement, where he serves as a mentor to young men seeking to accomplish their academic goals.

“I’m a proud member of the Center and proud to help students not go down the same path I did,” said Bundy, who uses his experience as a former addict to mentor fellow students in recovery. “I see things through their point of view.”

For all his activism, Bundy never neglected his studies. With a 3.88 grade point average, he intends to continue his studies at West Chester University. What words of advice will he impart to graduates?

“In spite of personal challenges, hardships or current events, we have remained faithful to our heart. We have persevered. We have passed the test,” Bundy will tell his peers. “Thanks to everything we have learned so far, I am confident that we will keep climbing, we will keep learning, we will continue to achieve.”

Hazim Hardeman, a young Philadelphian and alumnus of CCP and Temple University, who started his academic journey near 23rd and Diamond Streets and ended up a Rhodes Scholar, was the keynote speaker at CCP’s commencement.