The Cultural Coach: Standing on the side of love, part I 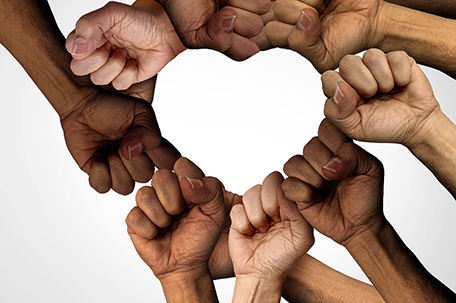 When singer-songwriter Bruce Springsteen urged us to meet in “The Middle” during Jeep’s stunning Super Bowl LV commercial, for one fleeting moment I was hopeful the message would get through.

This feel-good commercial, however, was much maligned by critics, who argued retribution – not compromise and conciliation – was the better path.

With picturesque spots of America as a backdrop, Springsteen urged our divided nation to meet in the middle, which just happens to be the U.S. Center Chapel in Lebanon, Kansas. The advertisement urged us to trade in rhetoric for enlightenment as it ended with the words: “To the ReUnited States of America.”

Jeep pulled the commercial after it was panned and then reported that Springsteen had been recently arrested for driving under the influence and other related charges.

In my mind, forward-thinking Jeep won the night. They were just a bit ahead of the rest of us, as corporate America has been lately. America has not been able to heal its lingering racial wounds, in part because citizens are guided by instinct rather than research when they respond to hate and bias.

Powerful displays of civility and inclusiveness matter in a world that is constantly battling hate, prejudice and division. It seems people may shift racial attitudes after encountering an appealing or friendly person promoting democratic messages such as inclusiveness, harmony or anti-racism.

In fact, Brian Lowery, now a professor of organizational behavior and senior associate dean of academic affairs at Stanford University Graduate School of Business, goes so far as to suggest that even subconscious racial stereotypes may be reversible.

He suggests that people may change feelings toward another ethnic group as a result of brief interactions with likable role models promoting egalitarian or democratic values.

Subconscious or hidden biases toward other racial groups often surface without our knowledge, Lowery’s research suggests. While conducting word-association exercises, he found that research subjects more quickly associated the faces of African Americans with negative words and the faces of whites with positive words.

However, if he exposed the participants to appealing African Americans or white Americans displaying democratic attitudes, such as an anti-racism T-shirt, these associations or hidden biases began to shift.

The group’s associations about African Americans were then less negative.

In an interesting twist, Lowery tried the experiment again using an unfriendly, though egalitarian, role model. This time the participants did not experience the same shift in attitudes.

So, you see, yelling at people and calling them racist may not be the better approach.

As The Cultural Coach, I have received many emails from people who feel combat – the use of sterile, blunt messages about racism – is more effective than my approach. I always ask: “Where’s your research?”

I next ask them to try their preferred approach for 12 months and write down all the breakthroughs and outcomes. Not one person has ever written me back.

Isn’t the end goal to open more hearts to healing, ears to listening and minds to understanding?

Lead by example, readers. Then write to me at [email protected] and share what happens next.

Next week in “Standing on the side of love, part II,” I will share some practical tips for serving as a friendly, egalitarian role model for justice and equality.

(Linda S. Wallace is a free-lance journalist and communication specialist who helps clients develop cross-cultural messages for the workplace and the media. Readers are invited to submit questions on work or personal problems related to race, ethnicity, sexual orientation or physical differences. Address your questions to [email protected])

Disclaimer: The advice offered in this column is intended for informational purposes only. Use of this column not intended to replace or substitute for any professional or financial advice. If you have specific concerns or a situation in which you require professional help, you should consult with an appropriately trained and qualified specialist. This column, its author, the Philadelphia Sunday SUN newspaper and publisher are not responsible for the outcome or results of following any advice in any given situation. You, and only you, are completely responsible for your actions.

The Cultural Coach: Labels are for packages, not for grandkids

The Cultural Coach: No room for prejudice in the workplace