The Cultural Coach: A Nation of Allies– Just what Starbucks’ needs 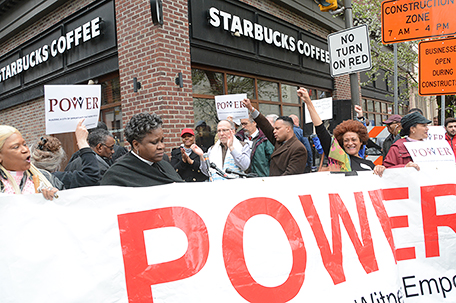 I was chasing a big story in a small Texas town when I came face to face to with my own biases. My trip to central Texas had not been an easy one. The man I came to interview declined to speak with me without saying why.

As an African-American, I immediately suspected it was because of my race. He was White, as was most of the town. When I checked in at a motel he had recommended, the clerk had told me the hotel was full even though I had a confirmed reservation. I got the room only after telling the lady that if she did not give me a hotel room, my editor back in Philly would likely think that I had been denied a room because I’m Black. “I don’t want to end up on the front page of Sunday’s paper,” I said to her. “Do you?”

I plotted my next steps over lunch despite the hostess making me wait 15 minutes for a table. I suspected my wait was long because I am Black, My eyes later caught a glimpse of the waitresses, huddled in a corner, laughing and pointing in my direction. That made me uncomfortable and I grabbed my check and headed for the cashier.  By that time, I was so paranoid, I was fearful I might be attacked on my way to my car.

At that point, one of the giggling waitresses sauntered over to me with a horrified expression on her face. “I hope we didn’t make you comfortable,” she said sweetly. “It is just that we have never seen a woman wearing a tie before. We love it. Tomorrow, we are all going to wear ties.”

When I became a national correspondent for the Philadelphia Inquirer in Texas, I quickly realized my designer clothes were not a good fit for the assignments ahead — a bus crash, hurricanes, protests, space shuttle launch, and more.

In order to blend in, I came up with a uniform – blue jeans, crisp white shirt, jacket, and boots for Texans and a skinny red tie with black polka dots – which I wore for fashionista Linda.

After using the waitresses’ cultural lenses to check out my outfit, it occurred to me there were plenty of reasons — other than racism — that the eyes in that small town might be directed at me.

With my cultural filters now in check, I was able to locate a European American man in town who was willing to answer my questions and help with my story: it was published on page one of Sunday’s newspaper.

Instead of returning home defeated by one man’s biases, I returned home exhilarated. I learned that when we can find allies, racism loses its power over us.

I’m sharing this to make a simple point about the latest company in the diversity hot seat, Starbucks.  Rashon Nelson and Donte Robinson were arrested in Philadelphia on April 12th.  The men were sitting at a table waiting for a business meeting and had yet to order a drink. A manager called the police and Nelson and Robinson were handcuffed and led from the store for trespassing.

Since customer videos of the incident went viral, Starbucks CEO Kevin Johnson has apologized. The company announced it would close more than 8,000 stores in the United States on May 29 for anti-bias training.

That’s a bold move, but it is not going to change the world. Starbucks can’t do that, but ordinary people can, if we decide to live as allies for each other.

What if a European American or an African-American customer had simply bought the men a drink? What if someone had pulled the manager aside to say, “ I just want to provide some cultural context here. I often sit here for hours, often without buying something. No one ever said anything to me. Why should the rules be different for them?”

As Starbucks prepares to close to train its employees, I propose we call for a National Day of Reflection and Learning. Although White patrons were outraged, no one apparently thought to give away their privilege, as an ally would.  A dedicated ally would not accept special treatment. Instead, he or she might have have said to officers, “if they broke the law just by sitting here, then I did too. They are my equal. I don’t want you to treat me any differently. Please arrest me as well.”

I don’t think there is much of a chance a White officer would have arrested every Starbucks customer in the store. I mean, how do you explain that back at the precinct?

As Starbucks confronts its collective biases, colleges and universities need to consider whether they are producing culturally competent graduates who can deftly navigate racial and cultural fault lines. They need to ask graduates — before they get that degree — whether they can stand up to corporate wrongdoing, racial injustice and even government tyranny. If you can’t, are you ready for the world we live in?

Additionally, companies need to recognize and celebrate culturally competent employees, for they are the ones who are going to save you when it’s your turn under the diversity spotlight. Perhaps you should learn who they are and help them lead your company forward?

Finally, each of us needs to identify and monitor our own biases so we can show others how to grow and how to change.

However, a nation of allies can make a gigantic dent in systemic racism. We just need to stand beside each other and confront injustice as it happens.

Taking out your camera and photographing an injustice done to a stranger does not make you an ally; it makes you a bystander.