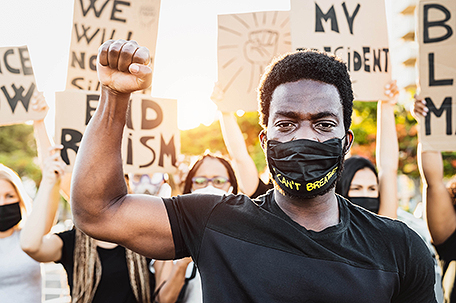 I forgive you. Simply because you may not know what it feels like to be continually subjected to  injustice, inequality, or racism. The lack of understanding on what Black Lives Matter actually stands for in today’s society is a conversation that brings discomfort.

Picture yourself driving along, minding your business on the road. You have no phone in your hand, you are not intoxicated, and you accidentally pass a red light. Flashing colors of red and blue are approaching you — but no big deal, you did not do anything that bad. When the police stop you and say “license and registration,” you go and reach for them,  then the officer yells, “DON’T MOVE, GO SLOW I’M WARNING YOU!”

You are puzzled and confused about what went wrong. You continue to try and reach for the requested information and again, the officer yells, “HANDS ON THE WHEEL!’’

You try to gain a sense of the situation, but with one blink or another hand motion and you are dead. That is the horror of being Black in America. Maybe a time machine trip with  a first stop to the continent of Africa — the motherland where this all started — could provide  insight. But I am no scientist, and I have no way of transporting you from one place to another. You are being invited to a ride on the vehicles of emotion and storytelling.

Now it is time to lose yourself and put your heart in a position of open mindedness. The first ingredient you need to gain knowledge is love. Have you ever heard about a tragedy or from someone who lost their loved one and felt saddened by the hurt that this loss may have caused the person? It is almost like you have lost a loved one yourself.

Imagine you have arrived in Africa in 1619 and you see men and women, even children, being forced onto ships and each person is packed on top of each other. You are looking from a distance, you see faces of confusion, tears and anger, and kids being separated from their parents. As you watch these events unfold like a fly on a wall, along the way you see people being thrown off the ship because of the unfortunate conditions they had to endure. These humans caused other human beings to die ruthlessly and without care. At the time, the lack of love for humanity led to inhumane acts. It was unthinkable to look at another Black person as a human or equal.

In the late 1800s, Black people were put on display inside of cages and in museum exhibits and treated as if they were animals. Black lives were held captive, forced to do hard labor, and separated from their families. Let’s time travel to the time of racial segregation; from ‘whites only’ bathrooms, separation of Black and white patrons in restaurants and on buses, but even more heavily affected within the education system, through residential segregation and limited opportunities, as well as the inability to achieve the same level of success as our white counterparts. Not only do Black lives have a history of mistreatment from the system, but that unfairness is still problematic in today’s society.

The spark of the Black Lives Matter movement began with the murder of Trayvon Martin, the African American teenager recognized for his hoodie, Skittles, murdered for “looking suspicious.” Eighteen-year-old Mike Brown’s body was left in the streets for four hours after being shot by a police officer; Eric Garner was murdered by police for selling cigarettes as he cried out, out “I can’t breathe!” 11 times  and 12-year-old Tamir Rice was murdered by police while playing with a toy gun, which was mistaken for  a real one.

Fast forward to May 25, 2020, when George Floyd is killed by a police officer for allegedly passing a counterfeit $20 bill, as the officer kneeled on his neck for eight whole minutes. Can you imagine someone kneeling on your neck for eight minutes? Can you imagine getting a call saying your 12-year-old son is dead because the police mistook his toy gun for a real weapon? Or how about not knowing if your loved ones are going to make it back home?

The Black Lives Matter movement is not a stand against other races or declaring that  the Black race is superior. That is the supremacist stance America has  taken when declaring that white people were better than Black people.

Instead, the Black Lives Matter movement is a response to a long history of systematic oppression, violence, and injustice. It’s knowing that “all lives matter” should mean being inclusive, equal and not “seeing” color.  But the uncomfortable truth is that the descendents of those who approved of slavery are the same ones running the system today. It’s like a bad smell that still lingers here in America.

Putting “happy” back into the holidays: Tips for overcoming the holiday blues