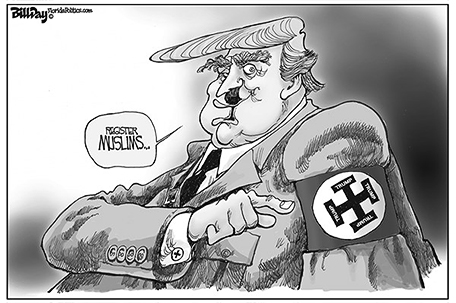 First, front running GOP presidential candidate Donald Trump cheers on a crowd at a campaign rally in Birmingham, Alabama that physically and verbally assaults a black protestor. He then follows that up with a tweet on phony and doctored black crime figures that were so racist that even some staunch conservatives cringed at the ploy. They didn’t buy his lame, partial walk back excuse that he was simply retweeting what a supporter sent him.

Trump is oblivious to this for a good reason. His unapologetic race baiting is a big part of what rocket launched him to the front of the GOP presidential pack and at a couple of points when he slid a bit, launched him right back to the front. The race-baiting is hardly new. The instant a multi-million dollar settlement was announced in 2014 with the five young African-American and Latino youths falsely convicted and imprisoned for assault and rape of a jogger in New York’s Central Park in 1989, Trump loudly ranted against the settlement and did everything possible to whip up another round of racial hysteria over the case. And why not? When the case broke in 1989 he shelled out $85,000 to four newspapers to splash an ad demanding the death penalty for the five. The toss of the case and the overwhelming evidence that the men were innocent meant nothing to Trump.

The record of Trump’s line of naked bigotry since then has been unbroken. He was ripped by the Justice Department for blatant racial discrimination in his apartment rentals and when cornered on his racist exclusion he blithely said that if he didn’t, his and other tenants (meaning white tenants) would flee from his units and the city.

He turned the thinly disguised racist savaging of President Obama into a fine art by stoking hard the phony, fraudulent, and bigoted Birther movement. Then he doubled down on that by demanding that Obama produce his supposed doctored college transcripts. Ever on the alert for an angle to race bait or to apologize for racism, he piled on the bandwagon to defend former Los Angeles Clipper owner Donald Sterling who was caught on tape making racist rants.

Even before Trump tossed his hat in the presidential rink, his well-timed racist digs, quips and slurs were carefully and calculatedly designed to get the tongues wagging, another round of invitations on the talk show circuit, and in the case of the Central Park Five, an invite to pen his race tinged scribbling’s in an op-ed column. His cynical but well-calculated race baiting ploy worked to masterful perfection with the Birther issue. Trump knew that while the issue had been thoroughly discredited and disavowed by every leading GOP presidential candidate in 2012, a significant number, if not a majority of Republicans actually believed or wanted to believe that Obama’s birth was a legitimate issue to dump back on the political table. The resulting avalanche of lawsuits and petitions filed in various state courts that contested Obama’s U.S. citizenship showed there was some mileage to be gained for Trump to continue to wave the issue around.

The pay-off was that he conned enough newsrooms, talk show hosts and legions of the GOP’s inveterate Obama bashers to chat up a Trump presidential candidacy. Trump got what he wanted. Tons of fresh media attention, a momentary seat at the GOP presidential candidate’s chat table, and starry eyed idolization from legions of ultra-conservatives and untold numbers of unreconstructed bigots.

The only real difference in what Trump has done with naked race baiting and what legions of other GOP presidential candidates and presidents from Nixon to George W. Bush, and GOP state and local candidates and elected officials have done with race is that his is blatant and in-your-face. The others were subtle, sneaky and loaded with emotional hot button code words and phrases that were designed to stoke the racial fires to win and maintain office. They knew that no overt mention of race was necessary to tug at the emotional strings of the GOP’s core constituency–white conservative, rural, and blue-collar workers. A wink and a nod with the code words on welfare cheats, entitlements, tax and spend big government, and immigrants, and the endless wedge issues from gay marriage to abortion was more than enough to boost their poll ratings.

But this is a different time. Polls show millions of whites are wracked with worry, concern, are edgy, and fearful about the future and the direction of the country, and the horrid thought of losing grip on their numbers and power. The usual stock code words and phrases that GOP establishment politicians worked so well in the past can’t compete with a good old fashioned appeal to black crime, Muslim bashing, and send them all packing back across the border shouts. Trump has proven that he’s the right man to say just that and reap a big reward for it.

Earl Ofari Hutchinson is an author and political analyst. His latest book is Torpedoing Hillary: The GOP’s Plan to Stop a Clinton White House (Amazon Kindle). He is a frequent MSNBC contributor. He is an associate editor of New America Media. He is a weekly co-host of the Al Sharpton Show on Radio One. He is the host of the weekly Hutchinson Report on KPFK 90.7 FM Los Angeles and the Pacifica Network