The Audacity of Pettiness: Black intellectuals need to find something better to do 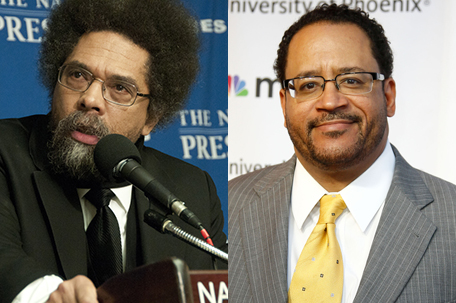 On Sunday, April 19, renowned professor and author Michael Eric Dyson penned a 9,220-word screed lambasting his former mentor Cornel West on The New Republic. The essay is meant to detail West’s decline from the leading Black public intellectual and cultural critic he once was. Instead, the piece tells us more about Dyson and West’s long-running feud, with Dyson performing the literary equivalent of taking off his earrings and greasing himself up with Vaseline, readying himself for a fight. Amid unnecessary, personal details that could have remained in the recesses of West’s books and the distant memories of the two men involved, the bulk of Dyson’s argument hinged on West’s diminishing scholarship, prophetic illegitimacy, and, most of all, West’s relationship—or lack thereof—with President  Barack Obama.

People in successful relationships—whether they be romantic, professional, or otherwise—often repeat an old adage: Sometimes it doesn’t matter who is right; if a relationship is worth preserving, choose your battles wisely. Not only has Michael Eric Dyson apparently decided his relationship with West is a forgone conclusion, but he seems to be ecstatically fettering it to an anchor and throwing it overboard. In comparing West to a jilted lover, it’s hard not to see the same distinctly personal rage emanating from Dyson’s keystrokes. Yet, buried amid this manifesto were admissions that Dyson, too, has issues with some of Obama’s moderate-leaning policies. So by publishing what amounts to a hit piece, the real question is: Why?

In a society in which black men and women are being killed at an uncomfortably high rate, and poverty and racism remain unwavering threats to our livelihood, we need our academics to be as eager in the front lines of protests as they are in front of the audiences lined up for their book signings. Our scholars have decades and decades of experience and knowledge among them. They have studied our movements and our leaders at depths few of us will ever have the privilege of reaching. We need our academics, all intelligent brothers and sisters, to use that collective knowledge to help provide solutions to stifling capitalism, ineffective Democratic party politics, and imperialist neo-liberalism and conservatism. So, again, the question to Dyson is: Why?

As Gary Younge wrote in a response piece on The Guardian, “The role of the public intellectual is to raise the level of public conversation so that it might better grapple with the complex issues of the day; Dyson’s essay further lowers it to the point of irrelevance.” Nine-thousand, two-hundred and twenty words have been dedicated to letting the world know something no one really cares about, compared to the systemic issues of racism and violence with which we are trying to grapple.

The world of academia is as competitive and insular as journalism. They abide by certain professional standards and ethics to which society at large is not privy until they publicize them. And because these two industries have access to the public’s attention, and the vocabulary to make any trivial matter engaging and urgent, the infighting that is central to their world becomes a headline in everyone else’s.

This is not to say we should shroud legitimate critiques of our peers in the cloak of respectability. We should not dumb down our misgivings about other Black people merely because we share a common history of struggle and the present forces of anti-black oppression. But we must also be aware that our choices have consequences. While they battle for academic supremacy, white supremacy is having a laugh at our expense. The New Republic is not The Root. We don’t have the luxury of tearing each other down in white spaces so publicly, no matter how far atop the ivory tower we have climbed. As Younge further states in The Guardian:

Black people are being shot dead in the street almost daily by trigger-happy cops and two ostensibly smart men, who have both produced excellent work and who pride themselves on being engaged academics responsive to the needs of the black community, are firing broadsides at each other.

Only Michael Eric Dyson will truly know his motivation for writing The New Republic piece. We can only urge him, and other black scholars, to think deeply about how they contribute to our progress as a people—of which they all have claimed to be committed—before they hit “send,” lest they stifle that progress merely to prove their own self-righteousness.

Malaika Jabali is a regular contributor at For Harriet. She has a J.D. from Columbia Law School. Her J.D. does not preclude her from communicating with cleverly placed emojis and on Instagram @missjabali. She also pretends to know about music and culture on her personal blog, www.freshphiles.com.