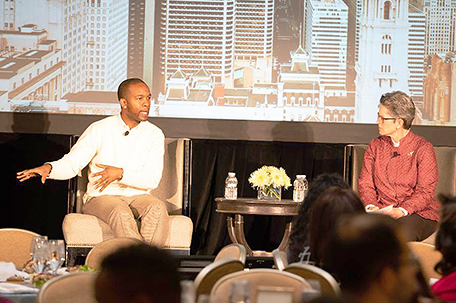 The event — which was sold out this year — returned to Philadelphia to again tackle issues surrounding diversity and inclusion, discussing not only problems, but solutions in the workplace, the marketplace and in the global community.

The two-day summit — which was held at the Ritz-Carlton Philadelphia — centered around the theme, “Where Diversity and Inclusion Intersects with Academic and Corporate Strategies.” Over 350 people were in attendance.

“This year’s conference has been an ultimate success, by far, welcoming many guests, far and near, to Philadelphia. Originally created for the hospitality industry, the D&I Conference has grown tremendously to encompass all disciplines and collectively educate all on how to successfully lead and implement best D&I practices,” Richard Lee Snow, the 2019 chair of the conference and PHLDiversity, said. “Today, with diversity and inclusion being an important conversation amongst all disciplines, we will continue to strive and foster a space where interdisciplinary partners, corporate leaders and speakers-alike, can engage and exchange thought leadership ideas for a more diverse and inclusive future. Looking forward to next year’s conference.”

The mayors addressed topics ranging from the responsibilities of sanctuary cities to gentrification and STEM opportunities for minority job-seekers.

“Welcoming cities are defined by the principals of inclusion and created communities that prosper because everyone feels welcome, including immigrants and refugees,” Epps read from a statement at the beginning of the session. The panelists were then asked to give their own definitions of what a welcoming city is to them.

“If you treat people the way that you want to be treated, you have to be welcoming,” said Rawlings-Blake, speaking on behalf of current Baltimore mayor Catherine Pugh, who was unable to participate in the conference due to illness. “ You have to create a way for [what is] in Baltimore over 50,000 new Americans…it’s not just about language competency, it’s about making sure that the services that the city provides are targeted to the things that they need, that the services are provided in a way that they can access them and offer ways that we can encourage civic engagement.”

Like many of the older industrial cities in the Northeast Corridor, the population of Trenton has been steadily decreasing, and its ethnic makeup has shifted in the process, Palmer told the attendees. In this regard, becoming a welcoming city is an asset.

“Being a welcoming city is not just something that you say; it’s not just a state of mind – it’s reality,” he said. “ You let people know that you accept everyone in your city without fear.”

On the topic of gentrification — which can be a lightning rod issue between long-term residents, developers and newer, younger residents — each participant outlined their individual cities’ approach.

Cities must be visionary and open to the newer generation of residents and modern businesses that are moving in, and to what their needs are, Rawlings-Blake said.

“If you don’t have a city that welcomes diversity, that welcomes communities other that the ones that are already there, you’re not going to get all of the benefits,” she said.

All of the mayors spoke of the upside of introducing mixed income housing .

“One of the things I share with my young people in Augusta is that a man or woman cannot be what he or she cannot see,” Davis said. “Many times in our communities of interest, I [longtime residents] live in poverty, and then I die in poverty. So, I’ve got to see something different. That’s why we’ve taken this very deliberative approach of being able to come in with development strategies so that we’re not just pushing people out.”

There were also several think tanks on offer for attendees.

An academic think tank led by Dr. Debra Blair, associate professor at Temple University’s School of Sport, Tourism and Hospitality Management (STHM), aimed at exploring best practices for incorporating diversity and inclusion content into academic programs and curricula. One objective was to share program strategies that provided comprehensive quality experiences for students of color, and the impact of diversity and inclusion on faculty recruitment and retention.

“The sport, tourism and hospitality industries are looking for students who can think in terms of diversity and inclusion, who are looking to incorporate them into everyday business practices,” said Jeremy Jordan, associate dean of STHM. “We know that business leaders are looking for those qualities in graduates, in prospective employees, and the Think Tank is one way we are exploring to give our students the skills to meet the needs of industry. We are examining everything that was discussed during the conference and finding ways to improve our program.”

At the conference awards dinner, the first-ever Diversity and Inclusion Award from Lodging Media was presented to Norman K. Jenkins, the president of Capstone Development, for his commitment and contributions to diversity and inclusion practices during his career in finance and hospitality. Capstone Development acquires full-service and select-service hotels in the top 25 metropolitan areas in the United States.

Proceeds from the conference and dinner will go towards the development of a D&I-focused scholarship for students at Temple University’s School of Sport, Tourism and Hospitality Management.