When the grassroots organization, Women on 20s, started an online petition to replace Andrew Jackson with a woman on the 20 dollar bill, many of us were interested, thrilled even, at the possibility of diversifying the current faces on U.S. currency. This week, the campaign revealed a winner: Harriet Tubman! Most people I know were pleased that Tubman was selected from among such a notable field of women. The finalists included Eleanor Roosevelt, Wilma Mankiller, and Rosa Parks. But then I saw a video clip of Raven-Symoné on The View (she’s currently a guest co-host on the show) in which she rejected the idea of Tubman becoming the new face on the $20.

“No offense to everyone who’s going to be mad at me for saying this. I don’t like that idea. I don’t like it. I think we need to move a little bit more forward… I would have chosen someone that is closer to the progression that we’re doing now,” she said.

Disappointed but not surprised, I shook my head and thought to myself, “That’s so Raven!” You know, the same Raven who denied being African American a few months ago. You know, Raven, the New Black who’d like to think that if they say it enough, the U.S.’s racial problems magically disappear. The New Black who wants the rest of us to move on—you know, “move a little bit more forward,” in her own words. 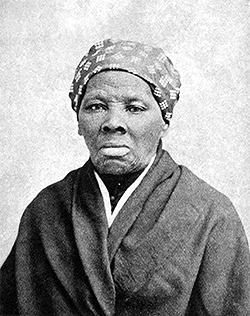 Raven said that she would have chosen Rosa Parks instead of Tubman, reflecting her desire for a woman who came later on the continuum of Black struggle. This preference reveals that she’d like for her twenty dollar bills to remind her of Reconstruction rather than of Antebellum. To be clear, the Jim Crow era was a horrific time to be Black in America. However, Jim Crow violence seems to be more palatable to some, compared to the brutality, dehumanization, and sheer callousness of slavery. In Raven’s opinion, slavery is too far removed from the “progression that we’re doing now.” She doesn’t understand that the work of abolitionists like Tubman made the work of desegregationists like Parks possible. (Ironically, Parks was born in the same year Tubman died—1913.) She also fails to realize that the 21st century discriminatory actions and violations experienced by Blacks in the U.S. are directly linked to the same racist ideology that justified the enslavement of our ancestors for over 200 years! Until this racist ideology is dismantled, Blacks will continue to be subjected to systemic racism and inequality.

And that’s why Harriet Tubman’s work is so very powerful: she blatantly rebelled against an ideology and a practice that would cause her and other Black people to remain enslaved and forever bound to White plantation owners in the South. Imagine her hunger for her humanity, her thirst for liberation—a hunger and thirst that compelled her into actions under the most precarious conditions. In order to begin to appreciate her impact, one must consider the context under which she worked—the 1800’s.

Harriet Tubman was born Araminta Ross into slavery in the early 1820’s on a plantation in Dorchester County, Maryland. Throughout her life, she witnessed the way slavery destroyed families and was determined to not only free herself, but her family as well. Her desire for freedom was stronger than her fear of death. In 1849, she initially fled with her brothers, who had second thoughts and wanted to return to the plantation. She returned with her brothers to the plantation and then left alone again to escape to freedom in the North, also leaving her husband. Despite a debilitating head injury she sustained as a child, she returned to the South 19 times during a 10-year period to lead approximately 300 slaves to the North.

Once the Fugitive Slave Law was passed in 1850, stating runaway slaves found in free states had to be returned to their owners, she rerouted the Underground Railroad to Canada. Tubman continued her efforts to liberate more slaves even though the reward for her capture escalated to $40,000 at one point! In addition to her abolitionist efforts, she worked with the Union Army as a scout and spy during the Civil War. During this time, she guided the Combahee River Raid, which freed more than 700 slaves in South Carolina. To honor her work the pioneering Black feminist organization, the Combahee River Collective, named their group after Tubman’s impressive feat. She was commemorated with a postage stamp in 1995.

Tubman was heroic, courageous, selfless, and smart. She was a maverick, abolitionist, humanitarian. These qualities are what earned her the title, “Moses of her people.” She risked her life for not only her own freedom, but also the freedom of hundreds of her own people. And she eventually reaped the rewards of her work by living as a free woman surrounding by family and friends in Albany, New York until her death. This is why I, and many others, regard her as a legend who is undoubtedly deserving of representing U.S. history on the 20 dollar bill.

Regardless of whether the “Women on 20s” campaign results in a change or not, Raven’s comments are misguided at best, and simply stupid at worst. Unfortunately, these nonsensical race-related comments are becoming typical of her. And so, we continue to find ourselves saying, “That’s so Raven.”

Altheria Gaston is a regular contributor at For Harriet.