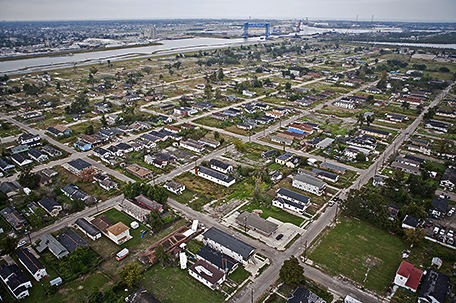 NEW ORLEANS – Ten years after Katrina devastated New Orleans, it’s time for midcourse corrections in the restoration efforts. The coalitions of foundations, nonprofits and government should pause to ensure that their investments will improve upon the pre-Katrina conditions in communities of color and that the racial and class inequities that existed prior to the storm are being adequately addressed.

Katrina was an awakening. The racial fault lines had been blurred in the city. Visits to Bourbon Street yielded fine food and music, but failed to paint a full picture of the city Their communities and their challenges were tucked away from view. But with Katrina, impressions of New Orleans changed dramatically.

When the hurricane struck on August 29, 2005, more than 80 percent of the residents had evacuated, leaving behind the most vulnerable – those with neither the means nor money to flee. New Orleans was predominantly African American (67 percent) and 27.9 percent of the city’s households were in poverty, including nearly 40 percent of the city’s children. More than 1,800 people died because of the storm, 123,600 people left the city and never returned, and the black population dropped to 60 percent.

The chaos and devastation that unfolded as the surging gulf breached levees designed to protect the city vividly demonstrated the impact of racial, housing, education and economic disparities. Many with access to information, transportation and funds for hotel rooms escaped, but those without resources were left behind — some desperately seeking rescues from their rooftops — to fend for themselves and depend upon badly flawed public services that failed them at this critical time.

In the immediate aftermath of the storm, people had to reconcile their perceptions of New Orleans. How had we missed the racial inequities for so long? It was so clear that imbalance between haves and have-nots were a major factor in where the blunt of the devastation was felt. Many communities of color were more vulnerable and thus their residents suffered far more.

This fueled the passion within the W.K. Kellogg Foundation to address the inequities.

The Kellogg Foundation had worked with grantees in New Orleans since 1942. Given these longstanding relationships, the WKKF Board of Trustees was compelled to help the children, families and communities recover. The board immediately approved a $12 million appropriation to help provide food, clothing, shelter, rescue and relocation, though the board’s focus was also on long-term recovery. The swift grant making also helped attract other support, as WKKF funding was at times matched by other foundations, companies like Home Depot, Time Warner, AOL, Walmart, McDonalds, and by religious organizations and government agencies.

Since August 2005, the commitment to New Orleans has not wavered: 270 grants totaling $90.1 million have been approved in the last 10 years. Yet, we have learned that one foundation, nor a group of foundations, can successfully address these challenges alone; there must be partnerships that include all segments of the community, especially government, businesses and corporations committed to providing opportunities.

Working with partners and coalitions, our work in New Orleans and the region after Hurricane Katrina has sought to lift families and children, helping to provide opportunities for them to thrive and an environment that improves life outcomes and restores hope for the future. The number of coalitions and partnerships is unprecedented in our work; we are energized by so many disparate segments of society uniting and connecting towards the goal of helping these communities rebuild. The tragedy has ignited a true sense of togetherness in this work.

Moreover, what we have learned in New Orleans has triggered a significant change in the grant making at the Kellogg Foundation. We learned from community leaders that crime and violence in residential neighborhoods is desensitizing the city’s children, causing them to lose their sense of worth and value. A generation of young people is being rendered powerless, with no security, no protection and believing they have no future. In response, WKKF adapted its funding priorities and is now mobilizing its partners to help heal the wounds of children and young adults, restore their sense of being and create environments where they can thrive. This work is part of a collective community resiliency strategy, one that is a critical segment of achieving racial equity in New Orleans.

Ten years after the storm, there also remains a need to rebuild infrastructure and systems. For example the education system, while improving, is largely failing to provide children with the tools needed to be successful. To their credit, the public sector recognized that the old system wasn’t working and boldly embarked into new territory, a system dominated by charter schools. But results are not universally good. Community leaders assert that special education and parent involvement has been shunned. In a recent poll by NPR and the Kaiser Family Foundation, 53 percent of black parents were concerned about their children’s education, compared to only 17 percent of whites.

Education is an area where the city should pause, work with the community and make corrections to ensure that all children are receiving a quality education. Educational success, achievement and job opportunities are all connected.

To be sure, some of the investments are working.

In 2011, young Bryaniesha Burks was in a rut. She and teenage friends were mired in poverty “sad, angry and depressed,” she recalls, because there was little hope that the so-called recovery of the city would ever affect their lives.

But life changed for Burks when she found Liberty’s Kitchen.

Established in 2008, the social enterprise transforms disconnected New Orleans youths by offering workforce and life skills training to unemployed and out of school teenagers and young adults. “I didn’t realize that I kept all that pain inside of me,” Burks recalls. “Every day, I would go about things in a negative way. I was a lost soul.” Now 22, and working at a job she loves, Burks says, the organization’s leaders “believed in me, when I didn’t believe in myself…They taught me to be brave.”

In the aftermath of Katrina, her story demonstrated there was hope and successes. It was possible, in part, because funders, such as the WKKF worked with nonprofits, businesses, community leaders, and local government to support Liberty’s Kitchen and the critical work that it performs. It demonstrated that pillars in our society can break away from their sector silos to form coalitions and partnerships that mobilized together to address barriers and help change hearts and minds.

Overshadowing many aspects of life in New Orleans is a racial past that must be acknowledged and healed. Portrayals of the 10-year milestone after the storm enunciate the divide in the city. While many gains have been achieved, but for communities of color it is not a celebratory time; it’s merely a marker to gauge the many challenges that remain and lie ahead.

Clearly, hearts and minds on both sides must be changed. Racial healing is a national WKKF endeavor that the foundation is bringing to local communities, such as New Orleans. Meaningful change happens locally. The foundation sponsored a healing day on Aug. 25 that brought representatives from all segments of New Orleans together – business, religious, community, academia and others to talk openly and frankly about race, its impact on the city and how wounds from the past can heal.

As some champions are emerging, we do see progress. Mayor Mitch Landrieu made clear in his recent public apology for the city’s prominent role in the slave trade, no conversation about the city’s future is possible without a discussion of race and an acknowledgement of the devastating role that racism has played in the city.

Through our work, WKKF has a better understanding of the trauma and the barriers presented by structural and systemic inequities. Our appreciation has grown for the resilience of the residents, their resourcefulness and their hope that better days lie ahead. The seeds for healing and progress are being planted and will blossom over time; we will continue nurturing teenagers and young adults like Ms. Burks. Her generation will be the light at the end of the tunnel.

A better New Orleans is on the horizon, but we must recalculate, taking what we have learned to implement fresh, informed ideas. And racial healing must be a part of it.

La June Montgomery Tabron is president and CEO of the W.K. Kellogg Foundation.

Cultural Coach: How to have a conversation that opens minds and softens hearts