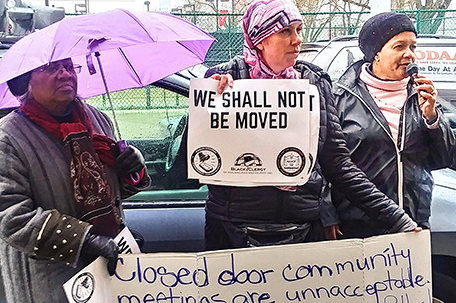 ABOVE PHOTO: Concerned North Philadelphia residents protest outside of the recent launch announcing Temple University’s North Central Special Services District that would include expanded surveillance by Temple Police and security guards. Black residents in the area targeted by the new district have complained of racial profiling by Temple cops while sitting on their own steps. Temple’s administration says the district is not connected to the proposed football stadium, but angry residents say,” You lie!” (Photo credit: Progressive Images Photo)

The more things change, the more they stay the same; as we say in the hood, same sh*t, different day.

The spectre of gentrification continues to spread in North Philadelphia with Temple University continuing its arrogant encroachment west of Broad Street with the launching of a North Central Special Services District.  A deceptive media advisory with a headline declaring “North Philadelphia Neighbors, Temple University partner to launch special services district” was circulated in an attempt to give the impression that this was the community’s idea.  This is far from the truth.

Last year, Temple president Richard Englert said a special services district was vital to the success of the planned football stadium. Now, he says it has nothing to do with a football stadium. Yeah, right. The proposed stadium would be smack in the middle. The boundaries of the NCSSD are from Broad to 18th Streets and from Dauphin to Oxford Streets – not on Temple’s campus.

An application to incorporate a Temple Special Services District as a nonprofit corporation to “provide services to the surrounding neighborhoods for the purpose of ameliorating impacts from Temple University expansion,” was filed with the Pennsylvania Department of State on August 29, 2018.  That’s back when Temple was pushing 5th District Councilman Darrell Clarke to sponsor legislation for a city-supported special services district. Clark has since changed his “public” position on the proposed football stadium, but Temple moved forward with a privately-funded ($500,000) special services district.

Someone must have advised Englert that a Temple Special Services District would anger the community, so on March 18, 2019 they amended the application to change the name to North Central Special Services District. Makes no difference the name, the purpose is the same. Temple University is a primary partner with those working to gentrify and control North Philadelphia.

According to its website (www.northcentralssd.org), the mission of the NCSSD is to “build a coalition of resident, business and organizational partners to collaboratively enhance the quality of life for North Philadelphia residents who live adjacent to Temple University.”  It will also include increased surveillance by Temple Police and security guards.

Another layer of police?  Black residents already complain about being racially-profiled by Temple cops.

Englert wants to model the NCSSD after the University City District. However, the UCD is a partnership of anchor institutions, small businesses and residents. The only North Philadelphia institution involved in the NCSSD is Temple, and to my knowledge, no small businesses. This is a Temple Trojan Horse.  Other nonprofit institutions in the immediate area have been doing what Temple is proposing with its special services district, but weren’t invited to the table.

For nearly 30 years Beech Community Services has provided free services to the North Central Philadelphia community like street cleaning, community events, funding and being a voice for community empowerment.

With headquarters located at 15th & Cecil B. Moore, Beech has developed the Cecil B. Moore business corridor, has a street-cleaning team, including a street-sweeping machine, and is also a RCO, but wasn‘t included as a community partner.

For some reason, Temple started a special services district in the area without ever contacting Beech to participate in meetings pertaining to their new organization. Clearly, this is a failure in transparency and community relations.

Just like on the plantation, Massa always sends house Negroes to infiltrate the field Negroes’ meeting to report what they’re planning. Temple has persuaded a few hand-picked Negroes to join the NCSSD board. The “community representatives” on the board are: Joan Briley, Milton Pollard, Charlotte Savage, Kay Thompson and Estelle Wilson.

Activists in the community feel betrayed by people they thought were allies.  Jacqueline Wiggins, a 32nd Ward committee person and Stadium Stomper leader was livid when she saw the board at the launch. Several of them used to attend Stadium Stompers meetings and one named the Stadium Stompers, but never told the group about their meetings with Temple.  Whether they are being paid or not, why the secrecy?  This is another divide and conquer tactic on the part of scandal-filled Temple University?

Others see it as a “sinister plan of attack” against the community. Gail Loney, block captain, activist and Stadium Stomper leader thinks the way the special services district was convened is “one of the many problems the community has with Temple that has repeatedly shown the community that they are untrustworthy on so many levels going back to the Charrette agreements of the past that were ignored.”  Temple has never been impartial enough to bring resources to the community without strings attached. So what is the special services district really being set up for?  You know the answer — it’s a Trojan Horse.

Longtime activist Ari Merretazon laid it out in a conversation on the subject. He calls it community pacification – a high end “flim-flam.” Pacification is a process used to invest and take over communities through collaboration with local leaders.

It’s a tactic used on low- and moderate-income residents by investors to make them feel special. In order to be successful, the gentrifiers must get the elected officials, neighborhood leaders and hostile residents to collaborate by appeasing them with what Merretazon calls Doo-Doo Dollars (DDD) diplomacy or by policing crime. When a fellow organizer/activist becomes an ally of the gentrifiers it’s treasonous behavior! They must be isolated and exposed publicly. As the brother said, “DDD will challenge a person’s integrity and belief. It’s almost impossible to defend.”

He’s absolutely right. Temple University’s special service district is built on a mountain of doo-doo. Time to get the pooper scooper.

Disclaimer: The views, thoughts, and opinions expressed in this article belong solely to the author, and not necessarily to the Philadelphia Sunday SUN, the author’s organization, committee or other group or individual.