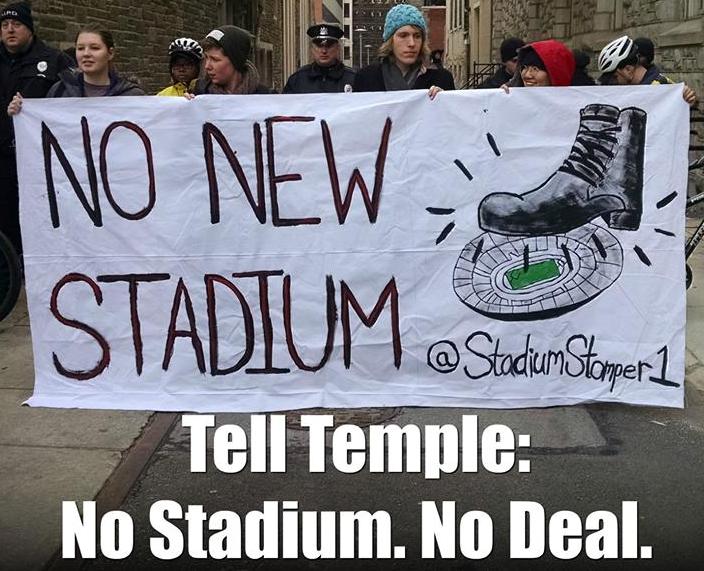 By Rev. William B. Moore
No Stadium No Deal Coalition
Many of us in the North Philadelphia communities surrounding Temple University read with great interest the op-ed by the university’s president, Richard Englert, and its provost, JoAnne Epps, in which they expressed extensive regrets and apologies for the university having submitted to U.S. News and World Report many years of inaccurate and misleading reports about a wide range of programs at its Fox Business School.

Perhaps that’s what universities must finally say and do when they are subject to investigations by the federal Department of Education, the Commonwealth of Pennsylvania’s attorney general, and under extensive media scrutiny.

As pastor of Tenth Memorial Baptist Church in the largely African-American community adjacent to Temple’s campus, and as one of the leaders of the No Stadium No Deal Coalition, which is diametrically opposed to Temple’s proposed 35,000-seat football stadium, I was surprised to read about Temple’s new apologetic, problem-solving, trust-seeking posture. This is a face of the university that we have rarely, if ever seen in our infrequent meetings with its leaders.

Englert and Epps’ op-ed focused on “regaining trust,” which was especially unnerving to those of us who have been the victims of ongoing and systematic, government-supported encroachment by Temple, dating back to 1969. As decades have past and the campus has grown, the university has reneged on a litany of commitments to work with its neighbors to spur socioeconomic growth and to minimize expansion-related resident displacement and disruption of quality of life.

We were frankly surprised to see Temple’s leaders in that same op-ed, offer that the university “apologizes for controversy and vows to correct its academic misrepresentation problem.”

It was no less surprising given our ongoing negative experiences with the university, to read that Temple has, since the “business school ranking crisis,” recognized that its actions in responding to that controversy must be “open and transparent,” and that it will do all it can to “safeguard the public trust that is essential for a public university.”

They said, “People must be able to trust what we say and do, and Temple must be counted upon to take steps necessary to guarantee that trust.”

Yet, even while those lofty words were being published, our community continues to be incessantly threatened with having a $135 million construction project imposed upon it, which will require substantial amounts of additional parking and the permanent closure of significant sections of 15th Street in North Philadelphia.

Those actions will result in even more negative impacts on residents’ quality of life, and have been opposed by the neighbors, by Temple’s Faculty Senate and by its student leaders. Among the members of the Temple community it seems the primary drivers of the North Philadelphia football stadium concept are the university’s trustees.

While we’re pleased to see Temple’s leaders proclaim that maintaining trust is now “sacrosanct,” we are still awaiting the university’s recognition that thousands of other key Temple stakeholders, the residents in its surrounding community, are opposed to the invasive football stadium concept.

We do applaud Council President Darrell Clarke for his previous statement that he does not and will not support the stadium. He pointed out that Temple missed a great opportunity to repair its relationship with residents. We say amen to that.

We in the North Philadelphia community are not fundamentally opposed to the university, nor are we opposed to reasonable and appropriate development in our neighborhoods.

In fact, we have proposed to Temple that it use its considerable energies and financial resources to commit to a meaningful socioeconomic partnership with its neighbors, as was initially proposed in 1969, and was designed to include job creation, contract opportunities, affordable housing, and cooperative neighborhood planning.

We further believe that such a plan would be a substantially more effective tool for student enrollment and faculty/administration recruitment than a controversial, ill-conceived, on-campus football stadium ever could.

We look forward, as always, to opportunities for future discussions with Temple University leadership on these critically important issues.