Surprise! The Blue Line is even drawn around Black cops who slay Whites 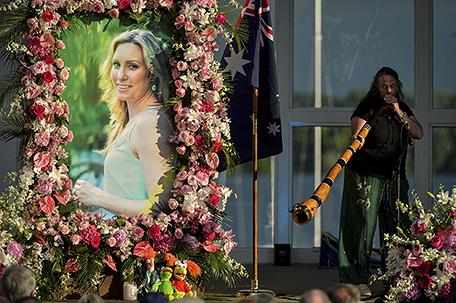 ABOVE PHOTO:  Johanna Morrow plays the didgeridoo during a memorial service for Justine Damond Friday, Aug. 11, 2017, at Lake Harriet in Minneapolis. Damond was killed by a Minneapolis police officer on July 15 after she called 911 to report a possible sexual assault near her home. (Aaron Lavinsky /Star Tribune via AP)

Noor’s defense and support for him would be no different than if he were a White officer and his victim were non-white.

It was widely considered a foregone conclusion that Minneapolis police officer Mohammed Noor would be indicted, tried and likely convicted in the shooting death of Justine Damond. He was Black, a Muslim, from Somalia and had prior complaints against him. She was a White, middle-class Australian national, and a popular meditation and yoga instructor. She was shot in her pajamas, at her home, following her complaint of a possible assault in the alleyway behind her unit. A fellow Minneapolis police officer at the scene gave perplexed testimony as to the shooting. The mayor, the former police chief, and a legion of city and state officials condemned the shooting. There was even a brief international uproar over it.

So all the ingredients for the rarity of rarities was in place: namely, the prosecution of a cop who seemingly wantonly killed an unarmed, innocent civilian. The most compelling ingredient, though, was race. He was Black. The victim was a White woman. This seemed to seal the deal for a prosecution.

The killing took place on July 16, yet weeks later, there has not been another peep from Minneapolis prosecutors or city officials about the killing. The Minneapolis Police Federation took some heat for its pro forma ringing defense of an officer accused of misconduct, including the seeming unjustified use of deadly force. The union official simply said he’d wait until the investigation was complete before saying anything. This brought the charge that the union was kicking Noor under the bus. 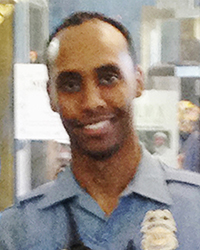 It was anything but. Union officials didn’t have to say a word about it. Their silence spoke for itself in not condemning the shooting and playing for time with an investigation that might well conclude that there was no criminal malice in the shooting. This amounted to tacit support of Noor. The investigation could provide the get-out-of-prosecution card he needed. He refused to talk to any investigators about the shooting. Eventually, he will have to talk to the department’s internal affairs investigators. By then he, and his attorney, will have had weeks to have prepared a very carefully tailored statement giving his version of the shooting. Even then his statement will not be available to outside investigators of the killing.

Noor has yet another fail safe tactic to avoid prosecution. Under Minnesota law, public employees being investigated for misconduct are not compelled to provide any information. The consequence of a refusal is that they face disciplinary action. The worse that could happen to Noor if he clammed up was that he’d likely be fired. But again, he might not be. In any case, the time clock is running on the time lapsed since the Damond slaying. Time enough for public passions to cool and memories dim. Noor, and his attorney, have helped make sure that happens by remaining stone silent with the media and the public about the killing.

Meanwhile, Noor is on the standard administrative leave. He’s still a cop. He’s still being paid. He’s still a union member, and if there is any action against him, he would almost certainly be immediately freed if arrested. He will have his legal fees paid by the union and will be assured of having top gun attorneys who know the ins and outs of defending cops charged with misconduct. In short, Noor’s defense and support for him would be no different than if he were a White officer and his victim were non-white.

The deafening silence from Minneapolis prosecutors, even though Noor is Black and Damond White, is also really no surprise. The same rules apply as if he were an accused White officer. If prosecutors decide to take him to trial, they will have to overcome the inherent skepticism of jurors that cops break the law, and recklessly and criminally use deadly force. The presumption is that they are much more likely to believe the testimony of police and police defense witnesses than witnesses, defendants, or even the victims. Meanwhile, defense attorneys will file motion after motion on everything from the demand for a change of venue to a bench trial, without jurors. Even when the motions are denied, the clock is still running pending the decisions.

That time lapse again serves to put yet more time and distance from the killing and the public’s awareness and concern about it.

The even more daunting problem is that there is no ironclad standard of what is or isn’t an acceptable use of force in police killings. It comes down to a judgment call by the officer. The time-tested standard that is virtually encoded in law is that “I feared for my life.” This will be stated, massaged and repeated in every conceivable way by defense attorneys during their presentation. Noor has said that he heard a noise and that would be construed as a gun shot and that justified the use of his gun. The message being that the use of deadly force was both necessary and justified.

Noor, of course, may yet be prosecuted. But one thing is for sure: the blue line has been drawn tightly around him, too.

What Happens When Police Slay a White Woman?