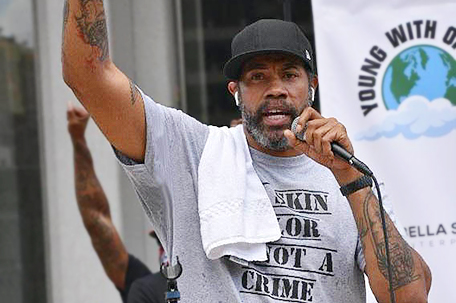 Philadelphia native and former NBA star Rasheed Wallace has launched a grassroots movement to assist in improving the socioeconomic and health conditions of African Americans who live in urban areas.

“Our whole mission is to try to bring brothers and sisters together, across the globe,” Wallace, a Philadelphia Sports Hall of Famer and 16-year NBA veteran, said.  “We all have to come together as one.”

Wallace kicked off his city-to-city tour in Philadelphia, forever home to the star and a place he says he’ll always love.

The “Philly Legend” galvanized a Juneteenth rally amid the growing coronavirus outbreak, calling on influencers, community members, local business owners, and his NBA friends for support.

“I have the support of a lot of people. We’re trying to make a difference by making a change in people’s lives through these efforts,” Wallace said.

With the assistance of local businesswoman Quiana Montgomery and former NBA player and friend Stephen Jackson, the Juneteenth rally in Philadelphia included a peaceful protest and gathering in City Hall.

It was a call to action, a moment of reflection, and a celebration focused on unity.

“It’s about empowering and uplifting the community,” Quiana Montgomery, Philly Juneteenth Rally community partner and owner of the Q-connect, a Philadelphia based brand management and marketing agency, said. “Being an accountability partner for the community and holding those in power, those who serve the community, and members of our community accountable for their actions.”

While the activity highlighted and recognized freedom celebration for Black people in America, it also brought attention to many injustices that they continue to face, including excessive police force, the unjust killings of unarmed people and called for justice in response to the recent murders of George Floyd and Breonna Taylor.

“We’re discussing ways about how we can become better people,” Wallace said.

“I can donate money, but I’m out here doing the work,” he said. “What better way to encourage other people to make a difference in their communities than to go out there myself and work towards making a difference.”

“These men [both Wallace and Jackson] walk around with no security and they talk to the youth. They are hands on and I’m forever grateful to work with them and see not only the work they put out, but the difference that it is really making,” Montgomery said.

“Philly is a special place to Rasheed because this is his home and he’s taking what he’s learned from the people in Philadelphia who mentored him, installed love and care into him, and taught him the importance of giving back and never forgetting where you come from, to serve not only in his hometown but other people in urban areas across the country,” she continued.

Since gathering in Philadelphia, Wallace and his team have organized relief efforts for the people of Flint, Michigan, and connected with Detroit residents in partnership with New Era Detroit, a non profit organization and other community leaders.

His efforts to serve the residents of Flint due to an extreme water crisis has been ongoing for six years now.

“When Flint first got hit with this catastrophe with contaminated water, my family and I, and our friends from North Carolina and Philly drove to Flint to provide resources, he said. “There we met other  positive brothers and sisters doing the same thing. One of those positive groups was called New Era Detroit,” said Wallace. “Since then we’ve supported each other’s efforts and they have been a community partner,” he said.

During his visit to Flint this summer, Wallace distributed bottled water, personal care and hygiene products, basic needs and new necessities like sanitizer and gloves.

“It was sad to see people still in the same situation from six years ago,” he said.

“Just imagine that. We can often take it for granted that when you wake up in the morning one of the first things you do is go to the bathroom to brush your teeth, wash your face with clean water and hop in the shower. For the residents of Flint, to not be able to do that for the last six years or so, and the fact that many are taking bird baths with heated up bottled water is an injustice.”

“I understand that most people are now focused on the pandemic and COVID-19 but this is a health crisis too,” Wallace  added.

After visiting Flint, Wallace organized a two-fold outreach project in Detroit, hosting a day of giving, providing meals for families followed by a rally for equality and justice the next day with New Era Detroit.

According to Wallace’s team, food has been a growing need in many areas due to COVID-19.

Spreading brotherly love in true Philadelphian fashion, Wallace and his team will be in Charlotte, North Carolina from August 21-22. He is planning to organize more community outreach efforts  in Chicago and Pittsburgh for the remainder of this year.

“Taking care of our own people is important,” Wallace said. “By providing resources we are fulfilling a need. Furthermore, we’re talking and engaging with people to see what we can do better.”

On Friday, August 21, Wallace and a team of folks will feed and provide resources for those in Charlotte’s ‘tent city.’ He is also inviting his former NBA colleagues and celebrity friends to attend a peaceful march and rally that is scheduled to take place at the West Charlotte High School in North Carolina.

Wallace plans to return to Philadelphia in September for a back-to-school supply giveaway and proudly announced that he will make the Philly Juneteenth Rally an annual tradition.

“I don’t want your money. I want your time and your effort,” he said.“It’s just all one movement.”

The time and date for the back to school giveback is still to be determined, but it is said to be a partnership with elected officials who represent the North Philadelphia area.

Wallace grew up on the 1700 block of Jefferson Street in North Philadelphia and he wanted to go back to his old neighborhood and assist those who can use some help and support.

“These are community connections with a call to action,” Wallace explained. “The only way to make change is to do it, and let those people you’re trying to make that change for see you first hand working towards creating that change.”

“We have to think about our young brothers and sisters out here that’s in these communities,” he added. Give them hope and reason to believe in their communities again, how we did when we were growing up.”

Wallace reflects on his days growing up in Philadelphia and how the critical acts of loving thy neighbors and community parenting helped to shape him as a young man and build character.

“Where I’m from, Germantown, Philadelphia, there was community parenting,” Wallace recalled. “If the lady down the street or on the next block over, knew my mom and saw me doing something wrong, she had the permission to straighten me out and then guess what? She’s going to tell my mom and my mom would deal with me also.”

“We need that community love, that community raising.” he continued. “Just as the old African proverb states, “it takes a village to raise a child.” That’s what we’ve gotta get back to.

When asked what can people do to help others face challenging times, Wallace replied, “We have to stick together as positive people.”

Regarding positive change, his advice was to start with yourself and take a look in the mirror.

“First and foremost I think we have to start with self,” Wallace said. “Once you start with self and figure out how do I become better and what will make me become a better person, that positive change begins. It starts with small steps.”