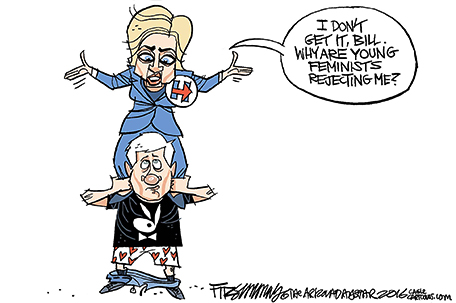 Bill Clinton barely got the words out of his mouth lambasting the Bernie Sanders camp for what he bluntly said were attacks on Hillary that were to sexist and too “profane” to repeat when a Sanders campaign official shot back that the attack was “disappointing.” Sanders, for his part, took the high road approach, acknowledged that he’d heard some nasty things from his supporters about Clinton, and demanded that they knock it off.

The brutal reality is that no matter how much Clinton and Sanders call for civility when it comes to what’s said about Hillary, it won’t happen. Clinton is not simply another marked man presidential candidate. She’s exactly what she was in 2008, a marked woman. One media investigative team even compiled hundreds of the most outrageous digs about Clinton from the 2008 campaign from assorted commentators, male and female. Not much has changed this go round.

The vulgarities are heaped on top of the hard-headed belief of many men and women that a woman just doesn’t have the right stuff to be the nation’s Commander In Chief. In one poll, nearly 70 percent of men and women were lukewarm at best in answering the question whether they thought women were “respected” in politics. One out of four respondents flatly said that there would never be a woman president, and the most optimistic thought it would take at least another five years before that happened.

Even this seemed to be a step up from polls during the 2008 campaign that consistently showed that far more Americans had a bigger problem voting for a woman for president than an African American. The worst part of that then was that if any one dared make a racial crack about then Democratic presidential candidate Barack Obama they’d have been pounded into the sand as the worst kind of bigot.

The big worry for the Clinton camp then and now is not the sexist innuendoes, wisecracks and even the double standard that Clinton herself has more than once made note of. The problem is how many voters might be scared away from Clinton and run to the GOP presidential rival if she wins the nomination. There’s good reason for the scare again. The gender gap was first identified and labeled in the 1980 presidential contest between Ronald Reagan and Jimmy Carter.

That year Reagan got more than a 20 percent bulge in the margin of male votes over Carter. Women voters by contrast split almost evenly down the middle in backing both Reagan and Carter.

Men didn’t waver from their support of Reagan during his years in office.

Many of the men that backed Reagan made no secret about why they liked him. His reputed toughness, firmness and refusal to compromise on issues of war and peace fit neatly into the often time stereotypical male qualities of professed courage, determination and toughness. The gender split is always apparent when there’s a crisis such as a brush fire war, a physical conflict, or the threat of a terrorist attack.

This was not a major concern for men.

Far more women than men said that the troops should be withdrawn as quickly as possible.

The huge spread in male and female views on public policy issues was just as pronounced in the terrorism war. More men than women took a harder stance against nations that they perceive back terrorist groups. In countless surveys, polls, and anecdotal conversations, women say they are less likely to stay up on political issues than men, and are more likely to vote for a candidate based on personal likes or dislikes than men.

When asked what they liked about Clinton, many women reflexively say they like her toughness. That’s generally considered a rough-and-tumble male quality.

The issues of war, national security, strong defense, and terrorism doesn’t totally explain the constant 15-to-20 percent gender gap between men and women on candidates and issues in elections noted as far back as 1980.

Another possible explanation for that is how men and women perceive the messages that male candidates convey and whether they use code words and terms to convey them. Republicans at times artfully stoked male rage with racially charged slogans like “law and order,” “crime in the streets,” “welfare cheats,” and “absentee fathers.”

President George W. Bush’s John Wayne frontier brashness, and get tough, bring em’ on rhetoric in talking about the Iraq and the war against terrorism was calculatingly geared to appeal to supposed male toughness.

The issue that time around isn’t Clinton’s toughness, it’s just everything else that a woman presidential candidate has to swallow because she’s a woman. Bill’s broadside on sexism and Hillary just underscored that — again.

Earl Ofari Hutchinson is an author and political analyst. His latest book is Trump and the GOP: Race Baiting to the White House (Amazon Kindle) He is a frequent MSNBC contributor. He is an associate editor of New America Media. He is a weekly co-host of the Al Sharpton Show on Radio One. He is the host of the weekly Hutchinson Report on KPFK 90.7 FM Los Angeles and the Pacifica Network.

Why so many white men still don’t like President Obama