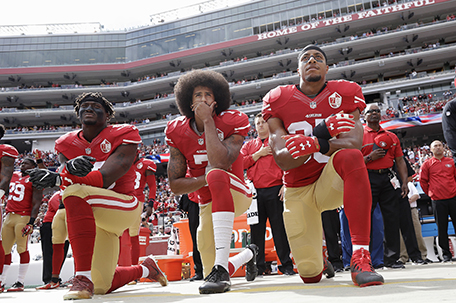 San Francisco 49ers (from left) outside linebacker Eli Harold, quarterback Colin Kaepernick, center, and safety Eric Reid kneel during the national anthem. What started as a protest against police brutality has mushroomed a year later into a divisive debate over the future of Kaepernick who refused to stand for the national anthem and now faces what his fans see as blackballing for speaking out in a country roiled by racial strife. (AP Photo/Marcio Jose Sanchez, File)

The model of plantation life is representative of what is experienced by a large percentage of Black folks’ during their sojourn in America. Navigating and negotiating between rules, laws, and regulations designed by everyone but them is being manifested through the National Football League big time. Who owns and who controls what draws a clearer picture of management-labor relations than most other institutions presently. It has even struck at the heart of the Nation’s pride – its national anthem and the flag.

The 32 teams constituting the league have all White owners with roughly 1,900 players, in of which case nearly 70 percent are Black men. Needless to say, these owners enjoy enormous profits as business people do. However, when examined, the rates of return on their investment far outstrip the profits that the rest of the economy shares. The average revenue of each owner per season is more than $100 million. The average audience per game is estimated at 69,000, and $18 million is generated per game. Anyone can see how these team owners could easily contribute $176 million to President Trump’s run for the Oval Office. Revenues climbed from $6 billion in 2004 to $12 billion by 2015. This industry player (NFL) has proven to be fireproof in an economy still recovering in certain sectors from a major recession. They have been in a universe of their own, with the public subsidizing the building of the stadiums where the whole drama plays out.

This universe is shaken now that one man — Colin Kaepernick — rattled the consciousness of the country about police brutality and the compounding crime of widespread cover-up. The importance of this issue — which especially radiates through the Black and Latino communities — is being lost due to President Trump’s “Make America Great Again” sloganeering rhetoric, which is currently being directed toward those who are allegedly dishonoring the flag, veterans, soldiers and national anthem. Colin Kaepernick — in kneeling during the singing of the anthem and pledge to the flag — is not disrespecting neither, but instead is alerting an unconsciousness nation that each time you decide through action or inaction that Black lives don’t matter, you disrespect your own flag and country!

The history of the National Anthem is a dark history that conceals the real sentiment of its author Francis Scott Key, a slaveowner and hater of the runaway slaves who fought with the British in the War of 1812. The American Flag Code, established in 1942, cites violations in which most cases are non-punitive. The code states that the flag should never be marked on, yet Sarah Palin campaigns around the country signing her name on the American flag. The flag should never be displayed horizontally or touch the ground. Yet in major football games, this horizontal display and allowing the flag’s descent to the ground is continuously allowed. The late Jackie Robinson once stated, “I cannot stand and sing the National Anthem.” Muhammad Ali refused to fight in a war for a country that was at war with him and his people. Let us not forget that Olympian champions John Carlos and Tommie Smith, who raised their fists during the anthem, and world-renowned track star Jesse Owens, who reminded this nation that while Adolf Hitler never snubbed him, President Franklin D. Roosevelt did when he invited other winners in the games to a victory celebration. The president excluded Owens, even though he was a four-time Olympic Gold Medal winner.

NFL team owners make out very well, however, for the players, it’s a different story. Nearly one-third of the 1,900 players are gone after each season. The average career life span of an NFL players is 3.5 to 4 years. Life after football shows a dismal picture for retired players. Nearly 4,500 former players express symptoms of brain damage, and nine out every 10 suffer a myriad of body injuries and chronic pain.  The famous player and sports broadcaster Johnnie Unitas reportedly has lost the use of his arms and fingers. Neurologist Dr. Ann McKee informed the New York Times that “It is no longer debatable whether or not there is a problem in football.”

The financial life of the former player is a story that doesn’t get any better. Players’ finances suffer from investments with family, questionable agents having access to their accounts, peer pressures to indulge in luxuries and finally the players’ own appetites. All these vices have left many former NFL players financially devastated.

The last argument in this whole saga points to Vice President Pence’s expensive protest, in which he flew across the country and back, then walked out of a game in Indiana before it even got started. If your personal convictions have no place in your workspace, then where do owners get the right to require you to perform a certain posture in a ceremony against a citizen’s conviction? Colin Kaepernick kneeled in taking a stand for a conviction. This honors the flag more than Donald Trump — who managed to escape service to the country and flag he says must not be disrespected. Brutally shooting down unarmed Black men and expecting a Black man who happens to play ball to be silent is similar to behavior that took place on American plantations. Unless we are so institutionalized that we accept this model of living, we should all take a knee in standing for the principles documented in the country’s Constitution.