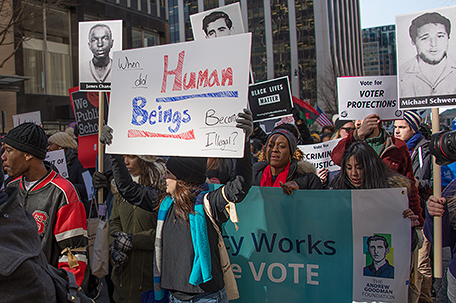 The cry “Our Lives Matter, Our Votes Count!” came out of the recent national NAACP national convention that addressed two hot button themes facing us this election year.

All lives should matter. But if that were truly the case, the NAACP wouldn’t need to exist. The nation’s oldest Civil Rights organization was formed in 1909 due to a 1908 incident involving a Black man accused with killing a white police officer in Springfield, Illinois. Once arrested and jailed, a mob of whites too impatient to allow the legal process to take its course, subsequently broke into the jail, took the man and lynched him while shooting him nearly 100 times.

Since that time, the NAACP led the Anti-Lynching movement and fought against the disenfranchisement of Blacks denied the vote. Because of some of the fights we’ve had to take on today, it feels as if we’ve come full circle or have never left the place that we were 107 years ago. Police are being ambushed and gunned down. Black people are dying at the hands of police at a rate similar to the infamous 100 years of lynching.

Many Black people who would have gone through life unknown have a national profile because their deaths at the hands of police have placed them on a national stage. The names of Trayvon Martin, Sean Bell, Sandra Bland, Michael Brown and Eric Garner will go down in our recent history. We now have a galaxy of Black men, boys, women and girls that belong to this club with a growing membership.

The count in 2015 alone records shows 776 people have been killed by the police. At least 161, or 20 percent of these fatalities, of the people involved in these shootings were unarmed when killed. These figures were secured by one of the only reliable databases of this kind because false data is being circulated. Statistics showing that 81 percent of the Whites murdered in this country are killed by Blacks is a false report. Department of Justice statistics show that more than 4 million Whites were victimized in 2015 and 56 percent of these crimes were committed by other whites. Whites are 6 times more likely to be killed by another White person and through successful de-escalation techniques they are less likely to be killed by police. Nevertheless, a Black person is killed by a police officer every 28 hours, despite making up only 13 percent of the nation’s population.

When we talk about things like this, there are always attempts to paralyze the conversation with a perceived insensitivity to the lives of policemen, which simply isn’t true. The life of a police officer has value in the community. The work that police do is dangerous, and this is no attempt to minimize that risk, but studies show that roofers, farmers and pilots face similar levels of danger. When a traffic stop, a 911 call, or casual stop and frisk on the street by a policeman can result in your heading to the morgue there is good cause for public alarm! The NAACP advocates for a special prosecutor in any case where a law enforcement officer discharges their weapon that wounds, injuries or kills any citizen regardless to race, ethnicity or color.

This election year comes at a critical crossroads for African Americans in that our votes will not only count but will play the deciding factor in states like Pennsylvania, which has 21 electoral college votes in play. The Democratic Party can’t hope for a win in the Commonwealth without the Black vote and Republicans know that the only way they can win is if we stay home. The five-county Philadelphia region will play a crucial role in either case. Currently, there are 1 million plus registered voters in the City of Philadelphia, and only 120,000 of those are Republicans. This leaves roughly 812,000 registered Democrats and 81,000 in the growing number of those without party affiliation. Because turnout in past elections has been pretty abysmal, (less than 30 percent of Philadelphia’s eligible voters bothered to vote in the Mayor’s race), things aren’t promising.

I was in a small town in the Western part of Pennsylvania watching as 6,000 Democrats changed their registration to Republican with the intention of voting for Donald Trump. The Rand Corporation revealed that nearly 10 percent of the primary voters for Trump are people who voted for President Barack Obama in 2012. Because voters frustrated with things like student loans, vanishing job opportunities, terrorism at home and abroad, and healthcare concerns, Pennsylvania may not be an easy win for the Democrats.

The vote for Black people has come at a heavy cost. The humiliation of literacy tests, the poll taxes and even the price of our lives are all factors influencing our approach to this election. Two of the Civil Rights struggle’s early martyrs were Harry T. Moore, state president of the Florida NAACP and Medgar Evers, field secretary of the Mississippi NAACP. Moore’s home was bombed by the Ku Klux Klan in 1951 and Evers was gunned down in 1963.

Our lives matter! Our votes count!