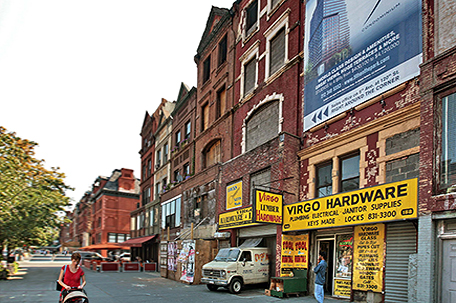 ABOVE PHOTO:  As in Philadelphia, gentrification has effected many major cities including NYC. A billboard above a local hardware store on Malcolm X Boulevard in the Harlem neighborhood of New York advertises new condos for sale a block away from Marcus Garvey Park from $400,000 to $4 million, in 2007. In a clash of cultures, gentrification continues to impact Harlem as drummers, who have been playing rhythms on African drums in Marcus Garvey Park since the 1960s, were forced to relocate after nearby condo residents called police with noise complaints. (AP Photo/Bebeto Matthews)

Have you seen revitalization come to a neighborhood near you? Has there been a change in your property tax obligation?

Then you probably have experienced the sting of gentrification that has spread nationwide and is redesigning Philadelphia. This city’s efforts to reshape the social landscape has intensified 18 times since the year 2000.

Gentrification is typically described as interest in a certain environment usually populated by residents with both longstanding and unfortunately scarce resources to fight off what’s coming. Etymologically, “gentrification” derives from the word “gentry”, meaning of gentle birth. This practice can be traced back to ancient Rome and 14th century Europe. Ruth Glass, a British sociologist advanced the term “gentrification” in 1964.

In communities undergoing this social, economic and even cultural process, property values and average income increase at a rate that increases to a level that won’t allow poorer residents to keep pace with skyrocketing rents and taxes. This results in displacement, relocations and cultural economic shifts that look like improvement on it’s face, but casts out people who spent years in these areas of town. The real effects are communities with low value moving to high value at the cost of devaluing people’s lives; the same people whose long years of working never netted them loans to both repair and improve existing properties, making them victims of the spread between  what your property is worth and what it could be worth.

The nationwide de-industrialization of urban centers left many blue collar middle-aged wage earners without employment and properties abandoned and lost. These areas are always ripe for developers and investors who benefit from capital and convenient property tax break legislation. Areas like Point Breeze and North Philadelphia were targeted for expansion years ago, but citizens are only witnessing the execution of this expansion now. Community cries though present are more smoke than real fire. Developers know that more law is on their side as seen in a recent court ruling against the city for closing down a beer garden. As I write this article, a zoning hearing is already scheduled to shape new laws or reinterpret old ones to allow for this outdoor speakeasy despite the fact that longtime residents of these same neighborhoods would be served with a summary citation for sitting on the front porch of the house they own and pay taxes on while drinking a beer. Residents are all but voiceless, powerless and defenseless in the face of this community insult.

To be fair, there are some positives to gentrification. You begin to stabilize an area in decline and lessen the strain on local infrastructure. A good social mix combats concentrated poverty and the burdens on city services. Increased property values are also a benefit and can turn your house into an even greater asset, thus increasing your wealth. A reduction in crime is also a positive and should encourage people to stay right where they are. The combination of these factors is supposed to increase your purchasing power with business establishments and, you would think, your ability to get home improvement loans through local banks.

The opposite is too often true. Though stability can come to an area, your individual circumstance may be a more unstable and desperate situation. If you become unemployed or underemployed, it could destabilize your household. Elderly persons on fixed incomes aren’t well-positioned  to handle sharp increases in real estate taxes and cannot hope to get the extra capital needed to engage contractors for real home improvements, so they become the prey of developers who try and harass them to sell their property for much less than it’s worth and accept a small sum to relocate. The intended community mix that was promised really becomes the richest ghetto community in history. Too often the residents change from Black to white, lower income to higher income or rich compared to poor.

The sense of powerlessness amid the impossible must be fought however. Our real power is in our own ability to control ourselves. Of course we have to refuse to sell and we must refuse to shop in stores that aid that scheme. When you stop cooperating with these forces, the people who plan these things find out through your lack of cooperation just how badly you’re needed for their plans to work.

We have to begin to make our own neighborhoods decent places to live! We have to rethink how we see ourselves and that will cause us to rethink how we see our possessions. If I see your value, I’m not likely to commit a crime to bring you injury, lost or harm. A good neighborhood clean-up that will allow us to reset and apply our vision of great possibilities also couldn’t hurt.

Our world can change if we are willing to change ourselves to make a better community. I could say so much more pro and con on the subject, but it’s better to end with a saying I always convey in my emails that “people will do great things when people are made to see their greatness.”