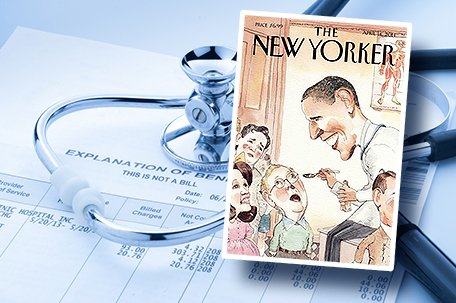 ABOVE PHOTO:  The current cover of the New Yorker magazine with a nod to President Barack Obama’s success on Affordable Care Act.

Some Democrats that are running for election or reelection in 2014 have gotten it right about President Barack Obama.  They have not taken Obama’s supposed plunged public approval ratings as political Gospel. They welcome him with open arms to campaign with and for them. Their enthusiasm for Obama was on full display during his recent campaign jaunt to Michigan.

Obama hit hard on an issue that is a crowd pleaser and one that has proven to have widespread public support even among many Republicans. That’s a hike in the frozen and absurdly low federal minimum wage. But that’s only the start. The relentless saber rattle by the GOP against the Affordable Care Act and its bank that beating up on the act is the sure path to victory for GOP Senatorial and Congressional candidates supposedly locked in races with Democrats in swing states has been a virtual political truism. The real truism is that the Act has been a smash success. The more than 7 million persons that dashed to sign up before the close of the first deadline now stands as astounding proof of that.

Its success was confirmed by poll numbers from the Kaiser Health Tracking Poll, released five days before the March 31 deadline to get coverage. It found that a clear majority backed the act, and less than a third urged its repeal. But even more significant, a clear majority in the poll also said that they did want the law scrapped, at worst, they wanted it improved. But the most significant finding was that a solid majority was fed up with politicians endlessly debating the worth of the Act.

This flies squarely in the face of GOP propagandists who have done a massive sell job in much of the media that the public is so dissatisfied with Obamacare that they can’t wait for the GOP to retake the Senate to try again to do away with it. Former President Bill Clinton wasted no words in blistering Democrats from trying to tap dance around and away from their support not just of Obamacare but of their decades of advocacy for comprehensive health care for all Americans.

Democrats could do one more thing. They could also aggressively counterattack the GOP’s half-baked claim that the Act will be a job killer and will send insurance premiums for all Americans skyrocketing through the roof. There is no proof of any of that. But by conceding these arguments to the GOP they tie their own hands in battle.

This is only the start of the Democrat’s error on Obama and the issues. An agreement on budget and deficit reduction and debt ceiling deals, unemployment insurance extension, rethinking the drug war, checking greenhouse emissions, and ending the grotesque income equality, and the need for bi-partisan congressional cooperation are just a few of the major policy issues that Obama has pushed and that a clear majority of Americans support.

Then there’s the issue of money. Democrats have had a comfortable lead over the GOP in campaign cash for the mid-term elections in the key swing states. But that lead has either shrunk or been completely wiped out in some of these states. The GOP has capitalized on the Democratic incumbents’ perceived political vulnerability and ratcheted up their pitch to donors. A big reason for the funding surge is precisely because Democratic candidates are ripped as supposedly dishonest, wishy-washy, and timid, in trying to mask their vote and support for Obama’s initiatives. The truth is that while Obama has touted these issues they are firm Democratic Party initiatives and have gotten the traction they have because they enjoy widespread popular support.

The recent Supreme Court split ruling has made matters even worse. It knocked out limits on the total amount people can donate to various political campaigns in an election season, This further blows the floodgates wide open for the wealthy to dominate local and national elections and makes it even more imperative that Democrats use every weapon they can to fatten their campaign coffers against the onslaught of dollars from conservative billionaires to the GOP. This is where Obama is a huge asset. He can help raise much needed cash for Democratic incumbents to counter the almost certain deluge of money that the GOP will garner in the fall.

Obama’s popularity numbers are down for the moment. But for most of his first and second term he has been popular and an enormously appealing president and campaigner. There’s no evidence that telling Obama to stay home or them staying home when he appears in their state will in any way transform a Democratic incumbent into a sure winner. Or, not appearing with Obama will transform them into a sure winner. However, for a Democrat, any Democrat, to flee in terror from the backing of a president who has gotten far more things right with the public, than his political enemies would have Democrats believe, is the height of folly. But at least some Democrats though finally get it right about Obama.