‘Selma’ got it right about Johnson, the FBI and King 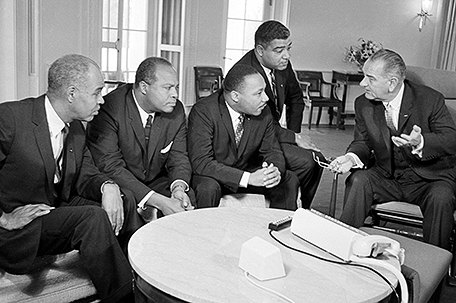 The debate is sharp over whether the movie Selma got it right about Lyndon Johnson and his relationship with and to Dr. Martin Luther King, Jr. A counter argument challenges the film’s depiction of Johnson as at best wary of King and his mass street action campaigns in Selma in 1965 and the South for the passage of a voting rights bill, and at worst outright hostile to King’s actions. This debate will likely rage for years to come. But even more worrisome, Selma strongly hints that Johnson aided and abetted if not an active plotter in the FBI Director J. Edgar Hoover’s dirty, illegal and covert war against King.

Whether Johnson knew every gruesome detail of Hoover’s assault on King is not known. However, there are tell-tail clues that Johnson’s involvement with Hoover’s covert campaign went deep. The first tip was his executive order on New Year’s Day, 1964 which in effect assured Hoover his tenure as FBI Director for life.

He reaffirmed that in November 1964 in a meeting with his then Attorney General Nicholas Katzenbach. Katzenbach had pressed Johnson to rein in Hoover’s wiretapping excesses. Johnson made it clear that he would he not take action against Hoover. He considered him a much valued source for information. That information was the steady stream of illegal wiretaps on the sexual antics and personal activities of any and every one from entertainers to Johnson’s political foes. The biggest haul of tapes though was those that Hoover had stockpiled on King. At the same meeting, Katzenbach explicitly told Johnson that Hoover was trying to peddle the tapes on King’s private doings to cooperative journalists.

At a follow-up news conference, Johnson feigned indignation at both Hoover and King and pledged to damp down the friction between the two. Hoover took that as a tacit endorsement and green light to step up his by then virtually open assault on King. That campaign went beyond simply collecting salacious tapes on King. As Selma graphically showed, Hoover sent one of the tapes purporting to show King in an adulterous sexual liaison to his wife Coretta Scott King. The tape was recorded and sent to Southern Christian Leadership Conference headquarters in late 1964 just about the time that Johnson again declared his support of Hoover.

Hoover’s brutal and systematic covert campaign against had a two-fold aim. One was to discredit King as the nation’s paramount civil rights leader and to discredit the entire civil rights movement in the process.

Hoover, and other top FBI officials routinely spit out these choice expletives about King “Dangerous,” “evil,” and a “colossal fraud.” They didn’t stop at name calling. They talked ominously of “neutralizing” him as an effective leader. And even more ominously they sent him a poison pen letter flatly saying “King you are done” and suggesting he kill himself.

Hoover assigned Assistant FBI director William Sullivan the dirty job of getting the goods on King. Sullivan branded King as the “most dangerous Negro of the future in this nation.” In his book My Thirty Years in Hoover’s FBI, Sullivan described the inner circle of men assigned to get King. The group was made up of special agents mainly drawn from the Washington and Atlanta FBI offices. Their job was to monitor all of King’s activities. Much of their dirty tactics are well-known. They deluged him with wiretaps, physical surveillance, poison-pen letters, threats, harassment, intimidation, and smear sexual leaks to the media, and even at the time of his murder, Hoover had more plans to intensify the spy campaign against King. Decades later, Sullivan still publicly defended the FBI’s war against him, and made no apology for it. The FBI patterned its spy and harassment campaign against King on the methods used by its counterintelligence division and internal security sections during the 1940s and ‘50s. The arsenal of dirty tactics they used included unauthorized wiretaps, agent provocateurs, poison-pen letters, “black-bag jobs” (breaking and entering to obtain intelligence) and the compiling of secret dossiers.

In the 1960s, the FBI recruited thousands of “ghetto informants,” for their relentless campaign of harassment and intimidation against African American groups. The bureau even organized its targets into Orwellian categories agents gave such labels as “Rabble Rouser Index,” “Agitator Index” and “Security Index.”

By the time Johnson assumed the presidency after John F. Kennedy’s assassination in November 1963, Hoover’s obsession with and campaign against King was in high gear. And the few times, Hoover’s campaign of slander and vilification of King was hinted at publicly, Johnson would shrug it off and reaffirm either publicly or privately Hoover’s absolute invaluable importance to him. What Johnson knew or worse authorized Hoover to do to thwart King will never be fully known. But as Selma pointed out, Hoover’s gutter campaign against King happened on Johnson’s watch, and he did nothing to stop it.