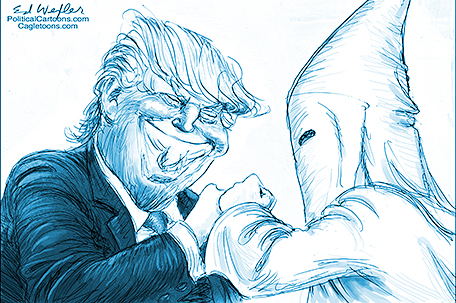 With the Charlottesville incident and Donald Trump’s presidency, the Republican Party’s chickens have come home to roost.

Forgive me if I find the recent Republican outrage to President Donald Trump’s response to the white supremacist march in Charlottesville, Virginia tragically disingenuous.

As Republican lawmakers like Florida Sen. Marco Rubio (R-Fla.), House Majority Leader Kevin McCarthy (R-Calif.), and House Speaker Paul Ryan (R-Wisc.) came forward to rightfully criticize Trump for his tacit approval of the Neo-Nazi groups that perpetrated the violence by not holding them responsible, the smell of the party’s hypocrisy has become overwhelming.

While watching Republican pundits on CNN, MSNBC, and even Fox News passionately decry former KKK Grand Wizard David Duke and other alt-Right racists praising President Trump on Twitter for not attacking them, I smiled sarcastically while shaking my head in disapproval.

That’s because the Republican Party has spent the last 50 years building a brand predicated on subtle and not so subtle racial dog whistles, especially in the South. With Trump, a man who was racist enough on his own, the Frankenstein Monster that the so-called Southern Strategy had been building is now finished.

Unfortunately for the GOP, it’s also out of control.

After President Lyndon Johnson signed both the Civil Rights Act of 1964 and the Voting Rights Act of 1965, he predicted that the Democratic Party would lose the South to Republicans for years to come mainly because of White resentment.

As a presidential candidate in 1968, Richard Nixon immediately seized upon that resentment in an insidious way. In a 1981 interview, the late Republican strategist Lee Atwater told us how it was done.

“You start out in 1954 by saying,’ Nigger, nigger, nigger,’ he said. “By 1968 you can’t say ‘nigger’—that hurts you, backfires. So you say stuff like, uh, forced busing, states’ rights, and all that stuff, and you’re getting so abstract. Now, you’re talking about cutting taxes, and all these things you’re talking about are totally economic things and a byproduct of them is, Blacks get hurt worse than Whites.’ We want to cut this,’ is much more abstract than even the busing thing, uh, and a hell of a lot more abstract than ‘Nigger, nigger.’

Ronald Reagan took the Southern Strategy to another level as both a presidential candidate and an officeholder. It was Reagan that constructed the narrative of the Black “welfare queen” who was siphoning off the hard-earned money from hardworking White people to justify cutting programs that benefited the poor and people of color. Even worse, the Black “welfare queen” trope kept poor Whites from seeing that the rug pulled out from under the feet of people of color was being pulled out from under their feet as well.

But anyone paying attention to Reagan shouldn’t have been surprised. When he announced his campaign in 1980, he gave a nod and a wink to state’s rights while talking with an all-White audience outside of Philadelphia, Mississippi. That Philadelphia was the place where three Civil Rights workers were killed in 1964 and that state’s rights was a phrase used by Southern politicians to justify their practices of systemic racial segregation and discrimination was telling.

Oddly enough, the man who first directed Trump’s 2016 presidential campaign, Paul Manafort, was also the same man who arranged to have Reagan kick off his campaign in Mississippi after the 1980 Republican National Convention.

Then there was the 1988 “Willie Horton” campaign run by George H.W. Bush. Horton, a Black prison inmate from Massachusetts that raped and killed someone while was on a weekend pass, was used to paint Democratic nominee Michael Dukakis as soft on crime, another popular Republican dog-whistle that connects crime with Blacks as a means of playing up the fears of Whites.

In recent times, Republican lawmakers, especially in the South, have enacted policies to neutralize and nullify the Black vote through gerrymandering districts and coming up with Voter ID laws designed to keep Blacks from the polls.

While the Southern Strategy was subtle at first, the election of Barack H. Obama as the nation’s first Black president ripped the veil of subtlety completely away. Between conservative news outlets like Fox News calling Obama “un-American,” to the Birther Movement that led to the rise of Trump, the Southern Strategy went from being a subtle appeal to White resentment to a more ‘in-your-face’ one.

Throw in a healthy dose of encouraged violence with Trump’s demonization of Mexicans, Muslims, and anyone who wasn’t White, male, and aggrieved, and you’ll get a campaign that remixed the Southern Strategy in a way that would make hip-hop legends DJ Cool Herc, Grandmaster Flash and Afrika Bambaataa green with envy.

The bill has finally come due for the Faustian bargain that the Republican Party made with the Southern Strategy 50 years ago. Because they played to the racial resentments and fears of White people, they now have a standard bearer who openly provides aid and comfort for the views of neo-Nazis, Klansmen, and White nationalists.

If racism and bigotry really have no place in the Republican Party, it needs to pull the splinter of its own eye and apologize to the people of color it has demonized to win votes.

The GOP needs to take responsibility for the Monster they created.

Maybe Tiki torches can help them get the Monster in line. I mean hey, it worked with Frankenstein.

The 2016 GOP Convention: The whitest of the whitest conventions