Secret Service and the Trumps – hypocrisy and hubris 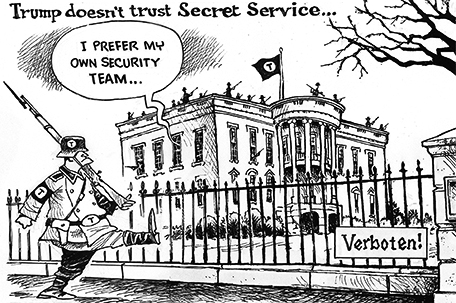 The “budget lite” that our 45th President submitted is described as a “budget blueprint to make America Great Again.”  Submitted in the third week of March, it trumpets draconian cuts in many federal programs, eliminating some that provide important services, including the African Development Foundation, the Corporation for National and Community Service, the Inter-American Foundation, the US Trade and Development Agency, the Legal Services Corporation, the National Endowment for the Arts, the National Endowment for the Humanities, the United States Interagency Council on Homelessness, the Woodrow Wilson International Center for Scholars, and many others.  The cuts are so unfathomable, and so extremely severe, that even some of 45’s allies are biting back.

Former Arkansas governor Mike Huckabee, whose daughter Sarah Huckabee Sanders is Deputy White House Press Secretary, has written an op-ed in the Washington Post that argues that the National Endowment for the Arts, which he describes as “just 0.004 percent of the federal budget”, is important.  He says that students who participate in the arts have higher grade point averages and standardized test scores.  He reminds us that NEA grants went to about 16,000 communities, and that some young people only have access to music and the arts because NEA is in their communities.  He also highlights NEA as an “economic driver” because the arts create jobs.  Says Huckabee, “the arts are a $730 billion industry, representing 4.2 percent of our gross domestic product which equals more than transportation, tourism, or agriculture.”  Huckabee, ever the conservative, says he doesn’t want his tax money to fund things that don’t work, but he notes that the $147.9 million allocated to NEA in 2016 is not wasted money.

It seems strange that just 60 days into the game, 45’s head of the Office of Management and Budget (OMB), former Congressman Mike Mulvaey (R-SC) has deemed many programs “ineffective”, “inefficient”, or ‘lacking evidence that it is being effectively implemented.” What evaluation has been done?  Who has made the determination of inefficiency?  Based on these blanket assertions, some Republicans have indicated that the OMB determination is not right.  Former Senator Bob Dole (R-KS), a Republican Party stalwart, says it is short-sighted that 45 would eliminate the McGovern-Dole International Fund for Education program, a program that provides school meals for children in 40 of the world’s most impoverished nations.  Dole told the Washington Post that eliminating the program would “have a disastrous effect on the planet’s most vulnerable children”.  He called the program, which he developed with across the aisle Senator George McGovern (D-SD) as “one of the proudest achievements of his lifetime”.  Our 45th President is so eager to provide $54 billion in extra money for the Department of Defense that he is willing to throw a party stalwart’s legacy under the bus.

Meanwhile, the Secret Service has asked for $60 million more this year to protect 45 and his family.  The 45th President was a frequent critic of President Obama’s golfing, a pastime that he engages in frequently himself.  And he can’t seem to find any golf courses in the DC area, so he’s back to Mar-a-Largo, where taxpayers spend $3 million every time the President goes to his private resort.  Mr. Trump is not trying to tighten the belt he wears; he is only trying to tighten the nation’s.

Because Melania Trump likes to keep distance between herself and her husband, taxpayers are paying about $150,000 a day to protect her and their son, Baron, in New York.  The same man who said that the Obamas should consider living in the White House “a privilege” has not convinced his wife of the privilege that has been bestowed upon her.  Instead, we taxpayers will spend $4.5 million a month protecting Melania and Baron in New York.  New Yorkers will spend even more, and they have not been reimbursed for the cost paid when New York police officers are diverted to deal with the Trump family baby-sitting project.

The most egregious part of the scam that allows 45’s family to be protected is the fact that his wildcat sons —  traveling the world to generate profit for the Trump brand — are protected by Secret Service with our tax dollars.  When they go to Dubai to celebrate a new Trump golf course — which is a profit generating opportunity for the Trump empire, taxpayers cover the cost of their “protection”.  If the Trump empire gained a profit from that trip, shouldn’t it reimburse United States taxpayers for the expense of protecting these entrepreneurs?

Then there is Ivanka Trump, who says she will “voluntarily” comply with ethics rules.  Balderdash!  This woman has a West Wing office and security clearance; she has avoided nepotism laws and she not only has her father’s ear, but she has been allowed to interact with some of the most powerful people in the world.  What will she do with this portfolio when 45’s sun sets, either through impeachment or resignation?  Is she being set up as another Trump profit center?

The Trump family is playing our country as if we are their personal piggy bank.  They get security that they ordinarily wouldn’t get.  They are maximizing profits that they ordinarily wouldn’t receive.  They are playing the capitalist game as it has never been played, merging economics and politics for their benefit.  And too many of us are silently accepting this egregious exploitation.

Julianne Malveaux is an economist, author, and Founder of Economic Education. Her podcast, “It’s Personal with Dr. J” is available on iTunes https://tinyurl.com/withDrJ . Her latest book “Are We Better Off: Race, Obama and public policy is available via amazon.com For more info visit www.juliannemalveaux.com