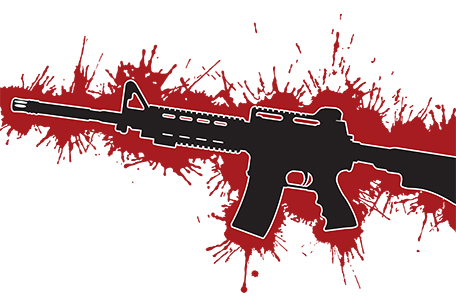 In Uvalde, Tex., an 18-year-old took advantage of a recent change to the law and bought two assault rifles and 375 rounds of ammunition not long after his birthday.  Last Tuesday, he opened fire at Robb Elementary School, killing 19 students and two teachers while police stood by outside and did nothing.

Ten days earlier, another 18-year-old killed 10 people at a Buffalo supermarket with a legally purchased Bushmaster semiautomatic. Variations of the AR-15 were used in massacres at a Texas Walmart in 2019, a Florida high school in 2018, a Texas church and Las Vegas concert in 2017, a movie theater in Colorado in 2012, and a workplace party in California in 2016.

Does any of this seem…familiar?  Redundant?  Avoidable?

Why does the so-called greatest nation on Earth allow undeveloped adolescent minds to purchase military grade weapons legally?  What is it about American exceptionalism that indulges the bloody fantasies of boys acting out as their video game heroes?

A nation that decided it could live with armed gunmen blowing away schoolteachers and little kids gave up on ending this insanity with stronger gun laws long ago. It’s every man, woman, and child for themselves. These days any fool can easily get a gun and openly carry it wherever they go, so Wild Wild West, anyone?

Meanwhile, back in Buffalo — you know that ancient history mass shooting event where a fanatical White supremacist drove 200 miles to kill Black folks —it appears a retired “federal agent” may have had a 30-minute heads-up of the impending slaughter, according to buffalonews.com.  Color me not shocked or surprised.

Who cares about the Hispanic children of Uvalde, Texas or the Black shoppers in Buffalo? Not this dysfunctional Congress or our barely functional president.  Our right-wing Supreme Court is poised to rule in a Second Amendment case to expand gun rights and here’s the message from our so-called “leader” — nobody in Washington is coming to put a stop to this bloody insanity.

Ban the AR-15. This isn’t an armed conflict against invading forces in Ukraine.

These dead kids don’t exactly fit the profile of the sort of children right-wingers are hell-bent to make women bring into this world, whether they want to or not. America prefers to let people die in insanely large numbers than impose any restrictions upon the easy access to any weapon a deranged madman might want to use to kill large numbers of women, men, and children.

AR-15’s are designed to destroy human bodies. They have no other purpose other than to turn living human beings into dead ones.

I have no illusions we can get 11 million AR-15s out of the hands of gun owners, and nobody is proposing we even try.  I read online where a gun owner said, “any weapon is going to inflict mass casualties if police are going to stand around for 45 minutes letting a madman rampage.”  That sounds true, but it’s a glib deflection. because a madman rampaging with a knife or a brick or a sharpened stick is not going to be able to kill dozens of people without some escaping and some fighting back.

Ban the AR-15.  You’re not part of a well-regulated militia.

Let’s see what the body count is at the next mass casualty event when the madman isn’t armed with a military-grade weapon. Once we’ve banned the AR-15, we can have that conversation about what to do about the rocks and sticks.

A few final thoughts:  Every U.S. Senator who stands against common sense gun reform should have to look at what they are opposing does to a child’s body. This is not to minimize in any way the murder of innocents in a school. What happened to those beautiful souls in Buffalo slipped out the news cycle much faster than Will Smith slapping Chris Rock, and I’m real tired of Black life being played so cheaply.

I get how the news hops from tragedy to tragedy like a bug on a hot stove, but some things don’t change even when the details do. WHITE SUPREMACY KILLS.

Ban the AR-15.   Your right to bear arms doesn’t come before the right of people to simply stay alive.

Divine Muva Diva: Empathy may just save a life

No more thoughts and prayers… We demand action!

Preparing for surgery? These tips could save your life