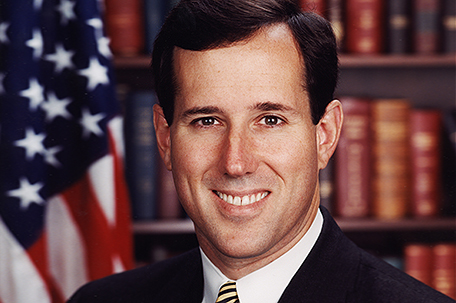 It was quite a run.

But that’s not going to happen in 2016. This remarkable string going back almost 40 years is over.

That’s because the runner up in 2012 was Rick Santorum, former U.S. Senator from Pennsylvania. Santorum is not going to be the GOP 2016 nominee.

Santorum still has his supporters, albeit fewer than in 2012. He has organized a fund-raising super PAC, put together a campaign staff, and is camping out in Iowa, the site of the first presidential caucus, along with a dozen or so other GOP hopefuls. They are all gearing up for what may be the longest, and hardest Republican nomination contest in a generation.

But Santorum is not going to win the nomination. In fact, he might not even meet the debate criteria set by Fox and CNN, the hosts of the first two debates. Having sat out the last three years in national politics, he is currently polling at 2 percent or less in the early presidential preference polls. Additionally, many of the staffers and fundraisers from his 2012 campaign have moved on to other candidates.

His biggest problem, however, is that his 2012 competitiveness was mostly due to an almost monolithic commitment from evangelical voters, a bedrock constituency in the Republican Party.

Evangelicals will still be powerful in 2016, but they no longer support a single candidate. Instead, Santorum must compete for the evangelical’s vote with former political stars like former Arkansas Gov. Mike Huckabee as well as fresher faces like Texas U.S. Ted Cruz, neurosurgeon Ben Carson and Louisiana Bobby Jindal. Portentously, Santorum’s initial forays to Iowa have not produced the kind of enthusiasm he generated in 2012.

If he can’t win in 2016, why he is running again? What does Santorum want?

One clue is his steady movement away from the polarizing issues he championed in 2012 – toward a more soothing brand of Republican populism that talks about jobs, raising the minimum wage, immigration restrictions and “fairness for working men and women.”

Clearly, Santorum is striving to make himself more acceptable to the mainstream GOP.  In a year in which Republicans might well nominate an “electable” moderate who could beat Democrat Hillary Clinton, Santorum is eschewing the polarizing cultural issues while styling himself as the populist conservative in the race.

Why would he do that?

Is he actually running for vice president?

No one is supposed to “run” for vice president, nor would anyone admit to doing so. But in fact, from the earliest days of the Republic, many candidates from both parties have run for presidential nominations hoping they might eventually be tapped for vice president. And many have been.

Recent examples include Joe Biden, Al Gore, George H. W. Bush, and Lyndon Johnson. Santorum himself in the midst of his bitter 2012 battle with Romney acknowledged he would accept the vice presidency if asked.

First, going back to his 16 years in Congress, he is one of the shrewdest, most tenacious, and ambitious politicians of his generation. He really wants to be president and his best path might be the vice presidency. Historically, 14 former vice presidents have become president; by far the most frequent way men have reached the presidency.

Second, Santorum knows he can’t win the GOP nomination. His base is too narrow, his funding is too fragile, and his competition is too numerous. In presidential terms, he is a fringe candidate.

Finally, Santorum knows that the eventual 2016 nominee will be an establishment figure, one deemed electable enough to defeat Clinton – perhaps Bush, possibly Rubio, maybe Walker – running on a jobs and economic growth platform.  Such a choice leaves the social conservatives out in the cold.

Santorum, though, intends to be there to make sure that won’t happen. Most social conservatives at least tolerate him. He’s one of them, and he will have spent the 2016 campaign burnishing his economic populism credentials. He can be the perfect balance to a ticket likely to need a lot of balancing.

Santorum could become the Dick Cheney of 2016—a stealth candidate few really support but everyone understands may be necessary.

The ideal game plan for him is to draw a respectable vote in Iowa, survive New Hampshire, and get through South Carolina. His objective is to be the last social conservative standing.

What kind of vice presidential candidate would Santorum be? Surprisingly, he might become the Republican version of incumbent Joe Biden. Certainly, Santorum is the ideological counterpart to Biden. He is as conservative as Biden is liberal, experienced in the senate, and equally as voluble – meaning prone to say almost anything at almost any time.

As Santorum kicks off his 2016 presidential campaign, two things are apparent. One is that Santorum isn’t going to win the 2016 GOP presidential nomination; the second is that it might not matter.

Politically Uncorrected™ is published twice monthly, and previous columns can be viewed at http://www.fandm.edu/politics. The opinions expressed in this article are solely those of the authors and do not necessarily reflect the opinions of any institution or organization with which they are affiliated. This article may be used in whole or part only with appropriate attribution. Copyright © 2015 Terry Madonna and Michael Young.

Politically Uncorrected: Rick Santorum- Why he lost Pennsylvania & what it means