Rio’s Favelas Are Anything But Olympic Fun And Games 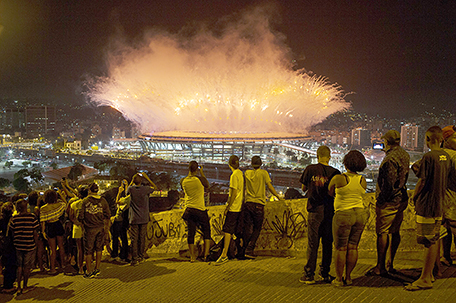 A main theme of the 2016 Olympic Games opening ceremony was a tribute to the favelas. This was every bit the spectacle of joy, fun and entertainment with perfectly choreographed break dancing, samba and street party type dancing and song the sponsors intended. The idea was to put a pretty face on Brazil’s best known and most notorious slums by showing that there’s more to the favelas than the murder, mayhem, drug wars and poverty that has been so pronounced that it regularly draws hordes of tourists to eyeball the sprawling hillside shanties.

Rio’s favelas were created in hillsides and swamps by fugitive African slaves in the late 18th century. They boomed after 1888 with the arrival of freed slaves who did not have anywhere to live, and were further populated by unemployed former soldiers and droves of rural poor escaping famine and drought. For decades since then, tens of thousands of Brazil’s mostly Black, mostly poor and totally landless laborers, driven by poverty and desperation, flocked to Rio and other cities and wound up in a favela. In time, the ramshackle, shanty dwellings for years that had no running water, electricity or heat were tossed up on the hillsides in and around Rio. There are about 250 of them in and around the city.

On the eve of the Olympic Games, nearly 1.5 million people live in the favelas, the majority of them are Blacks. The favela that overlooks Maracana Stadium, the main Olympic site, is a textbook example of the astounding impoverished living conditions. A mind- boggling less than one percent has ever attended a college. The average monthly income is slightly more than $200. The unemployment rate for adult males is close to fifty percent. The Brazilian official claim that there are fewer than 100,000 persons in this favela is a gross underestimate. The number that lives there observers say is double that.

Favelas got a lot of press– mostly bad– and became a major embarrassment to Brazilian officials when Human Rights groups roundly condemned the government for its wink and nod of Brazil’s sinister death squads. The squads were a mix of police, military and para- military killers who beat, tortured and murdered scores of favela residents under the guise of beating down and back the drug lords and gangs depicted as the scourge of the favelas and a menace to established order. It was terror, pure and simple, and the main victims were mostly poor, young Black males. The squads have faded from the news. But the rampant murders haven’t. Brazilian police kill more than 2,000 persons yearly almost all in and around the favelas. The UN Special Rapporteur on Extrajudicial Executions called these operations “murderous and self-defeating.”

The negative press and public embarrassment of the favelas has forced Brazilian officials to take some steps toward alleviating the worst of the conditions and abuses. There been a ramp up in investment in improving services, health care facilities and school in some of them. There’s also a pecking order of “rich” and “poor” in Rio’s big favelas. The homes of the better off residents have electricity and running water. They own businesses, and are skilled tradespersons, and professionals. They now consider themselves part of Brazil’s burgeoning middle class.

However this, doesn’t wipe away the continued stain of the poverty, neglect and systemic violence that the favelas are still synonymous with. Nowhere has this been more chilling than in the treatment of the children of the favelas. The rampant killing of children by police ignited a storm of international protest a few years ago when scores of children were abducted and killed. One group, the Juridical Assessors for Popular Organisations, submitted reports to the Brazilian government demanding that it honor its pledge under the United Nations Convention on the Rights of the Child to report on measures the government has put in place to protect children from violence and death at the hands of the police and paramilitary forces. The government stalled and dithered for a time on complying.

The government has made a show piece effort to try and clean up its badly tarnished image as the main purveyor of violence in the favelas by launching its version of “community policing.” This means employing a legion of resident– friendly officers on foot patrols conversing, interacting with the community and providing services. The jury is still way out on whether the kinder, gentler pacification effort will work. Many residents cheer the effort, but the old fears of the police haven’t died, and the military approach to fighting the drug gangs are still evident in many of the favelas. This also means continuing the killing that has marred the history of police relations with residents.

The big question, though, is when the Olympics end and the lights, cameras and the athletes are gone, will life be any different for the poorest of the poor who are still the majority in the favela that overlooks Maracana Stadium, as well as the dozens of other favelas in Rio change? The brutal history of the racism, poverty and violence that is the trademark of the favelas doesn’t offer a promising answer.

Rio readies for worst as terror threat hangs over Olympics